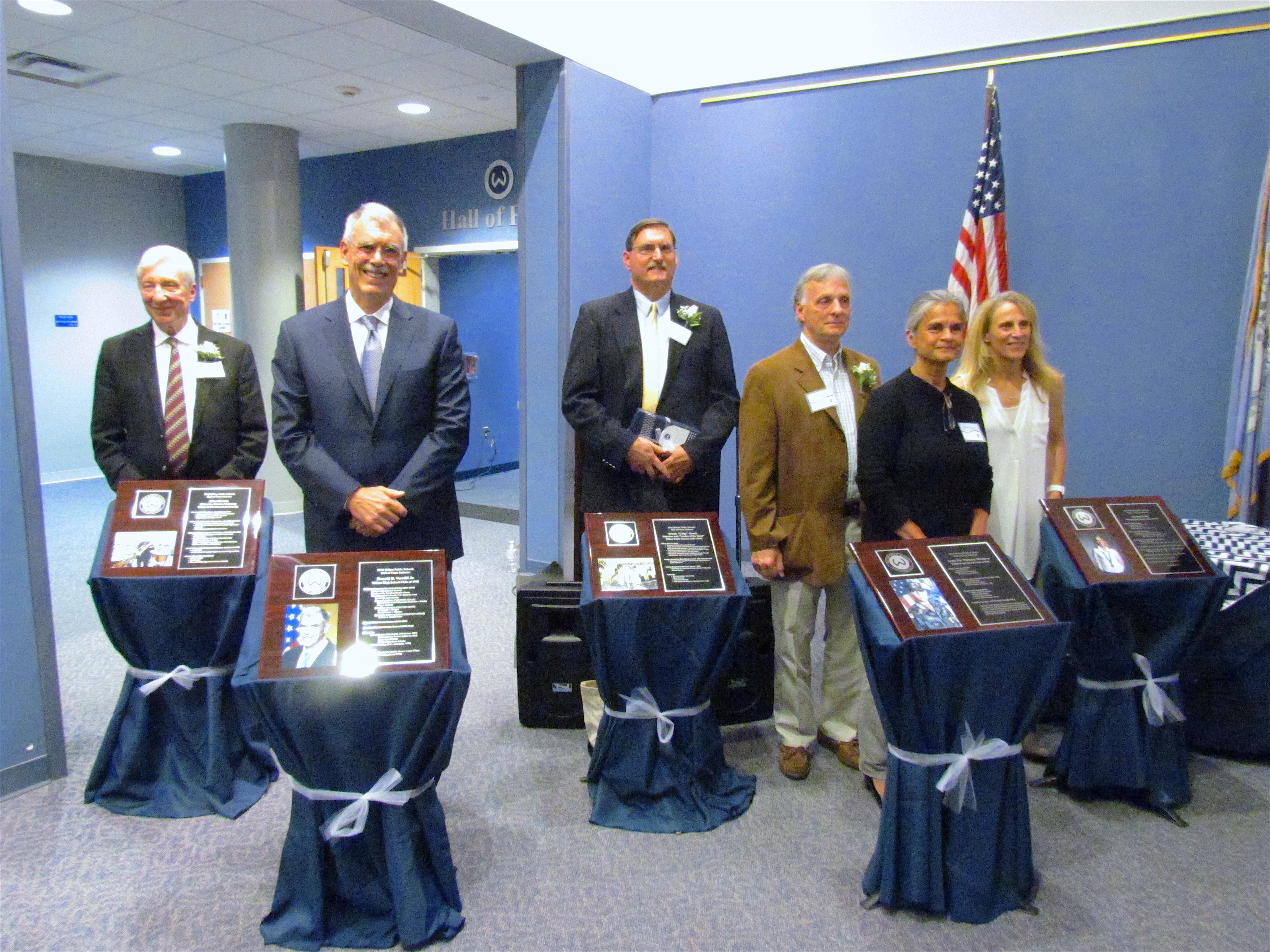 In one of the most memorable occasions in Wilton history, five incomparable individuals were inducted into the Wilton Public Schools Hall of Fame last night, in front of a packed house at the Clune Center Zellner Gallery. These five people–Kristine Lilly, Nicholas Madaras (posthumously), Donald Verrilli, John Rhodes and Frank ‘Chip’ Gawle–each have benefited and enhanced the Wilton community in his or her own unique way, but what was most on display last night was that the greatness of each individual was magnified by a magnanimity and grace that has made the wider world richer for their contributions.

Superintendent of schools Kevin Smith explained that induction into the Hall of Fame is the highest honor the Wilton Schools can bestow on an individual and meant to recognize the scope of their accomplishments and the lasting mark each inductee has made.

“Wilton is truly a community rich in tradition and excellence, and it’s fitting that we have a special place to pay tribute to those members of our community who have truly distinguished themselves and brought honor to us all,” he said.

In speaking about the soccer great, Wilton soccer coach Jim Lewicki recalled the first time he saw Lilly with a soccer ball.

“I didn’t know Kristine Lilly. I was about 24 years old. There was this girl in the field house, she was about 11 or 12, and I noticed she was just tooling the boys, scoring around them at will. I got upset and said, ‘A girl can’t do this,’ so I decided I would go on the field and show her a thing or two. She whipped me, and the rest is history. I realized from there, I know who Kristine Lilly is.”

Lilly was moved to reflect on what Wilton had given her, but just as awed by her fellow Hall of Famers.

“My life is in this place, Wilton is my home. Standing along with these other inductees, especially Nick [Madaras], who I never got  to meet, but knowing his father and his mother and everything he wanted to do around the world for kids is humbling to me. He’s the hero, we’re just trying to do good things. I’m honored to be inducted with him tonight.”

Tilly, the national, world and Olympic champion, reflected on just what Wilton has given her to help her achieve so much.

“The most amazing thing about this town, wherever I go, I run into someone I know from Wilton. This is a small town, a tight town and everyone supports everyone. Everything I did in my career to get to where I was at the highest levels of soccer happened. When I’m standing on a podium, receiving a medal, my hands in the air, I had Wilton with me the whole time. That’s what I was proud of, where I came from and what I learned.

“When I talk to young kids, and they ask, ‘What does it take to be the best?’ I always say, ‘You have to remember where you came from and you have to surround yourself with people that are going to help you get there–friends, family, coaches, all the youth father coaches. Remember all the people who helped you get there, because nothing is ever done alone. Being here I can feel the presence of this town and all the support I had over the years.”

Nick’s award was presented to his parents, Shalini and Bill Madaras, by his friend and soccer teammate Thomas Thresher. Like Nick, Thresher served in the armed forces and he reflected on Nick’s character that was consistent through his youth and military service alike.

Growing emotional at times during his remarks he shared with the audience how deep Nick’s generosity and compassion ran.

“A good soldier is loyal, tough (both mentally and physically), morally straight, honorable and selfless. In the army we call these the army values:  loyalty, duty, respect, selfless service, honor, integrity and personal courage. Nick truly lived it day in and day out. A lot of soldiers want to but they don’t; Nick did.”

Thresher also reflected on Nick’s soccer-playing career at WHS, recalling a 5-1 victory over another team. “As we walked off the field in celebration, Nick actually went and ran extra sprints because he thought the one goal Harding scored was his fault.”

Several of Nick’s fellow platoon members told Thresher how Nick was the first to volunteer for all work details, and the first to carry extra weight. “He consistently said, ‘you stay here and rest, I’ll do it.’ For Nick to have that attitude, it’s not something you get trained to do, it’s who you are.”

Most impressively, said Thresher, “Nick conquered the evils of a war zone with his love and compassion for the people of Iraq.” Nick’s legacy of helping people around the world through soccer lives on through the Kick for Nick organization founded in his honor and memory, and as Thresher explains, Nick, through the foundation, has literally changed the world and saved lives.

“It started as a net in front of the American Legion, and now it has sent more than 51,000 soccer balls to children in 46 different countries and we’re now starting domestically. They see an immediate decrease in violence in the areas where we hand out soccer balls. On more than one occasion, would-be insurgents handed in weapons in exchange for soccer balls to give to their kids. This isn’t a charity where people write a check for research they don’t know or a program they’ll never be affected by. This has an immediate and instant impact everyone can feel proud of. Nick’s legacy is one of triumph over evil.”

Superintendent Smith added afterward that with this induction, generations of kids will learn about Nick’s contributions.

Fellow inductee Chip Gawle spoke of Rhodes’ immeasurable impact on Wilton schools and the thousands of students who have benefitted from the music department Rhodes created when he began teaching in Wilton more than 40 years ago. Gawle put it in terms of key “Rhodesisms” that John would use for creating his system of “Traditions of Excellence” that shaped the way music is taught in Wilton.

Gawle impressed upon the audience just how much Rhodes has done over such a long period of time. “As the architect of our successful music program in Wilton, John’s vision of achieving and maintaining large participation rates in the core large ensembles of band, chorus and orchestra has been a driving force of our program over five decades. His insistence that we always strive to improve, no matter what current successes we enjoyed, served us all to keep reflecting and improving.”

Rhodes demurred and credited the “mosaic of people” he has worked with over the years, and thanked the community for the opportunity of doing what he wanted to do, without questioning why. “They trusted, and we built a huge trust for our program. We made our program central to the school and to the town. That can’t happen in a lot of other places. I’ve always credited Wilton as a great family town. Wilton is my home and I’m so thankful to have had this opportunity.”

Verrilli, the former solicitor general of the United States, was introduced by Board of Education member Glenn Hemmerle, who recounted the impressive list of contributions Verrilli has made to our nation’s history. Among them he noted Verrilli’s victories in front of the Supreme Court including, “…his successful advocacy of the Affordable Care Act, his successful advocacy for marriage equality, and his vindication of Federal immigration authority. He also achieved important victories in patent cases, and numerous cases in civil rights, women’s rights, and other matters of national importance.”

Verrilli humbly accepted the accolades, “It’s an incredible honor to be inducted with the other honorees. Kristine Lilly who has inspired a generation of women to believe there’s nothing they can’t accomplish, not just in the realm of athletics but in any endeavor; John Rhodes dedicated so many decades to one of the most noble professions in our society, being a teacher and contributing to the growth and maturation of our students is really extraordinary; and in Washington, most of us call ourselves ‘public servants,’ but to be honored alongside Nick Madaras puts it in perspective, you realize what real public service is, so it’s a special, special honor.”

He noted that he was a member of the first freshman class to learn in the current high school building. “It was a state of the art place, this was the coolest high school in the Northeast, and it got all these accolades. It was an amazing place to go to school, but not because of the building. What the building symbolized was the commitment of this community to educating its children and the importance of that, and the willingness of everyone in this community to sacrifice and make that commitment. That made a huge difference in my life–it gave me an unbelievably strong foundation throughout the world to do what I did.”

He continued:  “It’s evident from tonight that that commitment continues to exist. It’s incredibly important, so I’m very proud to still be a part of the Wilton family.”

Gawle was inducted in 2016 but last night was the official induction ceremony.

John Rhodes spoke on behalf of Gawle, who was the band director at WHS until he retired last year.

Gawle credited the community and students for blessing him with so many opportunities and recognized what he’s gotten in return from Wilton for everything he gave.

“This town could be a model for how education can work in the United States, not just in a DRG-A community, but everywhere:  strong parents, passion, commitment to each other, strong family, commitment to strong comprehensive programs in quality schools, these are things that make our country strong and will make us survive. I was so proud to be part of that, and Wilton still goes with me no matter what I do I also bleed Warrior blue.”