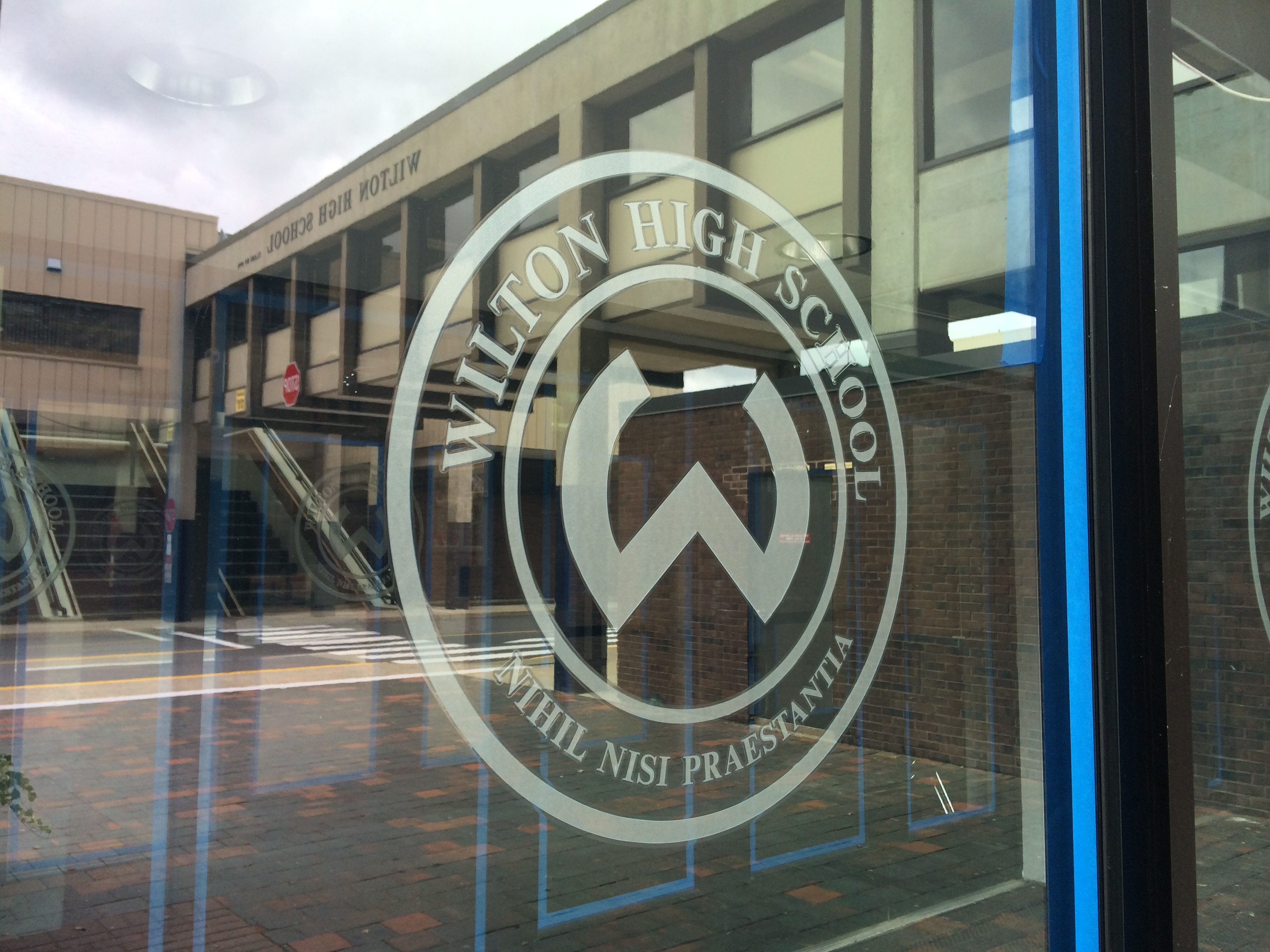 Following Monday’s incident at Wilton High School involving a swastika etched into a locker–reportedly by a student–school officials tried to move swiftly to get the situation in hand.

According to administrators, they learned about the anti-Semitic vandalism on Monday morning, Sept. 8, when they were alerted by the parents of students. “We acted immediately, identifying the locker, removing the locker and placing a new panel in front of the locker, and then began our investigation, which at this point I would describe as thorough,” WHS principal Robert O’Donnell said in a phone call with him, school superintendent Dr. Kevin Smith and GOOD Morning Wilton.

O’Donnell emailed a letter home to parents of WHS students on Monday evening, telling them about the incident.

The response from school officials seemed swift, and designed to be as least disruptive as possible to most students–so much so that some parents reported anecdotally to GMW.com that their high school children did not learn of the incident until after school hours when they were already at home Monday evening and O’Donnell’s letter arrived in email inboxes.

“Anytime an incident occurs, you have to weigh how you handle communication,” O’Donnell said. “Certainly yesterday the investigation was ongoing, it’s so important that you get the exact facts as you have them at the time, and then communicate them hopefully in a factual and upfront manner. The strategy of being able to have the students with their families to discuss what is an incident that touches us all very deeply, and may touch others in the school community even more deeply, they can have those conversations at home, and talk about those individualized needs, was certainly was one of our considerations.”

O’Donnell confirmed they did identify the “person we believe perpetrated the act.” He also confirmed that they are working with the Wilton Police on the investigation, which is still ongoing.

As for whether they could, in any way, identify the student they believe to have committed the vandalism–even by school year–and reveal whether he was in school on Tuesday, or what kind of repercussions he would face, O’Donnell told us, “I’m not going to get into the specifics, I can’t, it’s a privacy issue.”

Superintendent Smith added that there is a discipline policy in place that they follow. O’Donnell referred to the student handbook online for “specific infractions listed under the area where suspension may be warranted or further disciplinary consequences. There was more than one policy broken in this case. We’ve acted in a measured manner, and have implemented the policy.”

Given that some parents on the GMW.com Facebook Page have suggested they believe expulsion is warranted, we asked about what constitutes grounds for a student being expelled.

O’Donnell again referred to the handbook. “There are a couple of mandatory expulsion laws in the state of CT that could be implemented. That’s not right now what we’re seeing in this particular case. But that’s not to say that as this particular case develops, that may change. Right now we’re still evaluating the information and continuing the investigation.”

The principal did maintain that the students were safe when classes were in session on Tuesday. While he did not confirm the presence of added security, several parents told GMW.com that additional officers were at the school on Wednesday.

“We have certainly taken measures to ensure the safety of the school community today, at school,” O’Donnell did say.

The other focus right now, they say, is communication, with communities both inside the school–parents, students and teachers–and outside as well, including, O’Donnell says, “important members of the Jewish community.”

He has been in touch with both Rabbi Ron Fish at Congregation Beth El in Norwalk and Rabbi Rachel Bearman at Temple B’nai Chaim in Georgetown. “Our goal will be to take a transparent, collaborative approach. I’m interested in knowing what they feel is important for us as educational leaders, and advice they have in approaching this to be sensitive to all the members of the community,” O’Donnell said.

He also said that parents who are concerned can call his office, as many already have been doing.

But his prime concern, he says, is how to help the students process everything.

“It’s perhaps an overused term but this has to be a teachable moment for the students as well as the adults in our community. We’re fortunate to have a naturally embedded advisory program,” he explained, a system the school has in place to make a large school environment seemingly smaller.

Under the advisory program, smaller groups of same-grade students meet regularly with a teacher–in a ratio of 12 students to each teacher. Advisors are all certified educators. It’s meant to give the students a feeling of being recognized and valued and a connection to a “trusted adult whom they can go to if they have any concerns–social emotional, academic, personal, etc.”

On Tuesday, the advisors shared a statement from O’Donnell with the students, the goal of which, he said, “was to inform the students and to enlist their ideas and support of anything we should know about in the school, to address the current situation and devise a way to move together collectively.”

Notably, in that statement O’Donnell told the students: “The publication of hateful symbols makes us all feel ill at ease. We need to stand together against intolerance…. When discrimination is visited on any of us, it impairs all of us. We all need to be part of the solution.”

O’Donnell said their plan is to continue to offer readily available support for all students in an ongoing manner.

“Today, to be able to have a captive audience, in the presence of a certified educator, to discuss some of the sensitive topics, that’s one of the first parts of the strategy. We’ve been in touch with the civic and social instructional leaders in the building and the team of school counselors, and we talk about letting students know they have somewhere to go if they want to talk further. Hopefully the support personnel have developed relationships with the students and vice versa, and the extent we can have them reach out to the students who are more immediately impacted. We recognize we want to minimize time the students will be pulled out of class, and disrupt their education.”

School leaders are also considering more long term ideas, including special programs and curriculum-based changes. Coincidentally, there’s a program that was previously planned for November called Rachel’s Challenge, a program based on the writings of 17-year-old Columbine student Rachel Scott who was killed in the 1999 massacre at that school. According to the program’s website, it’s “designed to create a culture of kindness and compassion and to equip students and adults with resources to insure that their schools are safe, caring and supportive learning environments essential for academic achievement.”

O’Donnell also mentioned a speaker who conducts a program every year at WHS, Dr. Michael Fowlin, an actor and psychologist who addresses “issues of race, discrimination, violence prevention and personal identity,” according to his website. “He’s the most impactful speaker we bring in,” O’Donnell said, adding that they “try to have a systemic, longitudinal follow-up approach so it’s not just a one-off learning opportunity for students.”

Even with the programs, O’Donnell said he understands that incidents still can–and do–occur. “All of these measures you implement, something can still happen. To prevent it is ideal, but to have to deal with it is very troubling to the school community and we certainly recognize it.”

The administrators are measured in assessing how they see the students responding. “With 1,362 students, everybody feels differently. Part of what we’re hearing, is that this is not representative of our student body and school community; there’s some sentiment that it’s a very foolish mistake, that there may have been some spontaneity to it, that troubles them. Part of what I’ve heard from kids is that this is not what we’re about and we recognize where the line of behavior is and we try not to cross it.”

He also cautioned that, “from the administration’s perspective, we need to look systemically and broadly at the issue. If there are things we need to consider here, we will.”