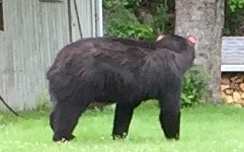 We’re in the Bear days of summer.  Seems Fairfield County is going to the Bears. We can hardly Bear it!

See what we did there? With bears popping up all over Fairfield County, including several reported sightings in Wilton, we just had to get in on that action.

Wilton 411 and local media have lit up with mentions of bear sightings in town over the last few days, with a cub spotted crossing the street near Orem’s Diner on and another report of a bear on Range Rd.. Those were topped off with another bear spotted relatively close to the Westport/Wilton border on Rte. 33. All three sightings occurred on Wednesday, June 24.

What’s more, those events follow a sighting last week on Glen Hill Rd., and another one two weeks ago on Rt. 7 toward Georgetown near Calico Corners. That bear is the one pictured in the main image of this article.

Of course, these pesky critters aren’t only being spotted in Wilton. There have been recent sightings in Norwalk, Ridgefield, Westport and Fairfield—including yesterday’s capture of a bear in a Fairfield tree.

If you’re as curious about the bears as they are about, well, bear things, then you can check the CT Department of Energy and Environmental Protection‘s (DEEP) “Bear Sighting” page. It shows the number of bear sightings in each town in the last year. So far, the list shows that Wilton has had eight sightings since June 27, 2014. But that’s a lot less than Avon, CT, which as of June 24 of this year had seen 430 bears in the last 365 or so days…a lot less.

So what should you do in the unlikely event that you do spot a bear? Unless there’s imminent danger and the bear is demonstrating erratic, threatening behavior, calling the Wilton Police actually shouldn’t be the first thing you do.

The DEEP Wildlife Division has some easy-to-remember tips, especially as it’s increasingly likely that there will be more sightings as more and more of the bears’ natural habitat is encroached by human development:

But let’s say you’re a runner or hiker who spends time on any of Wilton’s many trails, either alone, with others or walking a dog, what can you do?

According to the DEEP website, “DEEP suggests making your presence known by making noise and waving your arms. If you surprise a bear at close range, walk away slowly while facing the bear. Do not run. Try to stay calm as you make your retreat. Black bears will sometimes ‘bluff charge’ to within a few feet of you when they feel threatened. If this happens, stand your ground and shout at the bear. Do not climb a tree because black bears are excellent tree climbers. Make sure your dog is on a leash and under control.”

They reiterate that bears usually avoid people, but it’s likely that they’ve gotten more used to us, just as we’re getting more used to seeing them.

There are steps you can take to avoid attracting bears:

“Black bears are generally shy and secretive and usually fearful of humans. However, if they regularly find food near houses and areas of human activity, they can lose their fear of humans. Unlike grizzly bears, black bears are seldom aggressive toward humans.

“Females with cubs tend to have restricted home ranges which average 5 to 7 square miles in Connecticut, while males move about widely in home ranges of 12 to 60 square miles. The size of a home range varies geographically and often depends on the quality of habitat. Most ranges are used by more than one bear, but specific areas are rarely used at the same time. There can be some broad overlap between male and female ranges. In their home territories, bears may mark trees (called “bear trees”) along their travel routes by clawing and biting the bark. Black bears are good tree climbers and strong swimmers. They also can run up to 35 miles per hour.”