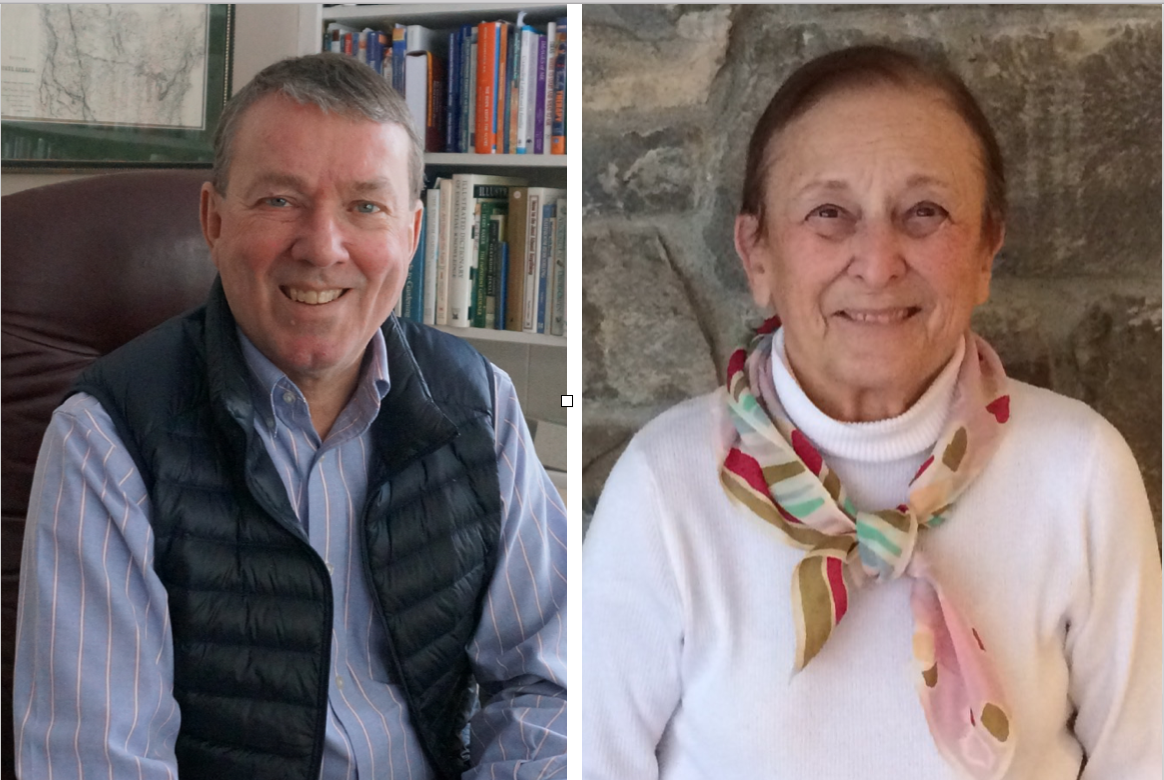 Wilton Democrats have scheduled their annual Spring Breakfast at Trackside Teen Center on April 1, from 9 a.m.-11 a.m.. They are inviting the public to attend.

During the event, the Democratic Town Committee (DTC) will present its highest 2017 awards on two longstanding contributors, bestowing the Lifetime Achievement Award to Virginia Benin, and naming Richard Creeth as the Democrat of the Year.

Benin has served the town of Wilton and the town’s Democratic party in myriad volunteer, elected and appointed positions for more than four decades. She won election to the Board of Education in 1981 and served there until 1990, including a term as its chair. She was elected to the Board of Finance in 1990 and remained on it until 2000. She earned numerous appointments to town building and school committees over those years, and sat on the Ethics Commission from 2009 until 2015. She has served on the boards of numerous town organizations, including the Wilton Historical Society (2013 to present), the Wilton Library Association (2001-2007), the Visiting Nurse and Hospice Board (2002 to 2008), the National League of Women Voters (1996 and 1997), the League of Women Voters (1975 to present) and the PTA (1974 to 1991).

“I do believe that one person, in concert with others, can make a difference,” said Benin. “Through the years, I was fortunate to work with many individuals interested in the broader good of the Wilton community who were effective partners in that pursuit. On a personal note, the commitment blessed me with friendships, greater knowledge of the issues that face us, and, at times, amusement, all adding up to profound satisfaction. I’m both grateful and humbled to receive this award.”

Creeth is a native of England who emigrated to the United States to work for Deloitte Haskins & Sells in 1979. He later co-founded the consulting firm Creeth Richman & Associates, which was subsequently acquired by QueBIT. He became a U.S. citizen in 1991 and cast his first presidential ballot for Bill Clinton. He joined the DTC in 1998, served as its chair from 2001 to 2003, and then running successfully for the Board of Selectmen, serving four terms until 2011.

As a selectman Creeth championed the cause of energy efficiency and was instrumental in the formation of the town’s Energy Commission. He was BOS representative on the Energy Commission and remains the commission’s co-chair. In 2013 he won a seat on the Board of Finance, on which he serves today. Creeth successfully introduced an enhanced mil-rate analysis model that makes it easier for selectmen and members of the Board of Education to gauge the impact of proposed expenditures on tax rates. Creeth is also a member of the Board of Education’s Operations Sub-Committee and served on the Comstock building renovation committee. He has been a member of the Trackside Board of Directors, as well as the BOS representative to the Wilton Commons board. He has also served on the Tri-board, comprising members of the Board of Selectmen, Board of Finance and Board of Education.

Creeth and his wife, Margaret, have three children, all now grown, assuring Richard of a few additional volunteer positions over the years as well. “Bringing up three boys who all went through the Wilton public school system has given me an opportunity to enjoy many hours coaching soccer, teaching Boy Scout merit badges and explaining the life of a consultant to high school students on career day. The DTC has introduced me to many friends in town and I am proud of my service, particularly as griller-in-chief at the annual DTC barbecue.”

The keynote speaker will be Dr. Jocelyn M. Boryczka, a Fairfield University associate professor of politics and co-editor of New Political Science: A Journal of Politics and Culture. Boryczka will speak on “Sex, Lies and Wiretaps: The Politics of Fake News.”

Tickets are available for purchase online, or using a check (with a downloadable order form). The cost to attend is $35 for adults if purchase online in advance, $40 at the door; $5 for children ages 6-18, and children 5-and-under are free.