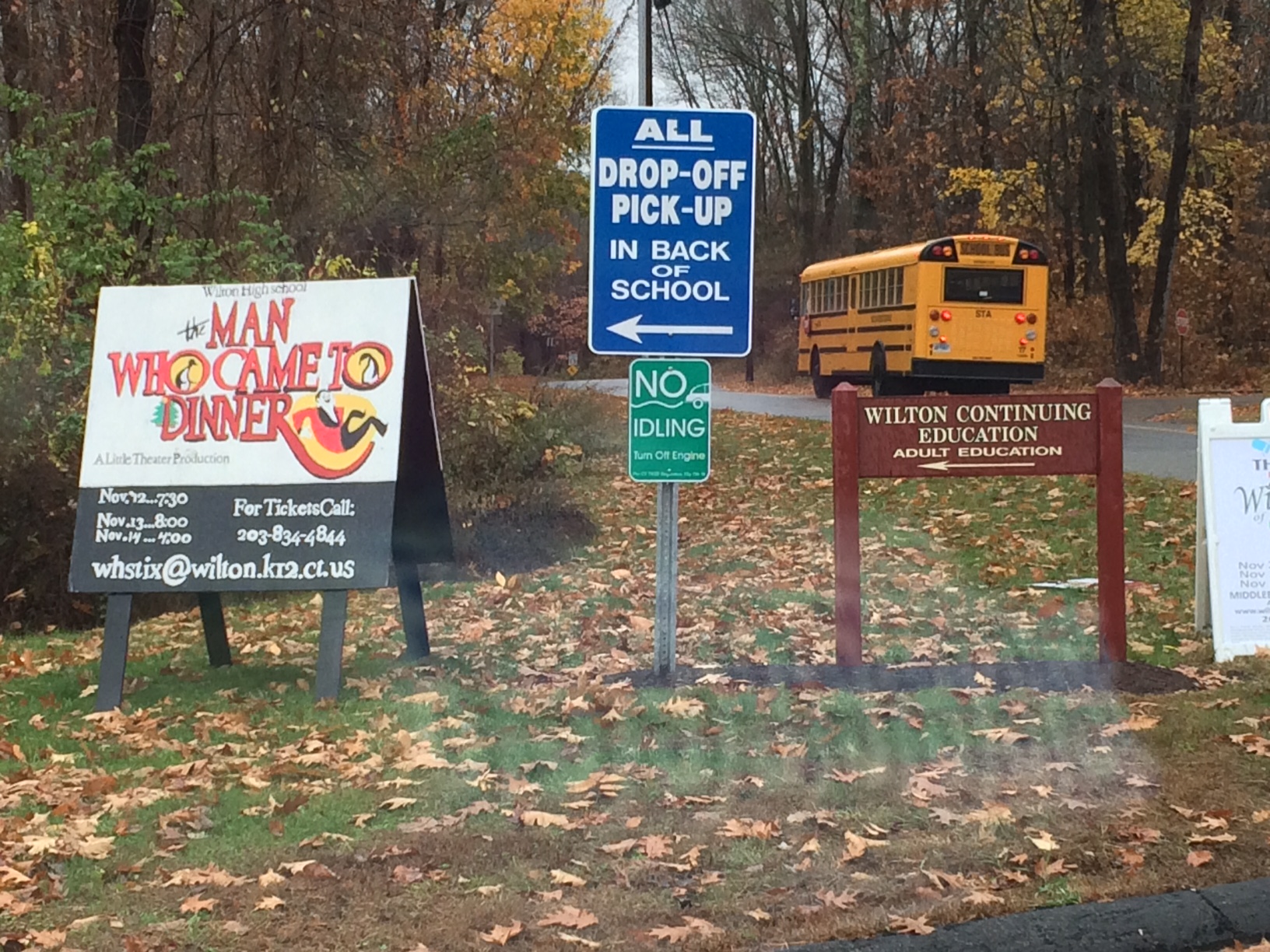 This summer, the Town of Wilton showed its strong support of Connecticut’s state law prohibiting unnecessary idling by adopting a town-wide No Idling Resolution. Proposed by Wilton Go Green (WGG) and unanimously supported by the Board of Selectmen, the new policy will help make our air cleaner, reduce carbon emissions that contribute to climate change, and save money and fuel.

On Monday, Nov. 16, WGG will kick off No-Idling Week. Look for green and white no idling signs prominently posted around town, instructing drivers to turn off their engines (except while sitting in traffic or in extreme temperatures). While signs will not appear in every parking and drive-up location, the no-idling resolution is a town-wide mandate.

Students at each of Wilton’s schools will participate in special activities throughout the week, learning about idling and climate change, making posters to help get the word out, and patrolling the pick-up lines at to remind parents to turn off their cars’ engines while waiting for their children to be dismissed. In conjunction with Sustainable America, a newly initiated online pledge drive allows residents to commit to reducing their idling behaviors.

In celebration of No-Idling Week, Wilton Go Green and the Wilton Library will co-host a special screening of the documentary, Idle Threat: Man on Emissions on Tuesday, Nov. 17 from 7-8:30 p.m.. A panel discussion will follow the film led by Katrina Kazda, Director of Programs, Sustainable America. Other panelists include Mary Channing, transportation coordinator for the Wilton Public Schools; Barry Bogle, director of health for the Town of Wilton; Walter Barozi, Bureau of Air Management, CT Department of Energy and Environmental Protection; and Alex Scaperotta, Wilton High School senior, WGG board member, a key initiator of the no-idling program.

Those not familiar with the tremendous toll idling takes on our air quality may wonder what all the fuss is about. After all, we’ve all idled from time to time, picking up children at school, waiting for a take-out order, sitting in line at the bank drive-up window or outdoor post box, even warming up the car before heading off to work on a chilly morning. So, what’s the problem with idling? It turns out, lots.

The emissions created by idling vehicles can have a direct effect on the health of adults and children who inhale the often-invisible exhaust. Increases in asthma, allergies, heart and lung disease, and cancer have all been linked to idling, and breathing exhaust fumes can damage brain cells and may contribute to autism. Children are particularly vulnerable because they breathe 50 percent more air per pound of body weight than adults. Connecticut has the highest mortality rate from lung diseases in the country, and Fairfield County received a D to F grade for air quality. Idling harms the planet as well, spewing toxins, chemicals and carbon dioxide (a noxious greenhouse gas) that contribute to haze, acid rain and global warming. In fact, an idling vehicle emits 20 times more pollution into the air than one traveling at 30 miles per hour.

Idling also hits our wallets — and hard. Americans spend a whopping $13 million every day on 12 million gallons of fuel wasted idling. Most cars need only 30 seconds to warm up, even in the winter, and leaving a vehicle running causes more wear and tear on its engine than turning it off and on again. The amount of fuel used to turn an engine on and off is equivalent to that used while idling a mere 10 seconds, and, contrary to popular belief, causes virtually no wear and tear on a car’s starter.

The Wilton School District, Wilton WMCA, and Wilton Library—along with many other businesses and organizations in town—have already pledged their support of the policy. Join them in keeping Wilton’s air clear by taking the No-Idling Pledge.

Remember: As Little People Big Changes—a Wilton organization of kids committed to reducing idling behavior—says, “If you’re stopped for more than ten, turn it off and on again!”

We all idle from time to time, picking up kids at school, waiting for a take-out order, sitting in line at the ATM drive-up window or outdoor post box. But did you know that breathing in exhaust fumes emitted by idling vehicles is linked to increases in asthma, allergies, heart and lung disease—even cancer—especially in children?

Idling also takes a toll on both our wallets and Mother Nature. If you idle for five minutes warming up your car in the morning, three minutes at the bank drive-thru, and four minutes listening to the end of an NPR story in your driveway, you’ve burned enough gas to drive 24 miles. And your car’s spewed 20 times more pollution into the air than if you were traveling at 30 mph.

Learn the facts about idling and support Wilton’s town-wide resolution to keep our air clean by taking the No-Idling Pledge.

I’m only idling for a short time.

The amount of gas used to turn your car off and on is equivalent to the amount used to idle about 10 seconds. So, if you think you’ll be stopped for 10 seconds or more, turn your car’s engine off then back on when you’re ready to resume driving. Contrary to what you may think, doing so won’t cause undue wear and tear on your starter. So, if you’re stopped for more than 10, turn it off and on again! (Little People Big Changes)

The cost of gas has gone down, so it doesn’t matter if I idle.

Gasoline prices have declined, which is good news for everyone. However, the harmful emissions created by idling vehicles – which include lead, formaldehyde, methane, carbon monoxide and more than a dozen other toxins – are as high as ever. Asthma, allergies, heart and lung disease, and cancer have all been linked to idling. And despite lower fuel prices, American’s spend a whopping $13 million every day on gasoline wasted idling.

I need to keep my child/children warm while waiting in the car.

Bundling kids up in a cozy blanket will keep them warm and breathing easier while you wait to resume driving. Breathing exhaust fumes can damage brain cells and may contribute to autism. Children are particularly vulnerable because they breathe 50% more air per pound of body weight than adults. Connecticut’s air quality is the worst in New England – over 10% of CT’s children have been diagnosed with asthma. Disconcertingly, Fairfield County’s air-quality grade is consistently in the D to F range, and mortality from lung-related illness in CT is the highest in the country.

I need to charge my cell phone.

Plan ahead and recharge your phone before leaving home. Most cell phones charge relatively quickly, so if you notice your battery is low while on the road, plug it in. Driving even a short distance should give your phone enough of a charge to keep you in touch.

I need to warm up my car on cold mornings.

When the thermometer drops, bundle up. As author and humorist Garrison Keillor said of life in Minnesota, where winter temps dip well below freezing, “There is no such thing as bad weather, only inappropriate clothing.” And today’s cars warm up more quickly when being driven than when sitting in a driveway. Avoid using automatic car starters, which significantly contribute to idling emissions.

I don’t want to slow down the line.

Restarting your car’s ignition takes only a moment and won’t delay those behind you. By not idling, you’re setting a good example for both your children and other drivers, and doing your part to help restore the quality of both the air we breathe and well-being of the environment.

I need to keep the car warm as I’m a limo driver and will be picking up a client.

Most cars need only 30 seconds to warm up – even in the winter – plain and simple. And leaving the vehicle running causes more wear and tear on its engine than turning if off and on again.

I didn’t realize that I left the motor running.

Changing old habits takes vigilance and a genuine desire to do what’s best for the planet and its inhabitants. Idling cars take a tremendous toll on air quality, resulting in increased school absences, ER visits, even premature deaths – all while degrading the immediate and long-term health of Mother Earth. Post a note on the center of your steering wheel, your dashboard – wherever you’re most likely to see it – reminding yourself to turn off your car’s engine rather than idle. Soon it will be second nature.

Will I be ticketed or fined for idling?

Connecticut law prohibits idling for more than three minutes. This applies to all vehicles, including school bus drivers, who may be ticketed for prolonged idling. While drivers of idling passenger vehicles are not subject to a fine, it is the responsibility of each of us to adhere to Wilton’s no-idling resolution, which serves to protect us all.

I’m concerned that stopping and restarting my car will wear out the engine more quickly.