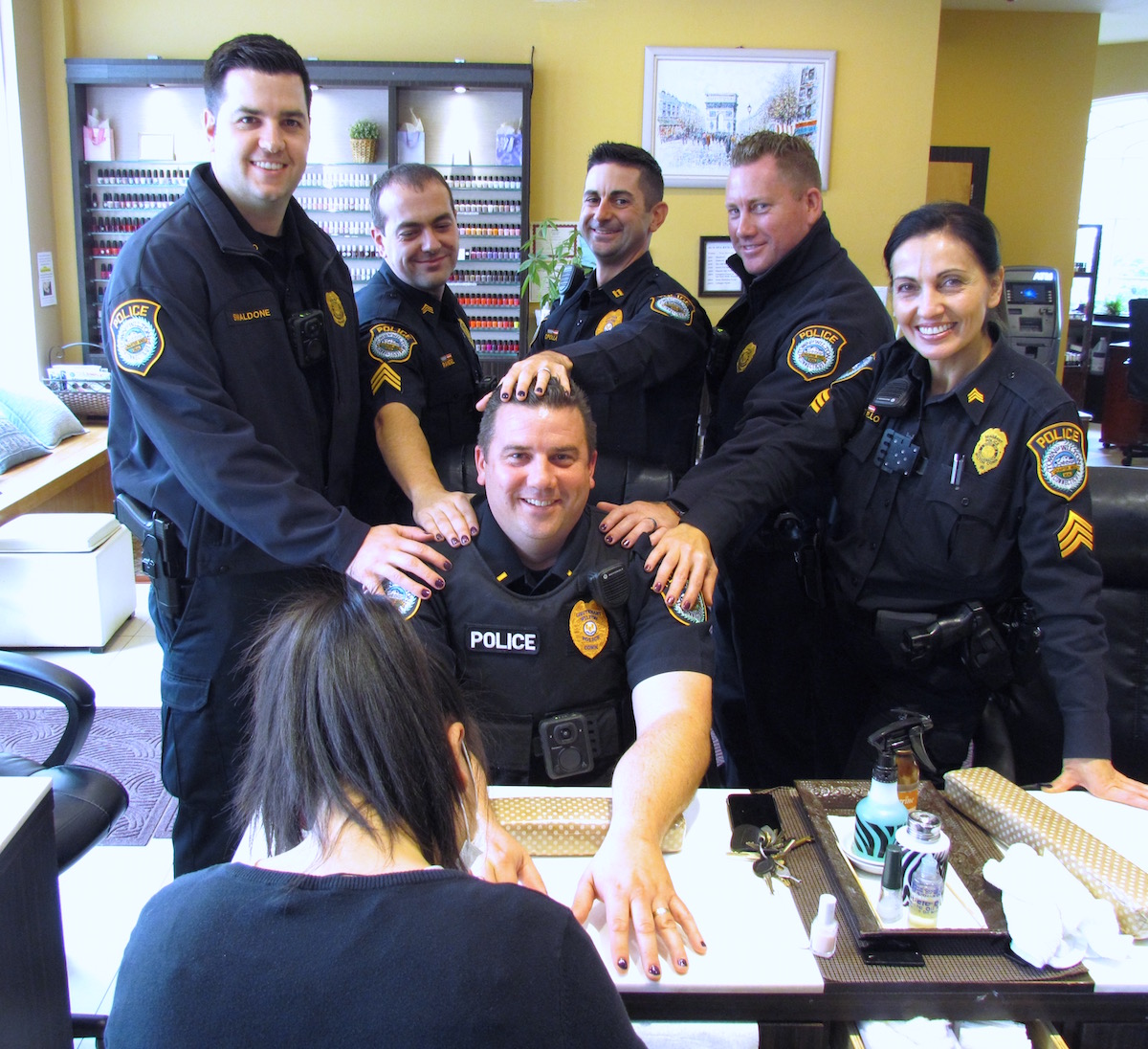 You gotta give a hand to Wilton Police officers, they’re willing to go the extra mile to keep Wilton safe–even if it means doing something a little nontraditional.

To raise awareness about domestic violence, a group of Wilton Police officers sat down at Sun Spa & Nails in Wilton Center on Monday morning to get manicures. They had the full experience–cuticle trims, hand massages, nails buffed and painted in vivid purple, the color symbolizing domestic violence awareness.

Captain Rob Cipolla sits on the Wilton Domestic Violence Task Force and has been a leading advocate in town to bring more attention to the issue. He had planned on being the only WPD member to man-up for a manicure, but when he threw out the idea at Monday’s morning meeting, several officers willingly pitched in.

He wasn’t surprised at how readily his colleagues accepted the offer, knowing they are willing to lend a hand to the effort. “We’re all police officers, we all deal with the issue of domestic violence in our day-to-day activities. It’s a good cause and everyone is out to support it,” Cipolla says.

So why manicures? He knew the visual would attract attention.

“We want to educate and bring awareness to the issue of domestic violence. Having six officers here having their nails painted is a good way to raise awareness. Aside from that there’s a financial component in terms of fundraising, to bring money to the Domestic Violence Crisis Center (DVCC), who do the real work in helping domestic violence victims.”

In fact, there are three salons participating in the effort this week. In addition to Sun Spa & Nails (151 Old Ridgefield Rd.), two other salons are taking part–Good Morning Nails (42 Old Ridgefield Rd.) and Mint Nail & Spa (16 Center St.) will be donating a portion of proceeds from every purple manicure and pedicure to the DVCC, now through this Saturday, Oct. 27.

“It just means so much to have that leadership within the Police Department, and having that statement out in the community,” says Jen McNamara, president of the Wilton Domestic Violence Task Force. “It’s a great role model for all the young males in our town.”

The idea originated with the members of Wilton Teen PeaceWorks, the Wilton High School club that works toward the same awareness-raising goals, targeted at a younger audience at WHS. “They came up with the idea about the nail salons, and then it was during a Task Force meeting when someone jokingly suggested Capt. Cipolla should get his nails done–it was more of a teasing aspect, but he actually made it happen. It’s really a testament to how committed he is, what a great person he is–and what a great sense of humor he has!”

Nail polish isn’t typically allowed as part of the strict uniform and appearance rules police officers have to abide by, but Chief of Police John Lynch had no issue letting the officers break protocol for the good cause. “He was supportive of the endeavor,” Cipolla says. “Unfortunately we deal with it frequently and bringing light to the issue in this capacity, it’s a good idea.”

The officers who raised a hand to lend a hand on Monday enjoyed their experience, especially knowing that it would drum up attention for a worthy cause.

“It’s a yearly thing to do a fundraiser to support the DVCC,” says Ofc. Robert Smaldone, who sits on the Wilton Domestic Violence Task Force with Cipolla. “It’s important to us to be out in the community, meeting new people and supporting issues that we deal with in town.”

Sergeant Steven Rangel agreed. “We want to be involved in the community and help out in any way that we can.”

For first-time nail salon customers, the officers were not only good sports but enjoyed the experience. “It’s nice to be pampered,” Cipolla laughed.

“I’m getting out of dish-washing duty tonight,” Smaldone joked. “I don’t want to ruin them!”