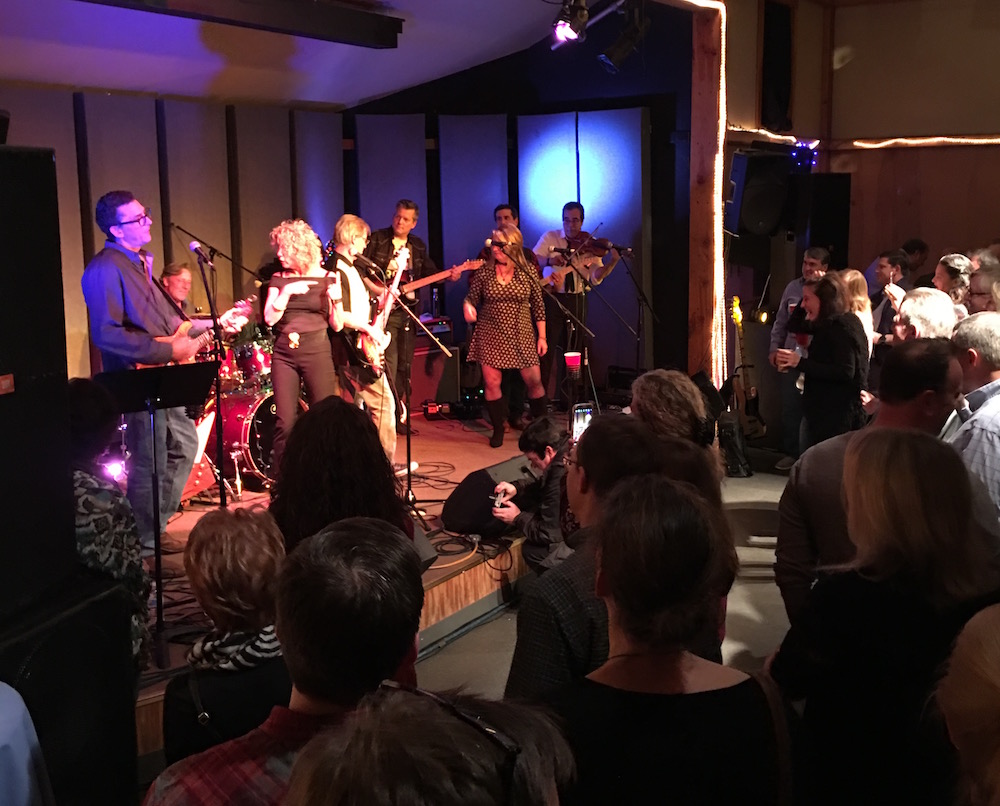 The hottest ticket in town is already sold out–selling out only two days after sales started. Wilton Rocks for Food, now in its third year of raising money for the Connecticut Food Bank and the Wilton Food Pantry, will take place Saturday, Dec. 2 at Trackside Teen Center.

But while tickets are sold out there are plenty of other ways to participate and help this fundraiser reach its goal of raising $60,000.

Wilton Rocks for Food is the brainchild of Wilton resident Andy Schlesinger. A lifelong guitar player, he had just left his band three years ago and was looking for something to do. He read an article about shortages at the CT Food Bank and had an ‘aha’ moment–recruit a few musicians, put on a show and raise a few bucks for a good cause. Schlesinger’s first call was to his friend and drummer extraordinaire, Brennan Gildersleeve, who immediately said yes. Schlesinger then posted a call for musicians on the Wilton CT 411 Facebook page. Several people suggested he contact a third Wilton resident, Dan Berg, who, although they had never met, agreed to play bass, and the Wilton Rocks for Food House Band was born.

Right from the first year, the response was strong–over 20 Wilton musicians reached out to take part in the event, in December 2015, which found 250 guests partying to over three hours of live music. More than 30 local businesses donated to the Silent Auction. The initial goal was a modest $10,000, yet by the end of the night, the first Wilton Rocks for Food raised $26,000.

After word got out about this amazing event, 2016’s event grew–30-plus musicians played four hours of music to a sold out crowd of 300. With over 60 local businesses donating to the silent auction and a growth in corporate sponsors, the Second Waltz raised over $48,000.

This year’s goal is to raise $60,000. All of the money raised goes to the charities–funds are evenly split between the two recipients. The entire event is put on by volunteers, which in typical Wilton fashion, are plentiful, ensuring the night is a success.

Meeting that goal is something Schlesinger is laser focused on, but he says it is something within reach. “The Wilton support is amazing. To sell out in less than two days says a lot about the people of Wilton.”

Despite general ticket sales being done, there are still many ways Wilton residents can contribute.

Donations are tax deductible and 100% of the money raised benefits the charities.

The Connecticut Food Bank provides food to hungry adults and children in six Connecticut counties:  Fairfield, Litchfield, Middlesex, New Haven, New London and Windham. More than 300,000 people in this area are food insecure; nearly 100,000 children struggle with hunger. Last year it distributed enough food to prepare more than 19 million meals; 17% of the population the Food Bank serves is food insecure and 44% of those families do NOT receive federal or local assistance because their incomes are too high to qualify. For many this is their sole support. Wilton Rocks for Food has donated over $40,000. The CT Food Bank gets a 4 out of 4 star rating on Charity Navigator.

The Wilton Food Pantry helps approximately 70 households per month. It’s almost entirely run by volunteers and funded by outside donors as the town only provides about 10% of its $100,000 per year budget. Over the past two years Wilton Rocks for Food has donated $35,000 to support Wilton friends and neighbors.