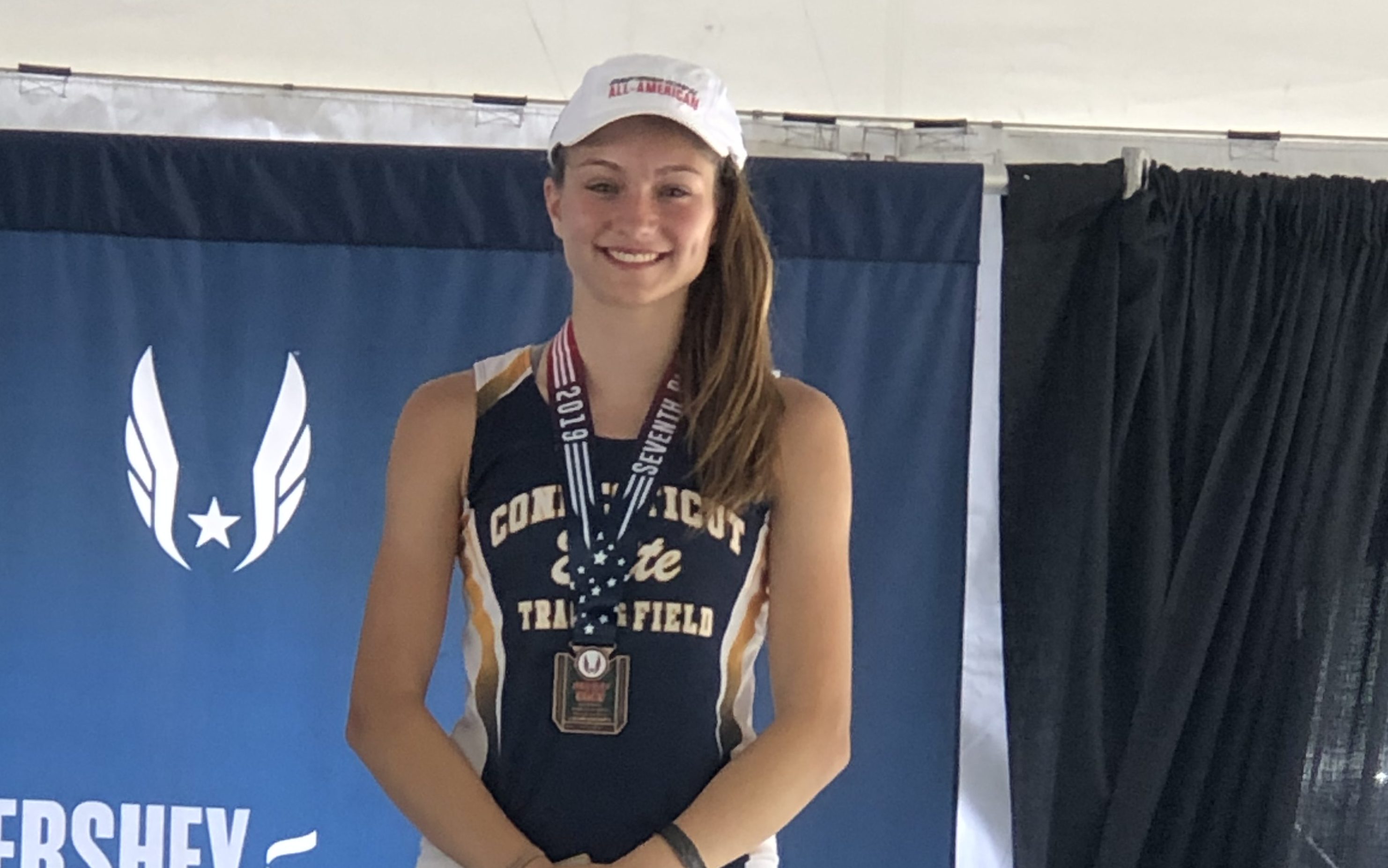 Several Wilton athletes traveled to Sacramento, CA last week to compete in the US Track and Field (USATF) National Junior Olympic Championships. Among the runners competing were a number who brought home All-American honors.

Shelby Dejana of Wilton, who competes for the Wilton-based Connecticut Elite Track and Field Club, was named All-American by placing 7th overall in the Heptathlon. Competing over two days in the event, Dejana set six personal records with the first being a first-place finish in the 200-meter dash in a time of 25.84 seconds. The second and third were in the Long Jump at 15 ft. 9 in. and the javelin with a throw of 68 ft. even. Her fourth personal record was in the 800-meter run on the final day of competition in a time of 2:33:52. She amassed 3,766 points which was 147 more than her previous record of 3,619 which she set at the USATF Region 1 meet earlier in July.

“Shelby had two basic goals going into the competition,” said her coach Kevin Foley. “The first was to finish in the top eight to make All-American and the second was to surpass 3,800 points. Had it not been for a couple of fouls in the shot put, she would have achieved both her goals.”

CT Elite had a second All-American in Emma Langis who took sixth place overall in the 400-meter hurdles. Langis’ sixth place time was 1:02:01. “Emma has run two times in the top 50 in the US in the 400 hurdles this year and took 2.5 seconds off her personal record in the last five- to six weeks,” said Foley. “Her preliminary and final times in Sacramento were just a shade off her best but still in the Top 60 in the US. Emma is a tremendous athlete and she had quite the fantastic post-high school season this year.” 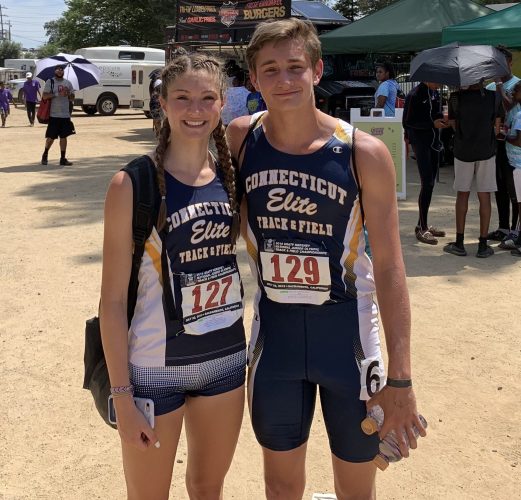 In addition to Dejana and Langis, Jack Myers (pictured here with Dejana) from Wilton competed in the 100 and 200 meter events at the national meet. His time 11.43 in the 100-meter left him seven places out of making the semi-finals and his 22.93 in the 200-meter was only four places out of a semi-final berth.

“I really cannot say enough about Jack and how he has taken to track and field in his first year. His times for a first-year guy are tremendous and he is still learning a lot about his events. If you want to keep an eye on an up and coming track and field athlete over the next couple of years, that would be Jack,” said Foley.

Also competing in her first national meet as a high school level athlete was Mariella Schweitzer who competed in the long jump and 100-meter hurdles. Schweitzer placed 21st overall in the long jump with a jump of 16 ft., 1 in..  “Mariella tweaked her back a bit in the long jump, which held her back in that event as well as the hurdles. She was a high school freshman this past year so I have no worries about her future and while she was a bit disappointed in her outcomes at the meet, she will be back better and stronger. She is another one to watch going forward,” said Foley.

Four members of the Wilton Running Club teamed up to run the 4×800 relay and placed 8th overall in a time of 9:05:06 at the USATF National Junior Olympics Championship in Sacramento, CA last week. Sam Kurian, Brian Gall, Danny Gall and Steven Hergenrother earned All-American honors by placing in the top eight at the national meet after winning the USATF Region 1 championship earlier in July. This team of 13-14 year old boys improved their time by 15 seconds in a little over a week. 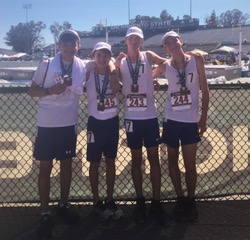 “We always have at least one very strong mid-distance runner in our club and it has been that way since the clubs inception. I have found that this inevitably leads to the development of a group a very strong runners and that is so for this group,” said their coach Mary Zengo. “They knew they were strong and had a chance to do something special as team and they all decided to not run their individual events and focus on the 4×800 and win together. They are a very special group of young men,” she added.

Zengo wanted to point out just how strong these athletes are: In addition to bringing home All American honors, Kurian, Brian Gall and Danny Gail ran the equivalent of a sub-five minute mile in the 1,500 meter race earlier in July at Regionals during the heat wave.  The Wilton Running Club now has eight athletes in 8th grade that have run under a five minute mile.

The Wilton Running Club is a Wilton-based club for middle school athletes and competes in the Western Connecticut Middle School Conference and USATF sanctioned track and cross country meets.