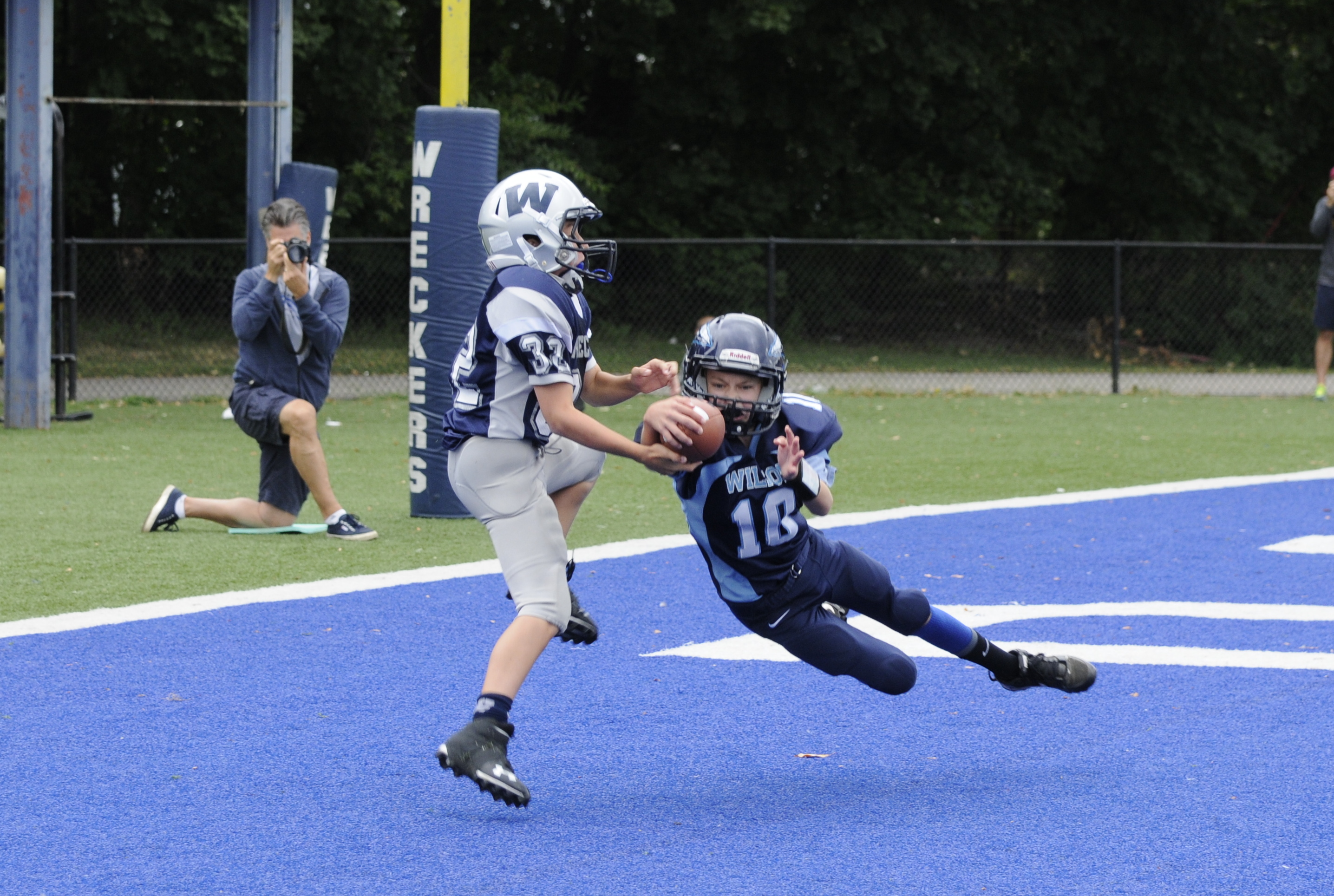 The Wilton Seventh Grade Blue football team stormed back from an early 6-0 deficit to defeat Westport North 26-12 on Saturday, Sept. 13 in Westport, with a relentless ground attack and punishing defense.

Westport won the toss and immediately took to the air, connecting on a long pass down the sideline that resulted in first and goal at the one. One play later it was 6-0 Wreckers.

Unfazed, the warriors struck right back, marching 70 yards on seven plays as the Warrior offensive line of Dominick Polito, Maden Herve, Jack Savarese, Jack Lenz, Jimmy O’Brien, Nick Wert and Jack DiRocco opened gaping holes for Matt Dooley, Austin Andersen and Kyle Hyzy. After a brilliant run by Hyzy to the one, Andersen punched in for the touchdown. DiRocco made the PAT to put the Warriors up 7-6.

With Cole Stevenson and Dominick Caratazzolo anchoring the middle of the line, the Warriors stopped the Wreckers cold.

Pinned deep in their own territory after an Andersen punt inside the 10, Westport punted to Ryan Healey who fielded the ball on the Wrecker 40 and returned all the way to the 16.  On the next play Hyzy weaved in and out of would-be tacklers for a 16 yard score to increase the lead to 13-6 at halftime. Another big punt return, this time by Hyzy, put Wilton in great position at the Westport 19. Three consecutive carries by Andersen resulted in the Warriors’ third score and a 19-6 advantage.

Westport struck back through the air to close the gap to 19-12 early in the fourth quarter.

On third and five at the Warrior 35, Hyzy broke a long run all the way to the Westport 15. On the next play Jimmy O’Brien bulled his way to the three and two plays later Healey’s quarterback sneak made it 26-12.

Westport threatened late in the game, but Maden Herve ended the threat by picking off a pass at the goal line.

After a slow start plagued by turnovers, the Wilton Sixth Grade White football team jumped out to a three touchdown lead for the second consecutive week before cruising to a 28-12 victory over Fairfield Black on Saturday, Sept. 13 at Tetreau-Davis Field in Fairfield.

Wilton’s offensive line of Will Jarvie, Henry Sell, Matt Gulbin, Davis Cote, Neil Satsangi, Jack Carroll and Ryan Siegel took control from the outset. On the game’s second play, Sean Sullivan took a direct snap from Cote and raced all the way to the Fairfield 32.  The drive would end in a fumble as would the next, but the Warrior defensive line of Everett Andersen, Gulbin, Luke O’Neill, Connor Healey, Sell and Jimmy McKiernan were also dominant, completely shutting Fairfield down in the first half.

Early in the second quarter, the offense got untracked as Blake Pagano-Walley, Trevor Martines and Sullivan ate up chunks of yardage on the ground during a seven play, 68 yard drive culminating in Martines’ eight yard touchdown run.  Ryan van Heyst then added the first of his four kicks for the extra point to put the Warriors up for good, 7-0.

Later, Sullivan scored on a seven yard run to make the score 14-0 at the half.

The Warrior defense stuffed Fairfield on 4th and 5 at their 35 early in the second half and on the next play, with the help of a great stiff arm, Pagano-Walley rumbled for a score and a 21-0 lead.

Fairfield narrowed the gap to 21-6 with a 66 yard return of a Wilton fumble.

The Warriors struck back immediately, this time through the air. Andersen’s 19-yard completion to Chase Autore put the ball at the Fairfield one. Two plays later, Andersen rolled left and hit Pagano-Walley in the end zone for Wilton’s fourth touchdown and a 28-6 lead.

Fairfield managed to score on the last play of the game to make the final score 28-12.

Do you have a sports wrap-up for YOUR Wilton team? Email it to editor@goodmorningwilton.com and we’ll be sure to include it!