Each week GOOD Morning Wilton> will run news of weekend results and scores submitted by Wilton Youth sports teams. Please send all stories and updates, along with a photo to editor@goodmorningwilton.com by noon on Monday of each week. Stories received after the deadline may not be included. Results write-ups will be grouped by sport and published in the order they are received.

Wilton 10U Travel (2-0) broke a 4-4 tie with Denny Dustin’s walk-off walk with the bases loaded in the bottom of the 6th inning. Charlie Heffernan scored the winning run after singling to reach base.

The Warriors’ bats came alive in the 4th inning with a single by Greg Bocchino, who was promptly driven in on a double to right center by Peter Braid. Casey Meyer kept the inning alive with a single, followed by a 2RBI double by Mario Coppola.

Gavin Toohill, Braid, and Anthony Palumbo combined for nine strikeouts over six innings. Their battery-mates were Keegan Kazan and Ethan Driscoll, who split the catching role in an outstanding defensive effort. Dustin, Braid, Meyer, Coppola, Heffernan and Bocchino all had hits on the day for the Warriors.  Gavin Levenherz scored the team’s first run with a steal of home on a past ball and Jeff Fox supported the cause with solid at bats.

Jeffrey Fox had 10 strikeouts and let up just one hit over three-plus innings of relief for Sanford Orthodontics. Teammates Kevin Berghaus, Owen Roos and Julius Tangorra each walked and scored a run.

For the Crimson Tide, Conor Lane, Brad Mallory, and Zachary Feldman held Sanford Orthodontics hitless throughout the game and combined for 10 strikeouts. Trailing 2-4 in the final inning and with two outs, Mallory cracked a single to knock in two runs to force the tie. Feldman had a pair of singles and scored two runs. Benny Coleman had a walk, single and scored two runs. 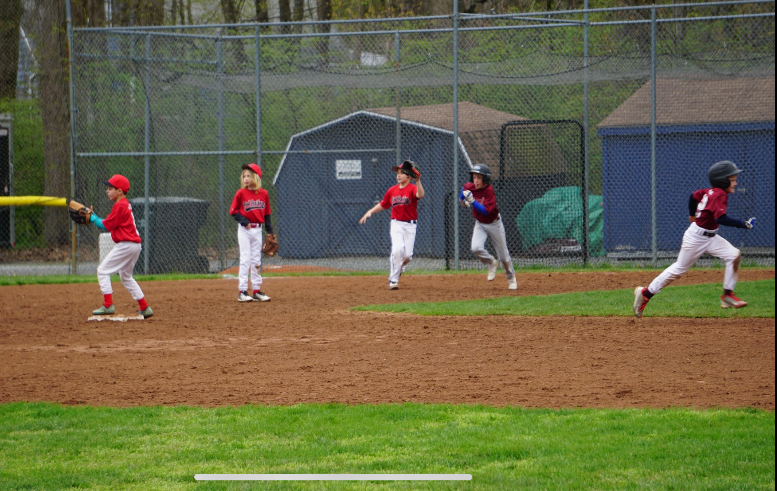 Jeffrey Fox protected Wilton’s goal in the second half. Wilton held the lead with brilliant defensive and offensive plays from Holden Reading, Ryan Vermeulen, Rocco Tripodi and Adrian Joseph. Two goals by Bridgeport closed out the first and second half, but superb plays by the Wilton’s team secured the Warrior win.

On Sunday, the team defeated Stamford 7-3.  Thanks to excellent goal tending by Fox and Filip, plus aggressive defense by Mason Cilento, Vermeulen, Reading and Joseph, Wilton was able to hold Stamford to three goals and secure the victory.  On the offense side of the ball, Mulfinger dominated play with three goals, including one amazing corner kick. Dhamoon knocked in two goals of his own and Hans Greene and Tripodi each scored to put the game out of reach.