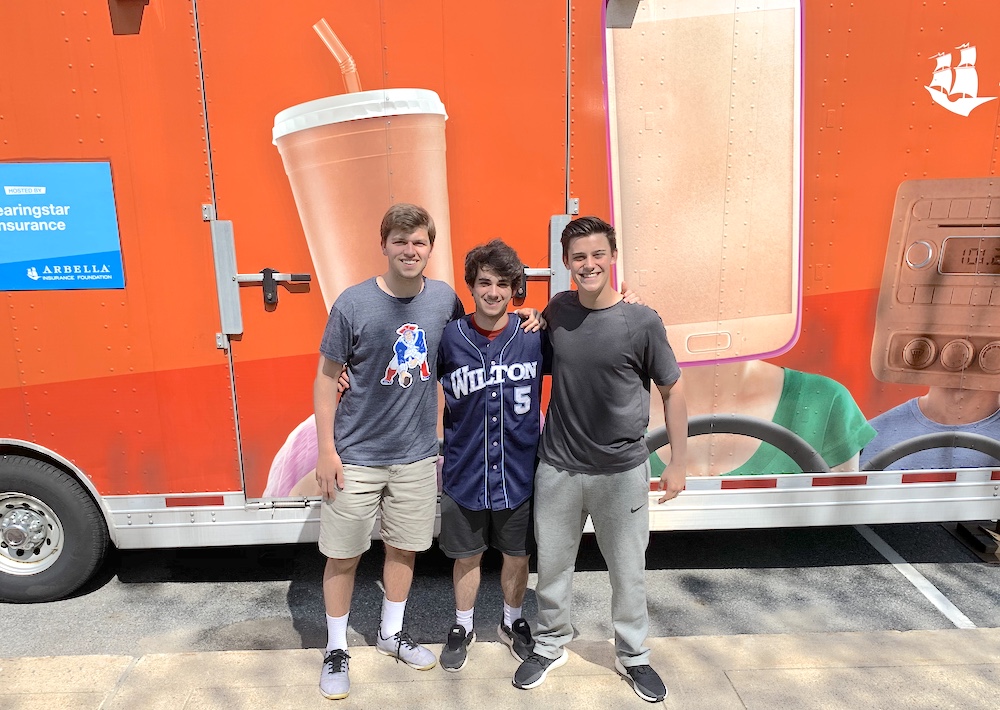 This past week, Wilton High School students have been getting into a lot of car accidents, caused by distracted driving.

Thankfully it’s while behind the wheel of a driving simulator, designed to show them the dangers of driving while distracted by phones, friends and passengers, eating and drinking, loud music and more.

The effort was spearheaded by a student club called WISE (Wilton I-Drive Safely Everytime). The club was started a few years ago by three siblings–Lindsay, Annika and Nick Sheehan–following Lindsay’s own experience of narrowing escaping death in an accident caused by distracted driving in 2010.

“Lindsay, was in a rollover car accident after accepting a ride home from a reckless driver. The car flipped over and Lindsay had to crawl out of a back window and had a huge gash in her back from all the broken glass. Lindsay, my sister Annika, and I founded the club to bring awareness to the dangers of reckless and distracted driving and turn her negative experience into a positive one,” says Nick, a WHS junior who, as the youngest of the three Sheehan siblings, now leads WISE as president.

Nick learned about Distractology, a mobile classroom with two state-of-the-art, high-tech driving simulators. Getting behind the simulator wheel gives new drivers a real-life look at the potentially dangerous effects of distracted driving. He contacted Bearingstar Insurance Agency, which brought the Distractology classroom to Wilton through the Arabella Insurance Foundation.

“I wanted a hands-on experience about distracted and reckless driving in order to make a lasting impression on Wilton High School students,” he says.

Through his work with WISE, Nick learned some important stats:

There are other alarming stats specific to teens and distraction. According to the AAA Foundation for Traffic Safety. The study shows that drivers talking on a cellphone are up to four times as likely to crash while those who text are up to eight times as likely to be involved in a crash. The Journal of Adolescent Health has also found 38% of teenagers across the country text while driving–in Connecticut, the number of teens who text while behind the week is at 30%.

Most alarming of all, according to the CDC, nine people are killed every hour and more than 1,000 are injured as a result of distracted drivers.

The Distractology simulations are based on real-world examples, and give students the experience of feeling what it’s like to drive while texting, posting to social media sites like Facebook and Snapchat, and changing the radio all while navigating residential and highway conditions.

Teens spend about 45 minutes training on the simulators. After this, participants are asked to log on to an online interactive video to finish their training, reinforcing what they learned in the trailer. Students who complete the eLearning Challenge are entered to win a $500 scholarship.

The stats Arabella gives show that after completing the Distractology training, students are: