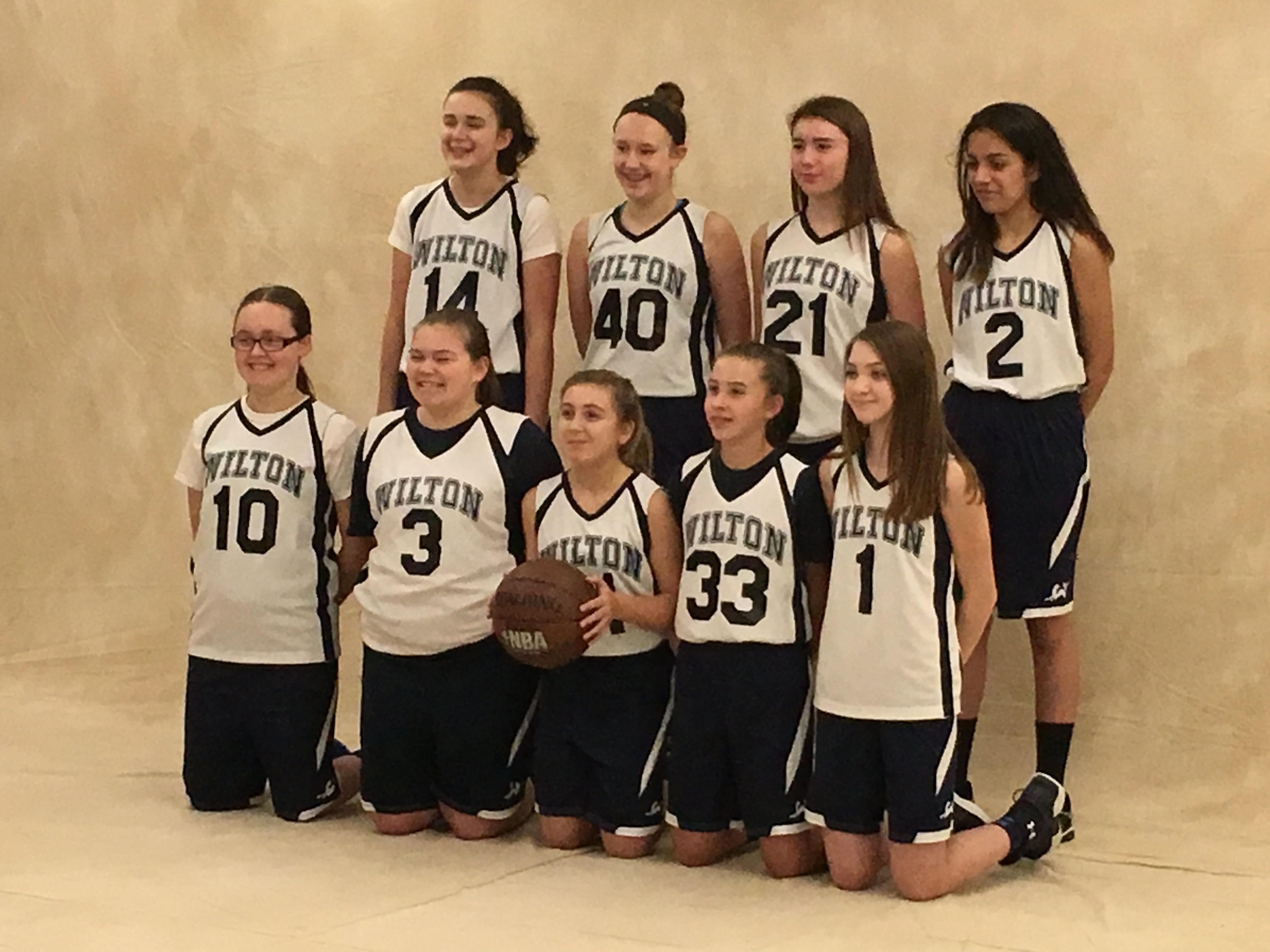 In their second, hard-fought win of the season, the Wilton 7th/8th Grade Girls Basketball team (pictured above) came from behind to defeat Bethel on Saturday, Jan. 5.

The Wilton Girls 5th/6th Grade Basketball team had a tough weekend. The team experienced two losses on Saturday, Jan. 5, but leveraged those two games to brush off the post holiday rust to play a nail-biter of a game against the 6th grade New Canaan Red team. The Wilton girls led the game going into the fourth quarter, but New Canaan came back in the fourth to take the lead on a three pointer and followed that up with another bucket to win the game 16-21.

This game should be viewed as a confidence builder for the team, as they head into another two games this weekend, after playing some of their best defense of the year.

The Wilton 6th grade boys came off winter break with two tough, local rivals on their schedule. First was top seeded Westport. Wilton came out of the gates with stifling defense from Jack Schwartz, Luke Perna and Luke Ginsburg to hold Westport to only 7 points in the first period. Liam McKiernan (10 pts) started the game with a 3-pointer and got a lot of scoring help from Ryan Luchetta (7 pts) and Liam Murphy (5 pts). After being tied 18-18 in the third period, Westport pulled away on a 12-point run, which ended up being too large of a deficient for Wilton to dig out of, handing the Warriors a 32-48 loss.

On Sunday Wilton traveled up Rte. 7 to play Ridgefield. The Warriors started slowly and found themselves down 9-17 at the end of the first period. However, they got their legs under them in the second period by dominating the boards and tremendous defense from Cole Siegel (4 pts, 8 rebounds), Cael Dexter (3 rebounds), and Cole Galante (2 steals, 2 rebounds), and Schwartz’s hustle (3 pts, 5 steals). Wilton rallied to tie the game at 24-24 at halftime behind the sharp shooting of Ginsburg (9 pts) and Luchetta (9 pts). But in the third period, Ridgefield opened up a nine point lead and held on to win this tough battle 37-45.

Wilton 5th/6th Grade boys got their first win of the season, topping Greenwich Flame in a convincing fashion on Saturday, Jan. 5, 40-34. It was a day of the big men as Henry Soojian (14 pts) and Ryan Meenan (10 pts) scored 24 of Wilton’s 40 points. They were fed the ball successively by the starting guards Stefano Cross, Matthew Garcia, and Dylan Gallo as they also each pitched in with four points apiece. Mason Andrews and Liam Joy rounded out the scoring off the bench. Reserves Max Totten, Conor Toohill, Patrick Lillis, Trevien Goldman, and Jake Brokaw battled defensively and moved the ball into the post well.

The Warriors earned their second win of the season in a close battle with St. Mary’s Ridgefield, finishing 43-39. Starting guards Garcia (12pts), Cross (8 pts), and Gallo (4 points) combined for 24 points in the game. Starting big man Meenan (9pts) used his size underneath to grab several offensive boards and putbacks along with his fellow big man Soojian (4 points), who contributed in the paint as well with his size. Toohill (3 steals), Lillis, Joy, Totten, Andrews, Goldman, and Brokaw also played aggressively on both sides of the ball.

In their seventh game of the season, the Wilton Boys 7/8 defeated Newtown Gold 8B on the road by a score of 38-30. Griffin Turner started the game with a quick score and Wilton led until the fourth quarter as Newtown made a late game push. Turner had two end-to-end plays (defensive steal and rebound), scoring at the other end, with one a 3-point play. After the push by Newtown, the tie was broken by Andre Wiest making 2-of-2 critical free throws in the fourth quarter. Jackson Duncan also shot 1-of-2 free throws for a Newtown technical foul. Leading scorers were Wiest, Turner, and Michael Wall, with five other team members contributing points, including Nick Bologna, Thomas Burkhart, Duncan, Patrick Heffernan, and Tim Martin. Strong rebounding performances by Martin and Declan Brokaw, with Tucker Farrell and Luke Umphred demonstrating relentless defensive play to protect the lead throughout.

Wilton’s second game of the weekend was at home against Weston Blue 8B, which also ended in a victory, but not until a tough overtime battle that closed with a score of 40-37. The scoring leaders were Wiest, Turner, and Martin with four other team members contributing points, including Bologna, Burkhart, Duncan, and Wall. At halftime the score was tied 19-19, and again at the end of regulation at 33-33. In OT, critical free throws by Duncan and a clutch 3-pointer by Burkhart helped to get Wilton the win. Strong performances at both ends for Wiest and Bologna, who scored and had five-plus rebounds. Assists by Brokaw and Heffernan combined with tenacious defensive play from Farrell and Umphred helped achieve the hard-fought win.

A full slate of games this past weekend for the Wilton 8th Grade Boys started with a very tough Waterbury team and their vociferous coach, Dr. Victor. Waterbury came out strong, but Wilton did not back down. Ryan Preisano led the Warriors offensively with four 3-pointers and 16 points total over a hard-fought four quarters of play. Additional offense was provided by the solid play of Bailey Finn (15 pts.), Will McCormack (5 pts.) and Alexander Reyes (5 pts.). Nick Walden took down 8 boards against a much taller Waterbury squad. All of the Warriors put in big time effort, but Waterbury proved to be too tough this day, avenging their previous loss against the Warriors with a 49-62 win on their home court.

The second game of the weekend returned the 8th Grade Warriors to the friendly confines of Middlebrook’s old gym for a league game against Newtown. The Warriors came out on fire, jumping out to a 15-2 first-quarter lead. Tommy McKiernan and Spencer Liston led the way with solid defense and four 3-pointers between them to get things going. Finn, Walden and Reyes controlled the boards and added solid offense to give Wilton a 37-11 lead at half. The second half was much of the same for the Warriors. Stifling defense and unselfish play led by Mikey Byrnes, McCormack and Jefferson Mitchell kept the Warriors in command. Preisano and Tommy Walsh added several scores to beat a feisty Newtown team by a final of 60-44.

The third and final game of the weekend pitted the Warriors against a tough Mt. Vernon squad. Wilton came out strong and showed no fear against a much bigger Mt. Vernon Team. The strong offensive play of Liston, McKiernan, Finn, Preisano and Walden gave the Warriors a 15-11 first-quarter lead. Full court pressure by Mt. Vernon took its toll on the Warriors in the second quarter however and gave the Mt.Vernon squad a 36-26 halftime lead. Mt. Vernon started the third quarter just as hot and applied the full-court, man-to-man pressure. Wilton did not back down, with scrappy play from Reyes, Mitchell, Byrnes, Walsh and McCormack. The Warriors hung tough and continued to attack the basket, but it proved not enough in the end, as Mt. Vernon prevailed by a score of 43-57.

The Wilton 7th Grade boys were looking forward to their first game of 2019 against Stratford PAL. The boys came out looking a bit rusty. The first quarter was plagued with mistakes and they ended the first quarter trailing 6-12. The boys came out strong in the second quarter, with Max Jarvie and Kyle Roesser dominating the boards (7 and 10 rebounds respectively) and contributing 10 points each. Wyatt Jones and Levi Kaplan directed the offensive counter attack, Todd Woodring (6 points) and Henry Roy (5 points) contributed on offense. Jack Minnich and Will Fisher each had clutch 3-pointers. Peter Reyes and Luke DiRocco played strong defense, each grabbing multiple boards. The boys never looked back and finished the game with a win 44-31.

In their second game of the weekend, the 7th grade Warriors had another slow start on offense against a good Weston team and were down by as much as 8 points in the first half. Wilton played tough defense and did a great job getting to the free throw line and went into the half down 12-15. After giving up two 3-pointers to Weston to open the second half, the Wilton 7th grade boys went on a remarkable offensive run and tied the game with a nice inside basket by Jarvie. The boys figured out how to break Weston’s full court press, which led to an easy layup by Woodring and a 3-pointer by Jones. Big men Roesser and Reyes dominated the lanes with blocked shots and rebounds, and Kaplan helped close out the scoring with a well timed steal and layup. Roy’s aggressive play led to an active day at the line where he made 8 of 10 free throws. DiRocco, Minnich, and Fisher helped round out the offensive outburst, with Wilton scoring 39 in the second half to win the game 51-35.