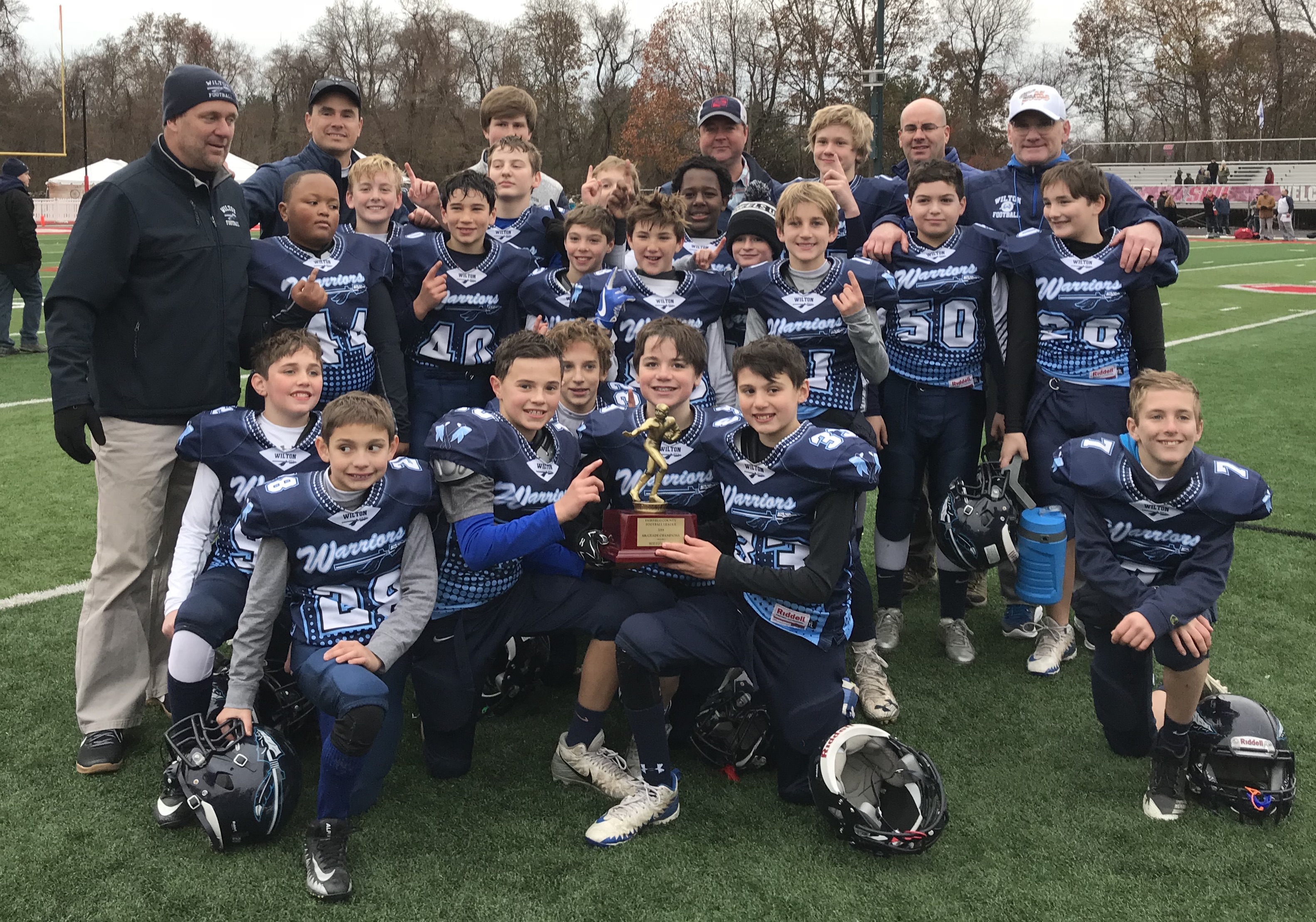 Harvest Meet Shows Off Top Talents Soaring on Vault, with One Perfect 10

For ages 8-9, Gabriella Martin was beam, bars and floor champion with her floor score being a 9.65.

For ages 14-plus, Wilton’s newest gymnast Alyssa Greenlaw was the AA champion, winning gold across all four events.

For ages 13+, Elizabeth Fahey won the AA title as she shined and took 1st on floor (9.7) and on vault (9.65). Jeni VonBartheld took home the 2nd AA trophy while impressing everyone with 2nd on bars, 3rd on beam and floor, and 4th on vault.  Ella Mancuso took home gold on bars before getting injured during her impressive tumbling on floor. Coach Todd made the decision to scratch the rest of her competition.

For ages 10-12, Taylor Archambeau took home the 2nd AA trophy while placing 2nd on bars and beam. She performed beautifully on floor placing 3rd with a 9.6 and finished 4th (9.15) on vault. Alyssa Mariani took 2nd on beam.

For ages 14-15, coming back from a neck injury, Alyson Scheurkogel had an impressive first meet back. She wowed the judges placing 1st (9.75) on vault, 1st on bars, 5th on beam and floor, and finished 4th in the AA.

For ages 12-13, Mia Karlehag swept the meet placing 1st in the AA and all four events, while scoring a very impressive 9.75 on floor.

For ages 16+, Emma Daugherty took home the 1st AA trophy, 1st on floor (9.3), bars, and beam while taking home silver on vault. Kate Ginsburg placed 1st on vault and bars and took 2nd on beam, floor, and the AA.

The Wilton 6th grade team took the field on Sunday against New Canaan Black with a lot on the line–an undefeated record over two seasons (20-0 since September 2017) and a chance to repeat as FCFL champions. The excellent coaching staff of Ed Keller, Jeff Siegel, Tom Dexter, Paul Snyder, Dan Ginsburg, Kevin Luchetta and Ryan Siegel had prepared the boys all week to treat this like any other game – one play at a time. But, the boys (and the dads) knew it was bigger than that.

The Warriors got off to a fast start driving the ball down the field behind their terrific offensive line of Maja Driscoll, Cole Galante, Jack Huntley, Ryan Luchetta, Liam McKiernan, Ryan Meenan, Jack Santosky, Cole Siegel, Henry Soojian, Jaxon Thomas and CJ Young. On their first drive, tough runs by Jack Schwartz, Cael Dexter and Luke Ginsburg moved the ball down the field, and a nifty catch by Ray Ferranti on a pass from Liam Snyder got the Warriors in scoring position. Snyder punched it in on a quarterback sneak for the first–and only–touchdown of the game. Ginsburg connected on the extra point, putting the Warriors up 7-0.

It was a defensive battle from that point forward. Wilton’s defense kept the Rams in check by keeping the ball in front of them and making great tackles. Will Cristini ended a Rams drive late in the second quarter with a critical interception sending the teams to the locker room with Wilton leading 7-0.  Wilton’s offense continued to move the ball well in the second half, with great running from Ferranti, Cristini, Luke Perna, and Ryan Stocker, and a terrific pass from Dexter to Cristini, but the Rams defense was well prepared and continued to frustrate the Warriors offense, keeping them out of the end zone.  The offense was missing the shifty running of Charlie Keller who was sidelined with an injury. It was only fitting that the defense would need to step up and deliver the win for Wilton.

The defense has been lights out all year, allowing only seven touchdowns all season and recording six shutouts. The Warrior D came up big in the second half with the whole team getting in on tackles, swarming to the ball. Dexter picked off the Rams quarterback late in the game, stopping the Rams’ momentum. And, on the last play of the game, Siegel and Snyder combined for a sack to seal the victory.

The Wilton 6th graders finished the season 11-0 and won their 3rd FCFL Championship in four years. This is a special group of boys and coaches who love the game–congratulations to all of you on another fantastic season! Only 38 weeks until the start of football practice 2019.

The 6th Grade champions are pictured in the article’s main image.

The 2007 Girls Blue team capped off a tremendous season with a dramatic 1-0 win over Fairfield in the divisional championship game on Sunday. Playing on a muddy Norwalk pitch, Wilton Blue displayed their trademark grit and determination by pressuring Fairfield repeatedly until Kate Lane slotted home the championship winning goal in the last few minute of play.

Coach Terrell Whitting had the girls ready to play after dispatching ERU in the semi-finals on Saturday. Abbey Byrnes, Quincey Burke, Mary Sylvester and Alyssa Karim consistently stymied the Fairfield attack, and Giuliana Scaturchio was rock solid in net as usual to earn the clean sheet.

Despite missing stalwarts Lia Lombardi and Olivia Koziol, midfielders Caroline Cronin, Ellie Drew, Julia Munrow and Sophia Partola worked relentlessly to shut down the Fairfield attack and provide opportunities for the Wilton forwards. Paige Leung,  Lane and Emma-Hayes Setterlund were a dynamic group at forward whose hard work and terrific play all game finally paid off in the last few minutes.

Congrats to 2007 Wilton Blue on a championship season!

The 8th Grade boys basketball team kicked off its season on Saturday, Nov. 17 against Ridgefield. Wilton came out strong, with great passing and shooting by Bailey Finn (25 points) and Tommy McKiernan (10 pts). Spencer Liston (8 pts) battled to the hoop multiple times to keep Wilton in the game, but by half-time the Warriors were down by 10 points.

In the second half Wilton turned up the heat, with Nicholas Walden crushing the boards for 11 rebounds and a total of 9 points. William McCormack swished two 3-pointers and sunk a foul shot for 7 points. Solid defense by Mikey Byrnes, Ryan Preisano, Alexander Reyes and Tommy Walsh kept the Tigers at bay and Wilton walked out with a 59-52 victory.

Combined, the teams outscored their opponents by a 69-6 margin, and included contributions on both sides of the ball from every player on the team.

The Wilton 5th grade boys lacrosse team went undefeated (3-0) to win the title at the 2018 Gobbler Games at SUNY Purchase.  This team came together just for this tournament and played great, moving the ball and pressuring the opposition in each game. Alan Osta scored the game winner against New Canaan as time was winding down, on a beautiful shot to the top corner. Grant Stein played great long stick defense all day, knocking down numerous passes and helping to clear the ball repeatedly. Robbie Baronowski played well at midfield and attack, making good feeds and decisions with the ball.  Brendan Morris buried a thrilling OT winner against Westport on a pretty feed from Connor Buchichio, and both of those guys were a huge part of the team’s success in all three games. Connor McAndrews had an outstanding day–and a great Westport game–intercepting passes and turning them into goals and keeping the offense on the attack. Trevor Galligan was outstanding between the pipes making some eye-popping saves in the close games and keeping Wilton’s momentum going. Andrew Mims excelled at attack, scoring the game winner against Weston. Cooper Buchicio was a workhorse all day, playing excellent defense and midfield, hounding the ground balls. Luke Agosta drew a critical penalty against Weston, and played well all day.