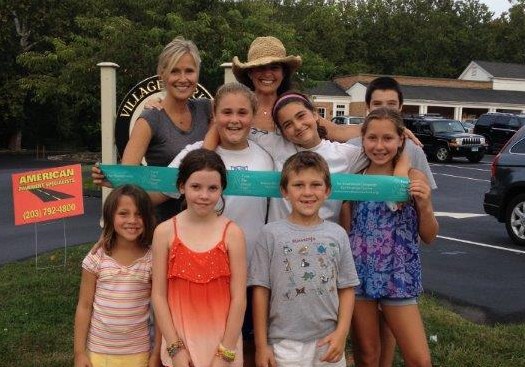 While many people are familiar with the purple ribbon campaign to shed light on domestic violence in October, and the pink ribbon that symbolizes breast cancer awareness, Wilton residents will be seeing a new shade around town this month:  teal. It’s hoped that this bright color will bring attention to the insidious disease of ovarian cancer – one out of 71 women in the U.S. will be diagnosed with it, without ever noticing a single symptom.

This past Saturday of Labor Day weekend, Wilton resident Ashley Gouveia organized a ribbon-tying brigade in Town Center. She, along with her children, friends, and their children, took part in the national “Turn The Town Teal” campaign to promote awareness of ovarian cancer and its silent symptoms.

The group divided into teams covering north, south, east and west sides of Old Ridgefield Road from Ridgefield Road to the last flag-festooned “Welcome to Wilton” post. One hour and nearly 100 bows later, the group had already fielded questions from pedestrians and drivers asking, “What’s the ribbon for?” In true Wilton spirit, residents honked, waved, yelled, “Thank you!” without necessarily knowing what the effort was for.

Gouveia hopes to raise significant awareness of ovarian cancer, as her connection with the disease is a close one:  her mother, Judy, passed away nearly nine years ago after a late-stage diagnosis (Stage IIIB). There is no early detection test for this type of cancer, and symptoms are frequently written off as digestive problems, or just part of “middle age,” which is what Gail MacNeil, the founder of “Turn The Towns Teal,” was told by her doctor.

MacNeil, who lived in Chatham, NJ, created the campaign in 2007 after her 1997 diagnosis.  She was frustrated by the lack of awareness of the disease–specifically the (usually subtle) symptoms to look for. Had she known that her bloating, lack of appetite, and other signs could be attributed to cancer, she would have insisted on being seen by a gynecological oncologist.

While Gouviea was on vacation weeks ago, she happened to receive an email about the Turn the Towns Teal program while simultaneously Googling “teal ribbons.” She’d always supported the Ovarian Cancer Research Fund (OCRF),  but the optimal timing made her say, “This is the year!” and signed up right there online through her phone. Jane MacNeil, Gail’s sister-in-law, was in touch immediately. Gouveia contacted the Town of Wilton for permission to tie ribbons on town property and got the (teal) green light. She emailed some friends, told them when and where to meet, and added a new color to the overcast day.

Having her children participate with the campaign was very important to Gouveia. While her mother was able to meet her now 11-year-old granddaughter, Isabel, she sadly did not get to meet grandson Jude, who turns seven this fall.

“My mother would want me–and my daughter in the future–to be vigilant with regular check-ups, pelvic ultrasounds, and to listen to our bodies. In addition, she would most likely urge me to do the genetic testing, which I will be undergoing in the next couple of months. Unfortunately, my mother never had the genetic testing so I’ll never know if her ovarian cancer was gene related or a random case.” Gouveia’s aunt, her mother’s sister, has had the gene testing done and does not carry either BRCA 1 or 2.

The key message Gouveia would like to get across is that this may be a silent disease, but treatment is possible, and the prognosis is not always fatal.  KNOW the symptoms.  LISTEN to your body.  SUPPORT research and a cure.  There are promising new approaches happening in labs and hospitals today. And of course, early detection is key.

Gouveia said, “If we can spread the word to save just one person and give them a longer life with their loved ones, then we’ve done good!”

For more information on ovarian cancer, its symptoms, potential risk factors, and how to support the effort to raise awareness, visit www.turnthetownsteal.org.