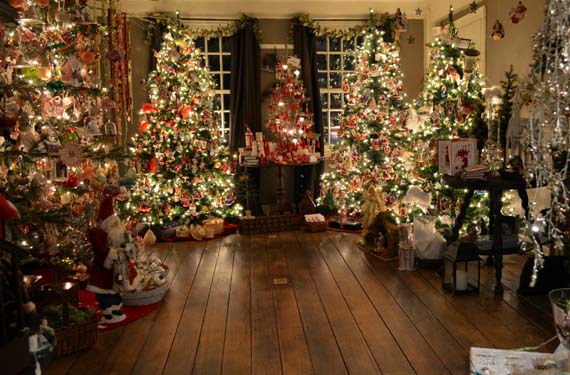 Christmas, as everyone knows, has December pretty much locked up. Some people occasionally mark a tongue-in-cheek Christmas in July. But what about the other ten months of the year?

The magical store located at Lambert Corner, 150 Danbury Road, is filled with collectible and enchanting Christmas ornaments and decorations, plus other distinctive gifts and house wares.

The store was opened in 1990 by owner Jennifer and Gary Bean in the red barn on a corner of the historic property at the intersection of Rt. 7 and Rt. 33. But in 2012, they relocated into the more visible Lambert House, which is the town’s oldest building and appears on the Town Seal.

“We do have people who come in all the time and say, ‘I never knew you were here!’ There’s more visibility now that we’re in this building out of the barn, and people have said, ‘I’ve lived here for such a long time, and I’ve never been in here!’” explained Laraine Pascarella, who was working in the store one day last week.

The layout of rooms in the antique house lend a charm as customers wend their way from room to room, each one glittering with an abundance of Christmas ornaments hanging on decorated trees. There’s something for everyone.

Some favorites include the Department 56 line of holiday miniature decorations (villages and landscapes); ornaments for every personality, hobby and interest—with themes and objects as varied as ‘Support the Police’ badge ornaments, hanging pink flamingoes and seashells,  miniature hair blow dryer, cigars and wine bottles. You name it, it’s a very safe bet the Christmas Barn has it.

“In summer, ornaments are big wedding gifts. We have wedding gift sets, but people always come in and assemble their own, personalized sets. It’s become very popular,” Pascarella said.

The prices run from under $10 to a very exclusive, several hundred-dollar range for collectible, one-of-a-kind items, like those made by Patricia Breen. “These ornaments are very high end and very limited. She only deals with about a dozen stores in the country. She’s an American artist who lives and works in Poland. She does exclusives for every store. When we moved to the Lambert House, she designed a ‘Welcome to Lambert House’ ornament for us.”

The store does sell items that aren’t for Christmas as well.

“We kept the ‘Christmas’ name from when we were in the barn up the hill, but we’re branching out into year-round gifts and other seasonal things.”

Right now they’re coming up into Halloween and are showcasing Halloween lighting, lanterns and decorations in the front of the store. “Halloween has just mushroomed in popularity, a lot of people are now decorating for it,” Pascarella said. Popular items for Halloween and fall themed decor right now are the Hot Skwash pumpkins, made out of velvet and real pumpkin stems.

The Christmas Barn also carries a wide selection of candles, gifts and jewelry lines, including Troll Beads, which Pascarella described as, “like the Pandora add-a-bead, mix-and-match pieces, but they’re the originals from Denmark.” They also carry April Cornell tabletop linens, and a food section, including spices, cookbooks and other culinary items, like Hammonds’ Candies and herb mixes from Halladay’s in Vermont. They also have pet gifts, including dog biscuits and dog collars.

The Christmas Bar offers mail order via their website. “We especially do a lot of mail order on Patricia Breen ornaments, there are collectors all over the country. But everything else too, all our major lines are on there,” Pascarella said.

The store is open Tuesday through Saturday, 10 a.m. to 5 p.m., and Sundays from 11 a.m. to 5 p.m.; the Christmas Barn will open seven days a week beginning in October, through December.

There is a Troll Beads Trunk Show on Sept. 6-8. Contact the store for more information.