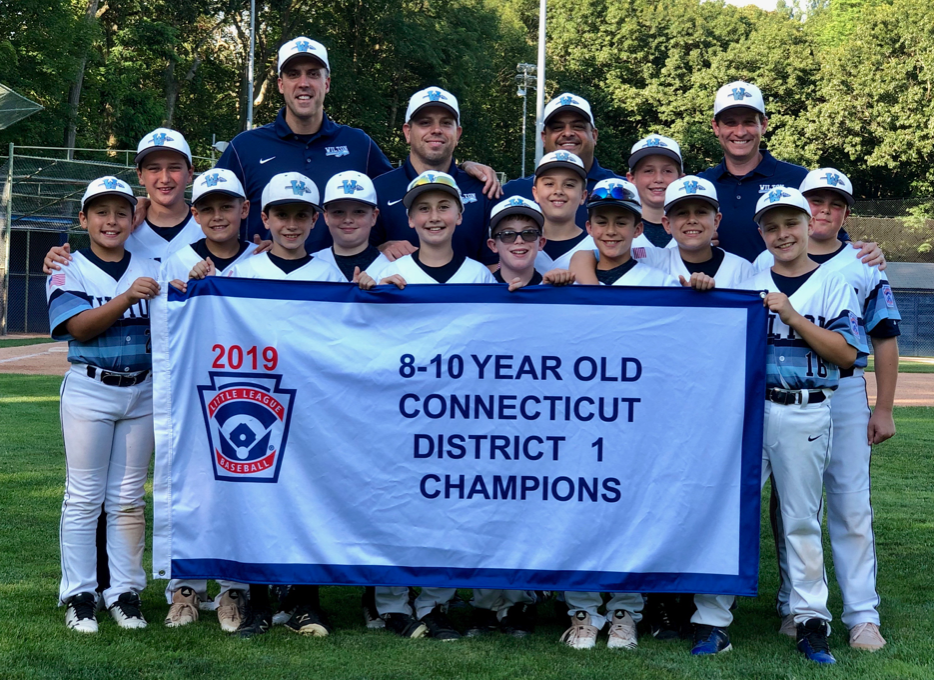 Wilton Little League 10U Baseball lifted its championship banner on Friday night, July 12. For the first time since 2013, Wilton won the CT Little League District One Championship by defeating Darien’s 10U All Star team, 5-4.  The team showed its resilience in coming back to win the championship after a tough 10-0 loss to Darien Wednesday and being down 3-0 to start Friday night’s game.

Wilton began its comeback effort beginning in the 4th inning of Friday night’s game with the score 0-3 in favor of Darien. Keegan Kazan, who walked and advanced to second on a passed ball, was able to reach third base by tagging up on a deep fly ball to left field by Ethan Driscoll and score on a single by Greg Bocchino to bring the score to 1-3.

Colton Smith, who had six strikeouts and only one walk over four-and-one-third innings, held Darien to just the three runs to keep the game within reach for the Warriors. The offense came alive in the 5th inning on the back of a single by Charlie Cretella, double by Smith and a game tying two-RBI single by Denny Dustin.

In the 6th inning Bocchino got things started with a double to left, after which Peter Braid reached on an error. Wilton capitalized on the opportunity with a single by Gavin Toohill to drive in a run and a sacrifice fly by Cretella to make the score 5-3.

The final inning was not without drama, however, as closer Anthony Palumbo faced the heart of the order with runners at 2nd and 3rd after a single and two Wilton errors. Palumbo kept the runners there, however, sealing the win with a strikeout, pop-out to the pitcher and ground out to second base to end it.

Wilton ended the tournament with a 5-2 record, outscoring opponents 54 to 23. The offensive effort was lead by Smith, Cretella, Casey Meyer and Mario Coppola, who combined for 37 hits in the tournament. On the mound Smith, Cretella, Palumbo and Jeff Fox combined for 62 strikeouts over 42 innings. A solid defensive effort was led by Dustin, Gavin Levenherz, Meyer, Bocchino, Fox and Driscoll in the outfield, Smith, Cretella, Coppola, Toohill and Braid in the infield and Kazan and Palumbo behind the plate. It was a true team effort.

Wilton now moves on to the Connecticut Sectionals Tournament, which begins Tuesday, July 16 against Max Sinoway (North Haven), the winner of the District Four championship.  The game will be played at 7 p.m. in North Branford (260 Forest Road, Northford, CT).