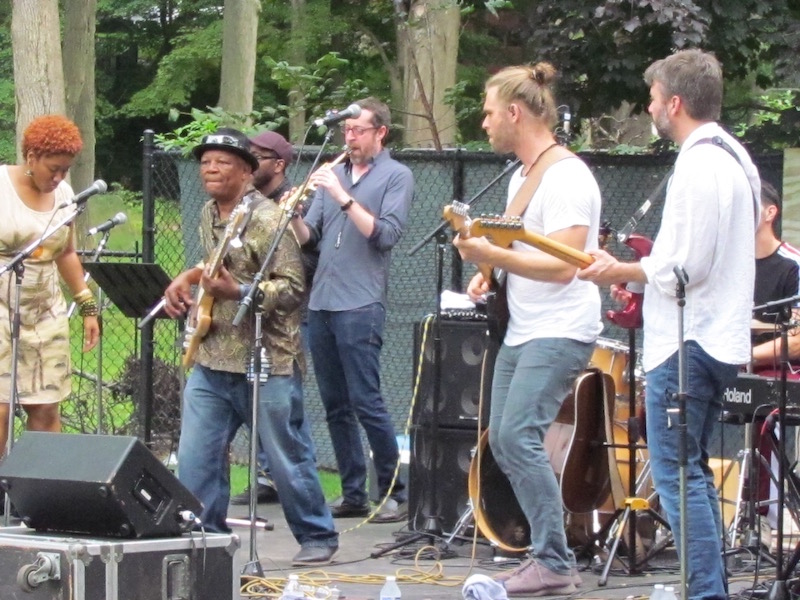 Wilton is a musical town, where musicians and artists come together to do good. Whether it’s Wilton Rocks for Food, the many musicians who have been created through the Wilton Public Schools, Acoustic Wilton, or all of the several musical organizations, you’re never far away from the way music harmonizes with the town.

That same chemistry will be on display once again this Sunday, Sept. 8 when the 2nd Annual Family Day Free Concert takes place in Merwin Meadows, to benefit Connecticut Friends of the Performing Arts. Organizer Ray Bryant says the concert is meant to be both a very fun community event as well as the primary way the group has to lay the groundwork to keep music a central focus in Wilton for years to come.

Bryant and fellow Wilton resident Andy DiLoreto founded CT Friends of the Performing Arts to promote outdoor performing arts in Wilton as well as the development of a performing arts facility at Schenck’s Island. The group also aims to award scholarships to graduating high school students pursuing performing arts in college, as well as provide a forum for other Wilton non-profits to create awareness, drive membership, participation and support. They also see music as an economic development driver–they believe making Wilton a draw to performing artists will enhance the town’s image and reputation as a fun place to live and visit, and will ultimately help promote local merchants and stimulate business.

After last year’s debut Family Day Concert in Merwin Meadows, they were very encouraged by the response.

“People definitely enjoyed it. We had so much fun last year–we actually have a plan for a minimum of a third and fourth year. Our goal is not just Family Day–Family Day is to keep the morale high for when some plan of action comes to Schenck’s Island. Ultimately, they’re going to need some contributions from the town’s people, that says, ‘Hey, this is what we find to be important.'”

He says clearly there’s a desire for something that that in town. Bryant points to Acoustic Wilton, Wilton Rocks, the Summer Concerts at Schenck’s Island and Merwin Meadows, and the Wilton Library‘s Summer Concert Series, in addition to last year’s huge turnout at the first Family Day Concert as proof.

“Just keep that in the back of your head that while you’re having all this fun out there listening to the great music, imagine what a nice lawn and a more permanent fixture of an amphitheater would look like,” he says.

However that is represented when the Schenck’s Island/Merwin Meadows plan evolves, Bryant says CT Friends of the Performing Arts wants music to play a role in making Wilton a vibrant place that is sustainable for business and residents alike.

“We want whatever the community says at Schenck’s Island, our goal is to make that happen. But our main goal is to get foot traffic and to get more people to come to Wilton. That’s really what our goal is–it’s not to build the concert series, it’s not to build the band shell, it’s not to revive a park. It’s all of that as an advertising and marketing effort to make the town a more desirable place, and I think that’s happening,” he says. “We want to bring people from outside of Wilton to come experience our town–we have a lot to offer and we want to continue to promote that.”

For Sunday’s concert, People are encouraged to bring chairs and blankets, and picnic on the lawn at Merwin Meadows. So who will be performing at this year’s Family Day?

“Doors” open at 4 p.m., and at 4:30 p.m. Matt Greene, a Wilton resident who is a local guitarist and singer (Acoustic Wilton, Bob’s Your Uncle and more), takes the stage; he’ll be followed by Paul Green Rock Academy; then last year’s headliner, Bakithi Kumalo, the bassist for Paul Simon, will join Jay and Ray. Finally, headlining this year’s show will be Pete Francis, founding member of Dispatch.

“Dispatch for the last 20-plus years has been really popular in the northeast and actually nationally and internationally. Pete lives in Greenwich and he’s going to come with his band. They’ll definitely play a lot of your Dispatch favorites, his catalog, some new songs–he’s such a humble guy but his stage presence is incredible. I think that the people of Wilton will appreciate it for sure. They’ll get something really that’s special that night,” Bryant says.

While the concert is free, donations to support CT Friends of the Performing Arts will be welcome and accepted. And it all goes to support keeping music and the arts as part of Wilton’s bedrock.

“Everywhere I go, I find out just how deep the arts are here,” says Bryant. “We have Weir Farm–that’s a whole entire artistic community that exists up there that is deeper than I think anyone even realizes. That is a gem in our community and the nation. We have the library and all the wonderful performances that the Brubeck Room handles and that is amazing. The Wilton Singers. Wilton Rocks. When you move to a community and you find out they have all of that? You feel special. We really have this special little gem of a town.”

Letter: In This, There Is Nothing to Divide Us