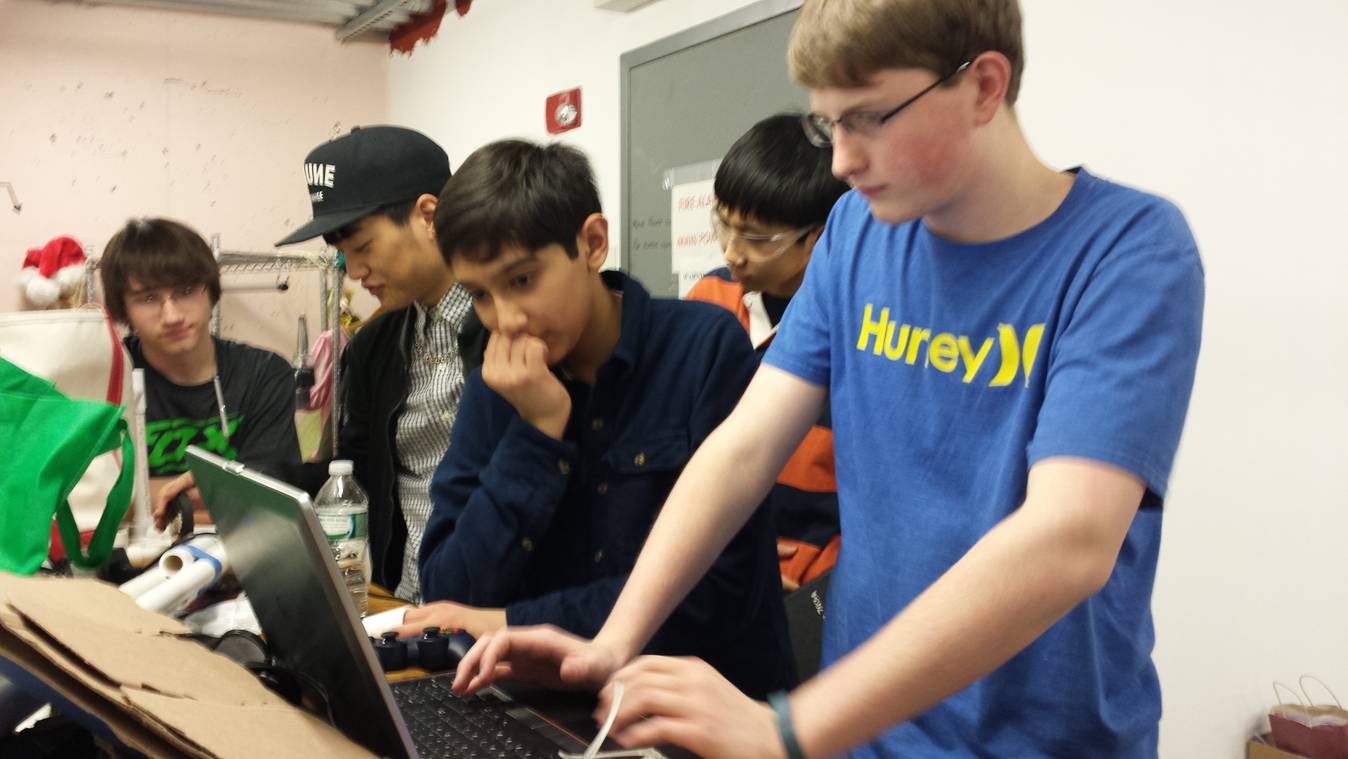 Below the quiet of the Wilton Library, in the basement among the stacks of archived newspapers, a group of teenagers is up to something.

Sporting protective eye gear, gathered around a computer screen, intently discussing strategies, they are the members of Singularity Technology, Wilton Library Association’s first robotics team. Growing from concept to reality in less than eight months, the team is made up of 10 high school students and two middle schoolers, and is overseen by a mix of library staff members and volunteer mentors.

This Saturday, Feb. 1, the team will head to Windsor, Connecticut for a final qualifying meet before the state championship, which takes place March 8 at Greens Farms Academy in Westport. The group already qualified for states at a competition on Jan. 18, so Saturday’s match will serve as an important practice round before the big show. All competitions are run by FIRST Tech Challenge – a national organization headquartered in New Hampshire which creates and manages programs and competitions throughout the country.

Susan Lauricella, head of Teen Services for the Library, says she and her husband, Paul, first started talking about ideas for a STEM-centered program (Science, Technology, Engineering, Math) over a year ago. The two also appealed to their friend and neighbor, Keith Andreson, a retired engineer.

“At first we were thinking about buying kits so the kids could build robots,” says Andreson. “Then we started digging into more formal organizations.”

Lauricella says the group discovered FIRST Tech, then met the Westport Wreckers team, which was already competing with the organization.

“We had the Wreckers come in and do a demonstration for us, and we offered applications for our program to kids in grades 7 through 12,” she says. “We had no idea what the interest level would be, but ended up getting a huge response!”

By the end of June 2013, the Singularity Technology team was formed under the guidance of Susan and Paul Lauricella, Andreson, Board of Trustees member Malcolm Whyte, and Library technical expert Thomas Kozak. The group held organizational meetings over the summer, and in September awaited the announcement of the 2013-2014 FIRST Tech Challenge. Each year’s challenge is revealed via video on the FTC website (usfirst.org). Parameters for the capabilities of each robot, as well as the tasks it must handle in competition and an overview of the scoring system are outlined in the video. From there, it’s go time.

When asked what a robotics team meeting is like, mentor Whyte chooses instead to point out what it is not like.

“There is no fighting or arguing, just an overall spirit of ‘Let’s try!’” he says. “They are so intensely focused on what they are doing and put in a lot of hard work.”

Whyte, a retired architect, says he was immediately impressed by the students who stepped up to form the team.

“These kids really didn’t know each other well, other than that most of them attend the same school,” he says. “When the younger kids jumped in, I was amazed at what they already knew.”

“It’s an opportunity to faciltate the overall creative process,” he says. “We lead them in guided brainstorming, question them, challenge them, and help with hands-on training.”

Wilton High School freshman Nickia Muraskin says the team offers something for everyone.

“We have to learn problem solving and work together to complete every task,” she says. “We also get experience in a whole range of fields, so whatever someone is interested in, there is a space for them on the team.”

Beyond designing and building their robot, team members are also responsible for raising their own funds, developing a sales pitch for potential donors, and dressing for success while going door to door soliciting support from local businesses. Additional responsibilities include keeping a detailed journal of all project activities, maintaining a website for the team, and sharpening their communications skills for competition.

“When they are at a meet, they have to present to a panel of judges on their project as well as on other topics such as whether they are involved in helping their community,” says Lauricella. “We don’t go in with them; they have to do the presentation on their own, which pushes them out of their comfort zone a bit.”

“Team members also have to be able to communicate well with other teams at a competition,” adds Andreson. “They need to be able to discuss strategy with their allies, divvying up roles and tasks before a match begins.”

One of the main themes of FIRST Tech Challenge competitions is Gracious Professionalism, something Singularity Technology takes to heart.

“It means if someone has a problem, you go help them,” says Whyte. “It also means your ally in one round may be your competition in the next and vice versa.”

Along with their allies and competitors, Singularity Technology will take to the robotics field this Saturday, and again in March to round out the 2013-2014 FIRST Tech Challenge. To cheer them on, visit their website at singularitytechnology.wordpress.com. Win or lose, there is no doubt their rookie year will already go in the record books as a tremendous success.