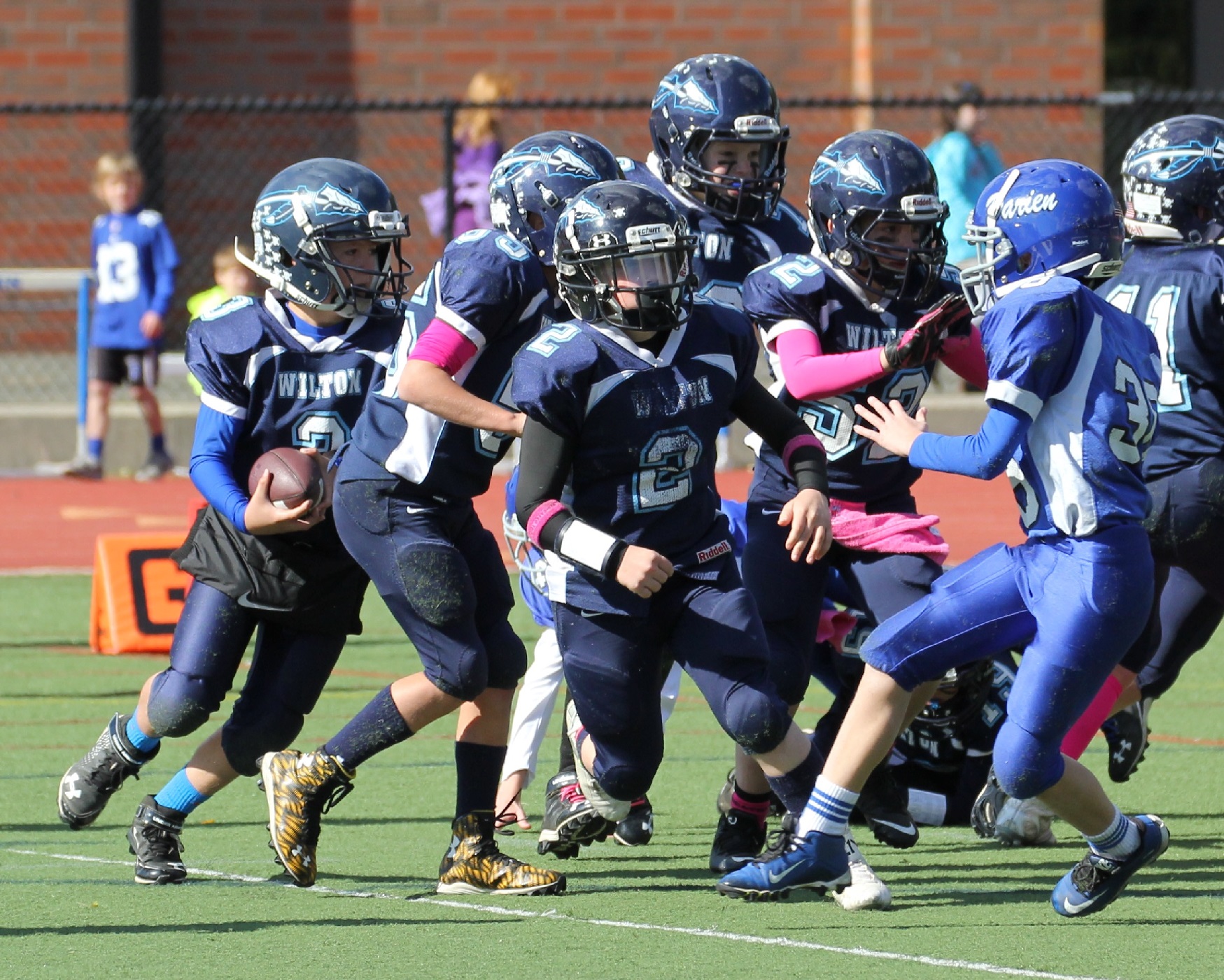 Each week, GOOD Morning Wilton will run news of weekend sports results from Wilton Youth Teams. Please send all stories and updates to editor@goodmorningwilton.com by noon on Monday of each week.

On a cold Sunday morning, Oct. 18 in Darien, Wilton 5-Blue pulled out another gritty victory against a tough Darien team. Although Wilton controlled the ball and time of possession for the first half, an untimely turnover and one bad play on defense put Wilton in a 6-0 deficit at the half.

For the remainder of the game, Wilton’s defense stuffed Darien, holding them to negative yardage. Big tackles from the Wilton defensive line of Nicholas Walden, Jack Montanero, Michael Colavecchio, Merrick Snyder and a fumble recovery by Lorcan Garcia helped to keep Darien’s offense off of the field. Wilton’s offense did the rest of the work churning first downs and eating up the clock. (Image above)

Wilton came out of halftime strong. On their first drive, great downfield blocking by Ray Ferranti and Jake Burns created space for Connor Burns to jet down the sideline for a 50-yard touchdown. After a Westport 3-and-out, Wilton was at it again with great runs by Jack Schwartz and Charlie Keller. Luke Perna finished off the drive with a 22-yd. touchdown run to make it 12-6 Wilton.

Westport answered with a quick TD, and Cole Siegel made the defensive play of the day stuffing the 2-point attempt. Wilton’s defense continued to hold the Wreckers with great tackling by Cael Dexter, Liam Snyder, Ryan Luchetta, Liam Murphy, Connor Boland, Cole Galante and Liam McKiernan to preserve the tie.

After a convincing 22-0 win against Westport, Wilton 7-White was back on the field for a matchup against Ridgefield Sunday night, Oct. 18. This pivotal matchup of the 3-0-2 Wilton team versus a 5-1 Ridgefield team would go a long way towards setting seedings for the upcoming FCFL postseason.

Wilton’s defense came into the game surrendering a league-low 21 points in five games, including four shutouts. They knew they would be facing their toughest test – a strong running Ridgefield team that had pounded recent opponents on their way to winning four straight games.

Wilton won the coin flip and quickly moved the ball down the field on runs by Sean Sullivan, Trevor Martines and John Stanley. The drive stalled in Ridgefield territory and Wilton was forced to punt. Ridgefield took possession and on the third play of the drive their running back scampered 52 yds. for the touchdown. Ridgefield tacked on the 2-point extra point to take an early 8-0 lead.

The balance of the first half saw more of the same⎯Wilton driving the ball down the field only to see their sustained drives falter in Ridgefield territory. The strong Wilton defense, which had carried the team all year, struggled against Ridgefield, giving up runs of 99 yds. and 45 yds. to put Wilton in a 24-0 deficit. Wilton was able to get on the board before halftime on a 53-yd. run by Stanley. The holes were opened up by strong blocking from Matt Gulbin, Michael Coffey and Brendan Quinn. Wilton had clawed back to 24-6 at the half.

Wilton was unable to capitalize on a Martines fumble recovery early in the third quarter. Their drive stalled at the Ridgefield 45 yd. line. Ridgefield once again moved the ball down the field, taking a 31-6 lead. A very tough day for the Wilton defense that had only surrendered 21 points on the season.

Wilton mounted a comeback in the fourth quarter, scoring on a 30-yd. run by Stanley and 4-yd. run by Martines. This brought Wilton to within 11 points. Wilton was unable to bring the score any closer and the game ended 31-20.

A tough day for the Warriors but a good reality check as they edge closer to post season. Wilton will look to finish the regular season strong in a game against Darien on Saturday, Oct. 24.