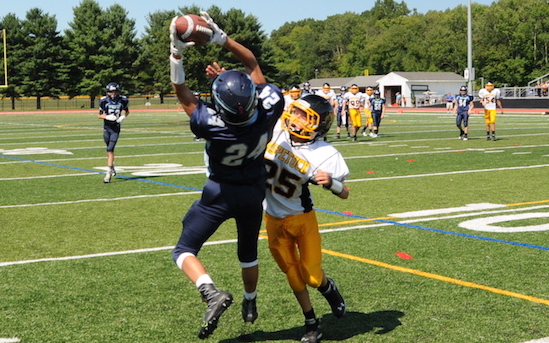 Each week, GOOD Morning Wilton will run news of weekend results and scores from Wilton youth sports teams. Please send all stories and updates, along with a photo, to editor@goodmorningwilton.com by noon on Monday of each week.

Wilton G11 Blue came out strong at the John Jay Labor Day Tournament on Saturday, Sept. 3. The team had an impressive start with a 4-1 win over Ridgefield with Addison Pattilo, Kaitlyn Zizzadoro, Riley Fitzgerald and Molly Kaeyer all scoring, in addition to several solid shots on goal by Isabel Barbieri, Alexa Furst and Cosette Lepore.

With a stacked defense and midfield of Morgan Breaker, Fiona Gibbons, Kaitlyn Sullivan, Jane Hughes, Furst, Kaeyer, and Lepore, the team displayed their skills and determination to keep the ball moving up the field and out of their opponents scoring range in the second game against Harrison. Fitzgerald and Zizzadoro had shots on goal but Brooke Aleksiejczyk scored Wilton’s only goal in the second game to tie.

Aleksiejczyk, Patillo and Hughes equally displayed fierce goal-keeping skills throughout the tourney, making several great saves. Wilton met rival New Canaan in the finals.Barbieri sunk Wilton’s only goal while the team worked hard to keep the ball moving. Aleksiejczyk, in goal, made several impressive saves but in the end the team lost to New Canaan 2-1.

On Saturday, the third grade Warriors won their season’s first game against the Westport Wreckers. An early touchdown by the Wreckers put the Warriors on the defensive. Soon back with the ball, Kieran Wiseman, Charlie Calabrese and Boden Davi led the Warriors in a steady progression towards the opposing end-zone, capping it off with a hand-off by Calabrese to Wiseman for the Warrior’s first touchdown.

In the second quarter there was great blocking by Phillip Mouracade and Quint Furman allowing a run by Craig O’Neill to the Wrecker’s one-yard line. Unfortunately, the Warriors couldn’t score and the ball was turned over on downs. Fantastic defense by Mason Behar, Will Byrnes, Joshua Meltzer, and William McDonald resulted in the Warriors quickly gaining back possession. The combo of Calabrese passing to Davi resulted in the Warrior’s second touchdown.

The Warrior’s defensive line – Grant Stein, Lincoln Jones, Dylan Gallo, Curtis Jackson and William McDonald again swung into action, and possession quickly came back to Wilton. With just 11 seconds to go in the half, Theo Satrazemis caught the Warrior’s third touchdown, at the buzzer, to make the score Wilton 20 – Westport 8.

The second half saw solid defense by the Warriors. Allowing only one early touchdown to Westport, making the score Wilton 20 – Westport 14. The Warriors controlled possession in the second half. Jake Padilla had a great block on 4th-and-4 to spring Calabrese for a first down. Blake Ongley had another great block for a first down. A late fumble by the Warriors was quickly recovered by Max Totten to retain possession.

After turning over the ball on downs, the Wilton defensive line of Stein, Gallo, Hunter Lishnoff, Marco Chila and Emma van Heyst stopped the Wreckers and caused a fumble. The game ended with Stein firing up the middle, breaking up a handoff. Wilton won 20-14.

#14 Craig O’Neill takes the hand off from #8 Charlie Calabrese with blocking by #40 Max Totten and #95 Joshua Meltzer.

In the first football game played on Wilton’s new turf, Wilton’s 6th grade Blue team started its 2016 season with a solid performance. The game started with Darien scoring on its first two series with amazing runs by Darien’s super quick running back. After settling down and making several adjustments on defense Wilton was able to shut down Darien’s offense for the remainder of the game.

Defensive end Nicholas Walden, linebackers Griffin Turner and Xander Petridies, and cornerbacks Charlie Guglielmo and Quinn Stengrim had excellent games. On the defensive line, first year player Bobby DiPalma was able to control the line of scrimmage while Jamie Cristini was a beast with multiple sacks. The defense also scored a touchdown on a 30-yard strip by Andrew Kress.

Wilton’s offense, although a little inconsistent, was able to score three touchdowns through long runs by Spencer Liston, Guglielmo and Christopher Capone, and power running by Stengrim, Petrides and Andrew Acosta-Rua.

Defensive lineman Andrew Kress (#84) scores a touchdown after a strip and 30-yard run.

The 6th Grade Wilton White Warriors won their opening game of the season on the road with an impressive win over the Aspetuck Wildcats, 22-6. Wilton scored first on their opening drive with a 38-yard touchdown run by halfback Ryan Preisano, upping Wilton 6-0. The impressive running of fullback Wil Sullivan, who had a huge 34-yard run, set up the touchdown.

The tough Warrior defense, led by defensive tackle Jackson Duncan, sacked the Aspetuck quarterback in the end zone for a two-point safety making the score 8-0 in Wilton’s favor. Tommy McKiernan had 68 yards rushing on the day. In the second quarter, quarterback George Hahn threw a 25-yard pass caught by wide receiver Zach Kravitz  who was brought down at the 3-yard line. Wilton pounded the ball in on a 3-yard run by Sullivan, and Michael Wall kicked the first of his two points after touchdown, making the score 15-0, Wilton.

Defensively, the line pressured the Aspetuck backfield all day, led by guards Lorcan Garcia, Jackson Kreter and Christian Stella, who all had big tackles. At safety, Wall was key in stopping the passing attack. Defensive end Matthew Dooley, and outside linebackers McKiernan and McCormack made some big tackles stopping any Aspetuck drive. The Warrior defense was outstanding on third downs led by Andrei Schroeder. The defense gave up a late, fourth-quarter touchdown but stopped the extra point attempt. Wilton won convincingly 22-6.

The Warriors host Darien Blue next Saturday night at 6:30 p.m. at Fujitani field.

Wilton White’s 8th grade football squad opened the 2016 season at Aspetuck on Sunday afternoon. Despite some early season jitters that led to a Wilton fumble on its first possession and an Aspetuck touchdown on the ensuing drive, the Warriors looked solid from top to bottom.

After falling behind 8-0, the Wilton offense buckled down and sustained an impressive drive almost entirely on the ground, with running back Sean Sullivan doing the lion’s share of the work behind offensive guards Michael Coffey and Evan Kauh, offensive tackles Matt Gulbin and Andre Long, and center Michael Burton. Sullivan finished the drive on a nice 5-yard run up the middle for a touchdown.

That drive seemed to wake up the Warriors as the defense really stiffened, led back tackles for loss by Gulbin and Jimmy McKiernan. McKiernan then caught a pass for a key first down on offense as Wilton’s air attack began in earnest.  Quarterback John Stanley then found Trevor Martines for a 25-yard strike down the sideline that set up a nice touchdown run by Mack Kepner.

Wilton’s defense took over for good right before the half with Ryan Witty and Max Greenberg making key stops on the line and Martines intercepting the ball with less than a minute in the half. On offense, the Stanley-to-Martines connection struck gold for a 35-yard bomb good for another touchdown. Kicker Ryan vanHeyst made all three extra points in the half to make the score 24-8.

The second half opened with more of the same, with Wilton’s defense forcing Aspetuck’s offense into a 3-and-out after Coffey had a tackle for loss and joined Witty for another stop at the line of scrimmage. On offense, Stanley found receiver Mattias Onnerud for a nice completion to get the drive going. Then Kepner found daylight again, barreling over defenders for an impressive 33-yard touchdown run.

With the score 30-8, Wilton relied on strong defense line play the rest of the way by Long, Kauh, Quinn O’Connor and EJ Fasano, who forced a fumble, along with Will Rath patrolling the secondary. Nolan Graham and vanHeyst took over the running back duties and ground out the remaining time in the game. Darien Blue is up next for the Wilton White Warriors.

Coming up with big plays when they needed them, eighth grade Wilton Blue squeaked by Darien White 21-18 on opening day of the 2016 FCFL football season on Saturday at Darien High School.

Taking the ball first and operating against a Warrior defense missing four key players (Wooder Thoby, Robert Rios, Matt Goldstein and Bradley Barker), Darien embarked on a sustained drive grinding out yards against the Wilton defense. With first down at the Warrior 12-yard line, the defense stiffened with tackles by Kiel Polito for no gain and Jack Carroll for a loss of three, forcing Darien to throw. A furious pass rush by Ryan MacDougall and excellent coverage by Max Mannino caused Darien’s fourth down pass to fall incomplete ending a sixteen play drive that consumed the entire first quarter, giving the Wilton offense the ball at the 15.

After two rushes for short yardage, Everett Andersen‘s quick out pass to MacDougall was good for 22 yards to the Darien 40. Rolling left on the next play Andersen hit a streaking McDougall in stride for a 30-yard gain. Two bruising runs by Jermaine Vincent and a diving reception by Nick Fahey took the Warriors to the Blue Wave 12. Two plays later, behind the great blocking of Kyle Jordan, Cristian Theoharides, Trey Dexter, Ryan Rogg, Carroll and Brian Cipri, Vincent dove in from the one-yard line. MacDougall’s kick put the Warriors up 7-0

Darien again went on a long drive but time expired in the half with Wilton up 7-0.

Wasting no time MacDougall took a handoff from Andersen on a jet sweep on the first play of the second-half and rumbled 70 yards for a touchdown to put the Warriors up 14-0. But Darien struck back twice quickly to narrow the score to 14-12 early in the fourth quarter.

On the first play of Wilton’s next possession, Vincent busted through a gaping hole created by Cipri, Dexter and Carroll and raced 46 yards to the Darien 24, but the drive stalled leaving the Warriors with fourth and long at the 24. Needing a big play, Wilton perfectly executed a screen pass with Andersen hitting Vincent for a 24-yard touchdown and an insurmountable 21-12 lead.

Darien scored a late touchdown to make the final 21-18.

Wilton 7 White lost a heartbreaker at New Canaan on Saturday, 14-7. The Warriors fell behind 6-0 late in the 2nd quarter but stopped NC on the extra point when Eli Ackerman, Wade Steffens and William Ryan stonewalled the NC QB at the goal line.

The second half was a battle of defenses as Wilton’s defense held firm behind linebackers Joe deGrasse, Masterson and Silva, and excellent end play by Luce. Tyler Hough, Ryan Farrar, Charlie Fischer, Brennan MacGregor, Ben Pond, Pellicano and O’Neill anchored the defensive line. The Wilton offense was stymied in the second half, despite solid blocking by receivers Jackson Luther and Chris Calderone. Wilton gave up their 7-6 lead with 1:32 to go in the game, on a 4th-and-9, when the NC QB evaded pressure and took it in for the score and ensuing extra point.