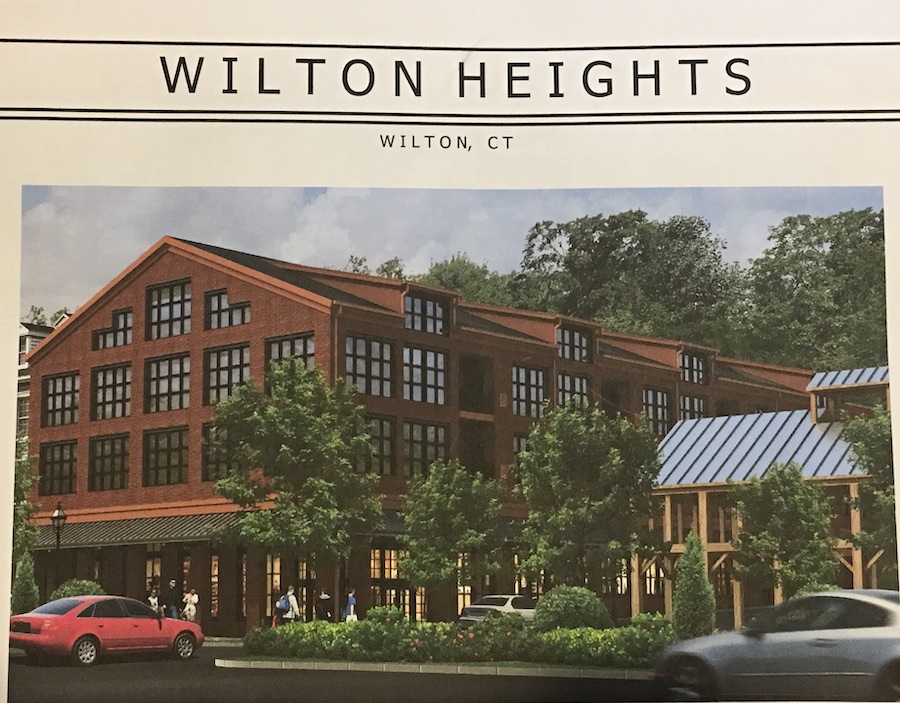 The 12th time is the charm? It may not have actually taken 12 meetings for the developer of the Wilton Heights development to get the Village District Design Consultant Committee‘s nod of approval on a design for the proposed project–but it certainly felt that long. But finally, after multiple meetings to review several iterations of architectural plans, the committee that’s sometimes called the architectural review board told developer Paxton Kinol that the most recent, new designs they saw for the first time Monday evening Jan. 8 were plans they could recommend to the Planning and Zoning Commission.

“You’re Free!” VDDC chair Rob Sanders said to Kinol, his architect Timothy Gooding, landscape architect Kate Throckmorton, and lawyer J. Casey Healy, after the committee said they’d be sending an affirmative report to P&Z. The Monday evening meeting was a special meeting convened so that the report could be completed in time for P&Z’s meeting next Monday, Jan. 14, when the public hearing on the Wilton Heights application is required to close.

The new drawings reflected a new alternative design the VDDC considered for the first time at their Dec. 13 meeting, when Kinol described changes he’d make if given more freedom over the design. This latest round of drawings incorporated more of a mill-style architecture, mixed with updated, shaker-style details in sections of the proposed buildings.

Going into Monday’s meeting Kinol knew he’d be likely to find more enthusiasm and support from the VDDC, which had responded more positively than ever before at the concept of integrating more mill-style architecture. The meeting still lasted longer than two hours, and the six-member VDDC made multiple suggestions and requirements that will need to be incorporated to get their final sign-off. What’s pictured here are the drawings Kinol brought with him to Monday’s meeting; there still will be slight, additional modifications (to some window sizes and placement, as well as changes to balcony patterns railings, and more) to the designs that will eventually be presented to P&Z in one week.

GOOD Morning Wilton has asked Kinol for a reaction following the meeting and will update this story with any comment we receive.