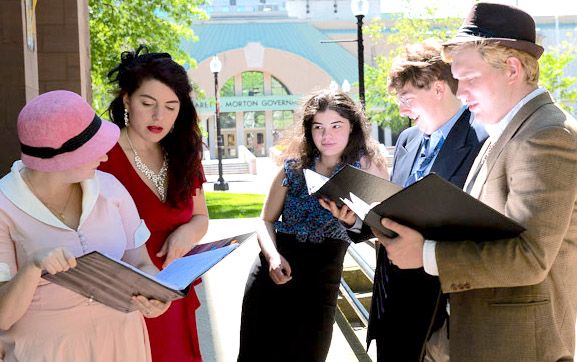 When A Deadly Game of Chess debuts at the Fairfield Theatre Company on Sunday, June 30, it will be a dream come true for 20-year-old Wilton resident Ilissa Davison. The play is an original, written by Davison (under her professional name Melody Rose) and staged with the help of students from various area high schools and colleges. All proceeds will go to the local non-profit organization, Circle of Friends, a social and language skills inclusion program that provides valuable support to students with special needs and disabilities.

The world of theater is nothing new for Davison. She has been involved in it since she was only 4-years-old, acting in over 30 different shows over the past 15 years at the award-winning Crystal Theatre Performing Arts Center in Norwalk. As a capstone to her time there, she was part of the original cast of Hungarian Nights, which toured in Budapest in August 2017.

Davison had long envisioned pursuing acting, however in her freshman year at Wilton High School she realized her true calling was writing the stories behind these productions. Davison is passionate about playwriting.

“I like creating stories. I like being able to broaden people’s horizons. A big part of my story is everything always starts out with a thesis or a message or a question that I want to convey because I tend to ask questions. I tend not to provide that many answers because I want people to think about things,” she explains.

She graduated from WHS in 2017 and is now a part-time student at New York University studying screenwriting, while also working various jobs, and of course working to bring her first original show to life. 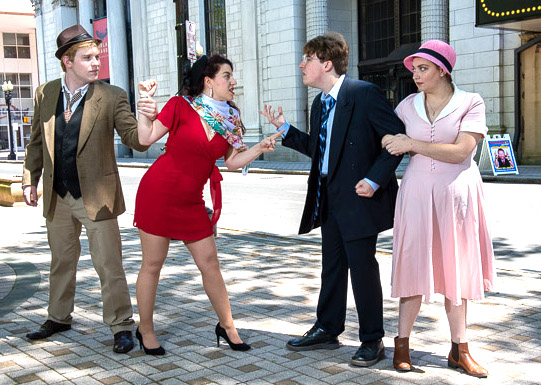 Set in London in 1938, A Deadly Game of Chess follows the relationship between two main characters:  the clever Anton Lehrer (Richard Eyler ) and his best friend, the cunning and street-smart Robyn Shawna Senscia (Michelle Mason). Anton has found a home in London after years on the run, but when Robyn returns from an extended stay in New York, she discovers that Anton’s life is a facade. The unearthed secrets about Anton’s secret life launch the two manipulative personalities into a deadly mind game in which their friends become their pawns.

“The main theme is exploring what it means for something to be true or factual. With our own biases, can we really empathize with others when we only see the world with our own eyes? The overarching theme of the show is that truth is a weapon, so we must know when to use it because a lot of times people assume that truth is good and ignorance is bad, but that is not always the case,” Davison explains.

She began developing A Deadly Game of Chess while still a teenager, as an adaption of the Ellis Island Trilogy by Crystal Theatre’s Cheryl E. Kemeny. Davison took a five-year journey of writing and scoring four different generations of the play to get it where it is today.

Given her understanding for how costly it can be to put on a production, Davison saved money from waitressing and babysitting to make her dreams a reality and bring the play to the stage for the public to see and enjoy. “I’ve worked 60 hour weeks and I’ve worked 7 days a week for almost the past year now. I am not getting any outside funding or donations. I have completely financed it myself,” she reveals.

Davison hopes that this special production is thought provoking and enables the audience to engage in introspection. “I am very careful to try and incorporate both diversity in culture and thought in my show because I want people to be able to see themselves in these characters. I think writing is so powerful because it creates empathy,” Davison emphasizes when explaining what draws her to playwriting.

Empathy is an important quality to the playwright, especially when it comes to her involvement with Circle of Friends. The organization serves children, teens, and young adults with disabilities by providing a variety of inclusive social experiences such as weekly play dates and home visits to foster friendships with non-disabled peers.

Davison’s involvement in the organization began during her time in high school. After graduation, she continued volunteering for the program, meeting with two different special needs participants each week.

“This organization provides people with special needs a social support system outside of their families or their aides at school. I think everyone deserves to have a friend who loves and cares about them,” says Davison, adding how transformative these social interactions, which quickly developed into friendships, were for both herself and the people she’s paired with. To Davison, it only felt suitable for the proceeds of the production to benefit this organization that she has devoted much of her time to and has greatly impacted her life.

A Deadly Game of Chess will premiere at the Fairfield Theatre Company’s Stage One (70 Sanford St. in Fairfield) on Sunday, June 30 at 4 p.m.. Tickets are $15 or $10 for those under 21 ($75 for two tickets plus a CD and DVD of the show). All seating is General Admission, and first come, first served.