Home News Breaking News A Song in Her Head, and Wilton in Her Heart 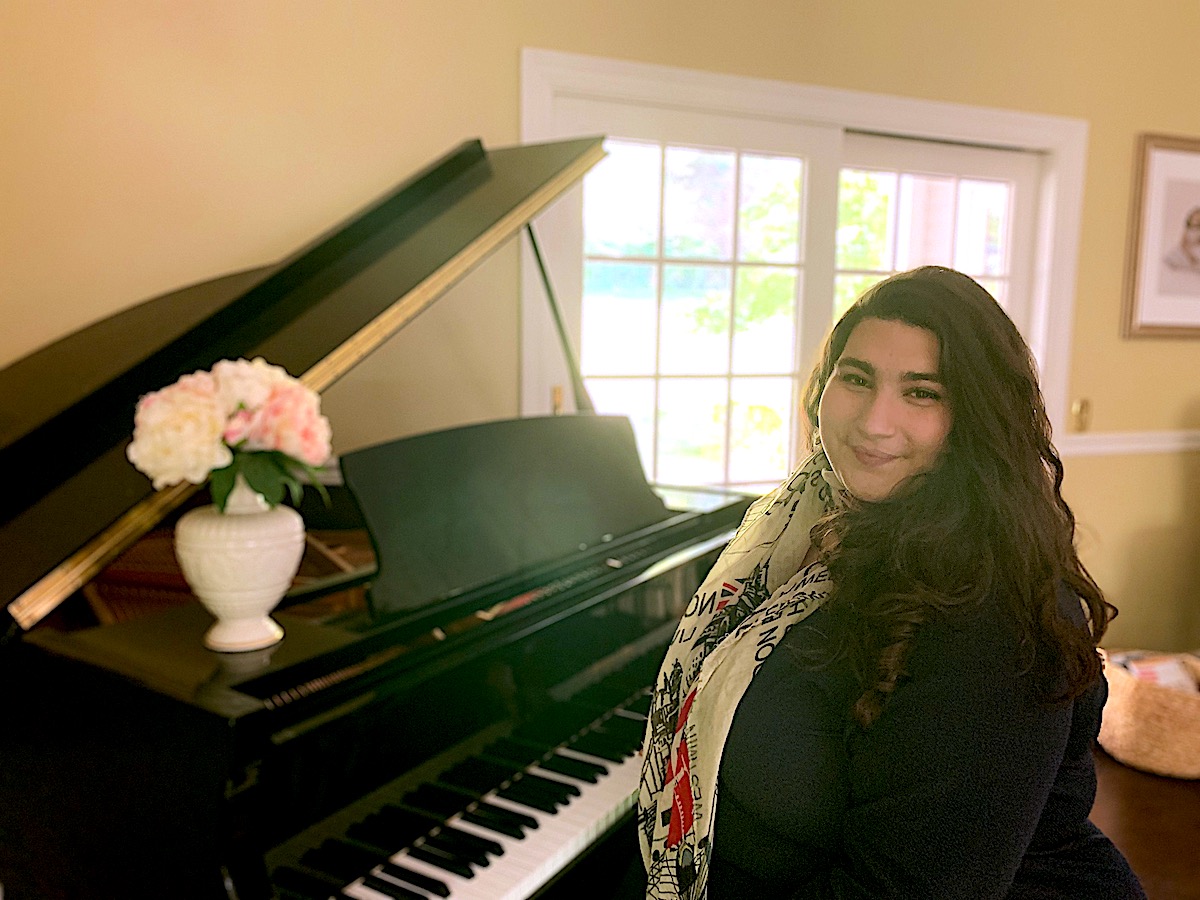 It’s 2 am. Wilton is sleeping, the busy noises of the day are mute and the town, dark. All except for a small lamp on at the Niscos’ home, where daughter Rebecca, a life long Wilton resident and recent graduate of Catholic University of America, furiously scribbles on her staff paper, jotting down the latest musical composition running through her brain, often staying up all night if an idea catches her before she drifts off.

But Nisco’s passion wasn’t something she found in another city far away; instead, it was cultivated, inspired, and enriched through every experience she had growing up in Wilton. “I like to say that my parents always helped me foster that passion from a young age,” Nisco says, “but my teachers have helped me find my own voice and support me in any way they can.”

Family, history, and Wilton are inseparable from the beauty of her pieces: Rebecca weaves her childhood, her emotions, and her curiosity into each trip to the piano.

“One of the first pieces I remember writing was called ‘Reminisces of the Heart. I was like 10,” she recalls. The piece was inspired by a picture of her family placed right next to the piano, and quickly ushered in a whole new age of musical dedication.

“It gave me such comfort, composing, so I wanted to give that to other people. I remember if I had friends who were down or family members who need a lift or friends who were sick, I would write them a little song.” She continues, “the people around me really inspire me,” as well as people around the world, current events, and history.

While she learned the technical, nitty gritty skills of composing in college, Nisco found opportunities to nurture her talent much earlier thanks to the encouragement of the community. Starting in middle school, Wilton Public Schools music teachers and classmates were “instrumental.” Friends joined to perform an arrangement Nisco made her freshman year for the WHS talent show, while teachers often helped find materials and encourage Nisco in rehearsals. Betsey DeGroff, the former WHS choir teacher used to let Nisco in her classes during free periods to help teach and gain more experience.

Those same teachers provided Nisco’s most impactful experience of all, during her WHS senior internship. She interned with the school’s music teachers, helping conduct class and with day to day tasks. But the most significant aspect was her final project–conducting a film score for the entire WHS symphonic orchestra.

“I had voices, I had brass instruments, percussion, and I conducted it at the [annual] Pops concert,” Nisco recalls. “I had all my teachers help me–Mr. Gaule, Mr. Rhodes, Mr. Meade–all of them there, my parents were there, and hundreds of students performed this … even [other] adults were so supportive.”

The event was in many ways a turning point for Nisco. Initially, she had applied to CUA as a music education major, which she picked for “job security,” but being given that opportunity to conduct made her realize that her passion could not be avoided or swept to the side. “That experience at the high school, seeing the outcome of that, really made me realize I want to do this for the rest of my life.”

She decided to go for it. “I changed majors my third day.”

She dove in, starting just a few weeks into her freshman year at CUA. Inspired by her grandfather’s military service, and eager to conduct, Nisco crafted a piece honoring soldiers for chamber choir, recruited 17 people to perform it, and record it, all before Veterans Day. Nisco recounts this timeline nonchalantly, despite the tremendous time and energy it took.

For her, music has always been about connecting with other people. “When we compose… we are completely opening ourselves up. When I compose I am pulling out my experience of my own emotions into my music. And to have that open up for someone else is a vulnerable experience… but when that happens, people connect to you.”

At college Nisco grew this desire to reach other people, and decided to do something big. “I knew since I wanted to do storytelling through music, I had to take advantage of CUA’s large theater scene,” Nisco remarks, “I was like, I’m going to write a musical.” Passionate about history, Nisco found herself remembering a fourth grade reading assignment about a woman who dressed as a man to fight in the civil war. Though she couldn’t remember the book’s name, she remembered that core plot–that over 400 women dressed up as men to fight–and knew this piece of fact was her untold story to liberate.

It’s a theme that resonates for her, particularly  on her chosen career path. Film composing, a largely male-dominated field, can easily be daunting to women–but not Nisco.

“My parents never raised me to think I couldn’t do something because I was a woman,” she states, adding they were “so supportive” of her dream and never hesitated to encourage her. “Even growing up in Wilton, people never said to me, ‘Oh, women don’t do that.'” The town helped her learn that, “Regardless of gender, if you put your mind to it, you can do anything. Having that mindset and that experience really gave me an advantage,” Nisco adds.

Wilton High School also contributed. “I think the high school really prepared me, if I have something I want to do, and do whatever I can to make that possible.”

Her most recent, and favorite, project, is a musical called “Our Man Harry.” Nisco created it with the help of playwright Lindsey Adams, from St. Louis, MO, over a series of face time calls and long distance contact. Though it’s already been performed once, Nisco is a firm believer that as a composer, nothing is every really finished, and she hopes to host another performance of the show this summer in Wilton, with old classmates and community members. Nisco encourages anyone interested to reach out, adding, “There is no greater honor than collaborating with other people”

While at home in Wilton for the summer in between academic adventures, Nisco is giving back, returning to the piano not as a student, but as an instructor.

A Facebook post three years ago asking for students quickly boomed into an annual summer job, as Nisco remarks that she’s been “blessed” to teach almost every day during her summer break, working with approximately 30 people, ranging as young as age 3 to adults. “I think being exposed to so many things when you are younger is such a gift,” Nisco adds, saying she is “grateful” for a role sharing the arts with the community.

As for the future, Nisco could not be more excited.  She knows composing is her passion, what she was put on this earth to do, and Nisco is thrilled to continue this journey to film. “I always have the desire to tell a story, and I think as long as that’s there I will always do this.”

She’ll do so knowing that though her career will bring her to many exciting, colorful places, Wilton’s role in shaping her future will always strike a chord in her heart.

Below is a link to “Tomorrow,” a piece Nisco composed at the NYU film scoring workshop and recorded by the Prague Orchestra last summer. It’s a short, two-minute cue scored to the movie “Children of Men.”