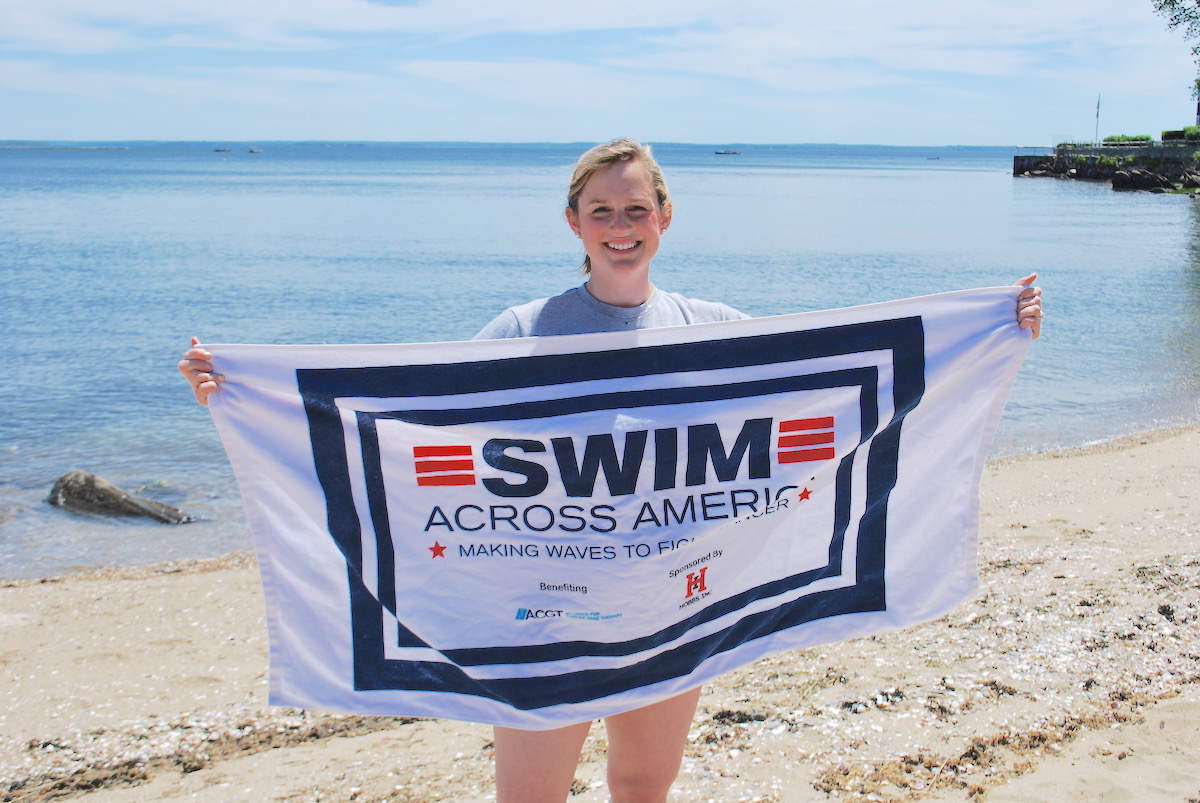 This past Saturday, June 22, more than 300 swimmers and 100 volunteers participated in the 13th annual Swim Across America Fairfield County open water swim. The swim took place in Long Island Sound, and participants had a goal of raising more than $300,000 for the beneficiary, the Alliance for Cancer Gene Therapy (ACGT), supporting breakthrough cancer gene therapy research. While the swim attracts swimmers and volunteers from throughout Fairfield County and the tri-state area, the Wilton community has always been a big supporter of this swim and its mission to raise funds to fight cancer.

Ashley Goldman, (pictured above) a Wilton, Connecticut, resident and ovarian cancer survivor, was one of those swimmers Saturday.

I swim to not only raise money for cancer research but to show my support for all cancer fighters and survivors,” Goldman said. “This October will be my ninth anniversary since being diagnosed with a rare ovarian cancer at age 23. I swim to show my gratitude for research and science; I swim for my loving husband, family and friends, and most importantly, I swim for our 18-month-old son George, who is a true miracle and the light and center of our world! Swim Across America Fairfield County gives hope to the millions of people around the world affected by cancer and I am honored to not only work for Alliance for Cancer Gene Therapy (ACGT), but to raise money and make big waves to fight cancer!” 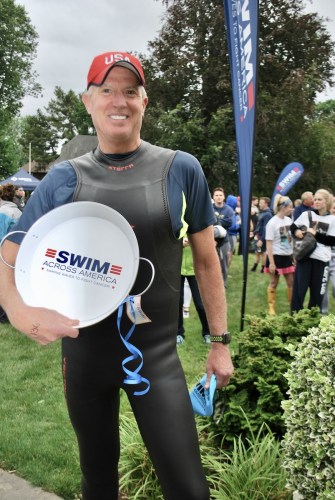 Jim O’Brien (left) of Wilton and his daughters, Kristine and Caroline, also swam, in what was their tenth year participating as a family in this annual event. Since they started they’ve raised over $250,000.

The O’Briens, joined by friends Tom Bottini and Tommy Kealy, swim on Team Kicking Cancer for Karen, Chris and Friends, for many people:  “in celebration of their friends–Ann, AnnBeth, Jenn, Joyce and Tom–who show amazing strength and admirable courage; for JP Kealy, who continues to inspire them; [for] Jim’s brother-in-law Scott, who has hurdled and beat cancer;  [and to] celebrate Jim’s wife, Karen, who is nine-plus years cancer free.”

“We have lost too many to cancer,” Jim said. “Our dear friend Charlotte, who faced cancer with the biggest smile and optimism; Mike, my childhood friend Tom’s younger brother who passed away last year after a five-year battle with his cancer; my brother Chris, mother-in-law Bernice, friend Toni and Coach Joan. And we swim in memory of Pete’s father, Eric, and Coach Kelly.”

In the past 12 years, the Swim Across America Greenwich-Stamford event has raised more than $3.8 million for crucial support of the Alliance for Cancer Gene Therapy (ACGT). One hundred percent of all Swim Across America Greenwich-Stamford funds donated to ACGT go directly to support cancer cell and gene therapy research. The Swim has supported nine different scientists over the past 11 years.

While Swim Across America is a national organization and offers 20 open water swims from Boston Harbor to under the Golden Gate Bridge, its roots are firmly anchored in Connecticut and along the shores of Long Island Sound. Darien resident Matt Vossler and his lifelong friend and college roommate Jeff Keith founded Swim Across America in 1987.

Honorary co-chairs of the Swim Across America Greenwich-Stamford event are Olympic Gold medalist Donna de Varona (1960, 1964 Olympics) and her husband John Pinto of Greenwich. Olympic swimmers Beardsley (1980) and Teuscher (1996) were also at the swim, with Teuscher diving in the water with the rest of the swimmers.

Editor’s note:  Some details provided by the organizer were incorrect; GMW has updated and corrected the information and regrets the error.

Vanderslice Update on Eversource: No Road Clearing Crews is “Unacceptable and Ridiculous”