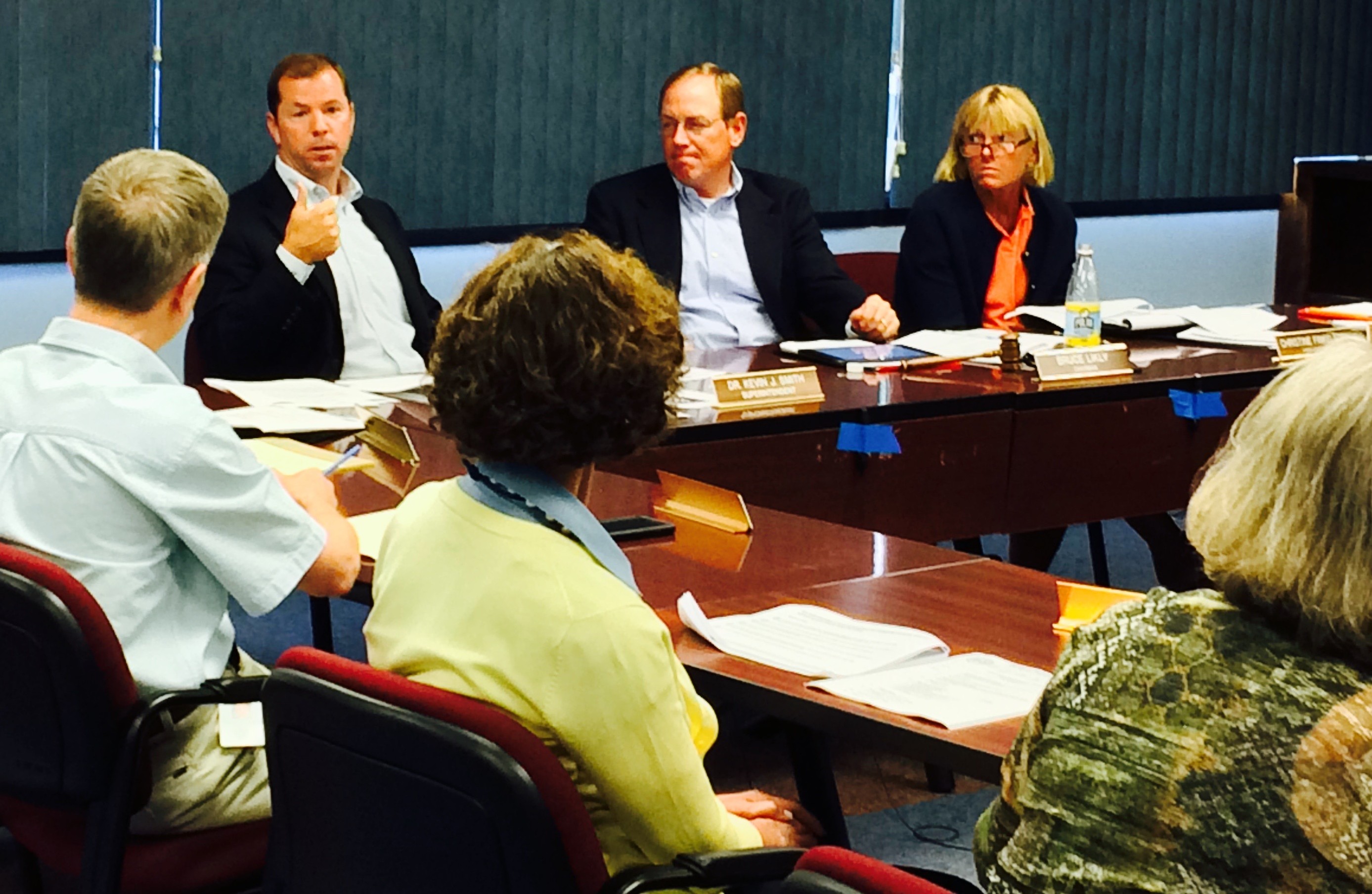 For the past year, the Board of Education has been reviewing whether to keep the school district’s current policy of not weighing grades or to institute a weighted grade system at Wilton High School. At Thursday night’s (March 10) BoE meeting, following extensive discussion and a board divided in its opinion, board member Chris Stroup suggested they postpone the vote on this policy issue until the next meeting, March 31 in order to take the time to review a very complex question.

[Read our article and tell us what you think in our poll at the end of the story.]

The Case Against Weighted Grades

Dr. Kevin Smith, superintendent of schools, served on the BoE Communications and Policy Committee with BoE chair Bruce Likly and vice chair Chris Finkelstein; their committee was charged with looking into the question of weighted grades. Of the three members on that Committee, Superintendent Smith was the lone voice against weighing grades

Smith opened the BoE’s discussion by reading a prepared statement in which he reviewed the available learning and ultimately supported maintaining the current grade policy. He explained that, in his view, “…transitioning to a weighted system is inconsistent with our vision for learning and teaching.” He noted that this issue has apparently been raised roughly every ten years. Smith drew his conclusion based on several factors:  spending a significant amount of time reviewing available research; WHS’s college acceptance data; input from college admissions officers as well as from Dr. Matt Greene, a college admissions consultant (and Wilton parent); several different models of weighted systems; and feedback from teachers, students and parents.

Smith explained there is a perception among many students and parents that an unweighted grading system puts WHS students at a disadvantage in the college admissions process versus those from schools that use a weighted system. However, data indicates that the WHS students’ acceptance rate at Most/Highly Selective colleges in is line with the rates at New Canaan and other area schools that do use a weighted grade system. While he acknowledged that roughly 70-percent of high schools across the country use some form of grade weighting, there is no consistency as to which classes are weighted, by how much and how the weighting system is explained in student’s high school transcripts.

He summarized the benefits and drawbacks of both unweighted and weighted grading systems.

Smith cited feedback from college admissions officers, including those at Johns Hopkins, Dartmouth and NYU. They reported that they look carefully at the profile of each applicant’s high school; that high school grades in college prep courses are a key factor in their admission decisions; and that overall, most felt Wilton students are not disadvantaged by an unweighted system. He also noted that WHS teachers appear unified in support of the current policy for many of the same reasons he outlined. Finally, he raised the issue of the complexity of how to construct a weighted system.

While he urged the board to retain the existing non-weighted grading system, he also acknowledged the need to ensure consistency of grading practices across a course taught by different teachers and across all courses, to review the grading scale and to ensure appropriate support for students and parents during the college admission process.

The Case For Weighted Grades

Finkelstein spoke on behalf of Likly and herself as the two members of the Communications and Policy Committee to voice support for adopting a weighted graded system.

One thing she said they found was that student athletes may be at a disadvantage in the college recruitment process because NCAA forms ask for a student’s GPA, but don’t take into consideration whether it is weighted or unweighted, or the difficulty of a student’s course load. What’s more, she and Likly believe that WHS students taking college level courses deserve to be rewarded with extra credit.

While she acknowledged that, as Smith said, college admissions officers canvassed stated that they deconstruct every transcript they receive and rebuild it based on their own metrics, Finkelstein mentioned that several admissions officers – speaking off the record – also admitted that applications with lower GPAs were often weeded out during very initial phases of the review process, before consideration of other factors.

Finkelstein pointed to the lack of a universally recognized scale for weighting grades as something that complicates the process, noting that some school districts use a 5.0 scale, others a 7.0 scale, some add a full grade letter bump for an AP class, while others only add extra credit if a student receives a score of at least a 3 on the AP exam.

After consideration of all the pros and cons, she and Likly felt that, without weighted grades, Wilton students will continue to submit transcripts with lower GPAs than their peers from other schools, and therefore they were recommending that the District adopt a weighted system.

Among the remaining four BoE members, several others raised concerns about moving to a weighted grading system. Laura Schwemm, Glen Hemmerle and Lory Rothstein all supported keeping the district grading police as it stands now—to not weigh grades. That put the tally at two for weighing grades, and three against.

Rothstein made a statement at the meeting saying that while she was “strongly in favor” of a weighted grade system a year ago, but she has now changed her mind. In a statement emailed to GMW.com the day after the meeting, she made a different point altogether as to why she agreed with Smith in opposing any weighting.

“It bothers me that not one member of our faculty, staff, administration or counselors, has come forward in support of weighted grades. If I were to vote in favor of weighted grades, I feel that I would be creating a great obstacle for Dr. Smith to overcome still so young in his tenure here. When we hired him, I promised to support him, have his back, and help remove obstacles in his way, not create them. Doesn’t mean I always have to agree with him, but I do want him to succeed for the good of the whole school system,” she wrote.

Stroup was the only member who said he wasn’t ready to make a decision in favor of either plan, and said he wanted to review the opinions on both sides. He made a motion to postpone a vote until the next BoE meeting, scheduled for March 31, at 7 p.m. in the Wilton High School Professional Library. The board unanimously agreed to table the vote until then.

At the end of the meeting, the BoE invited additional public comment. Marianne Gustafson, a parent of two WHS graduates, spoke in support of weighted grades, explaining, “There is a difference between an A in PE and an A in Honors Chemistry.”  She also expressed concern that students in Honors/AP classes were expected to do more independent work, a fact that should be recognized and rewarded with weighted grades.

Gustafson reported that admissions officers at Duke University told her they don’t have the time to recalculate students’ GPA’s. “WHS students compete against some of the best schools in the area. Colleges will only take a certain number of students from each high school, so why aren’t we presenting our students in the best light? We shouldn’t ask the colleges to decipher what [courses like] Humanities are worth.” As a solution, she recommended that WHS adopt both an unweighted and weighted GPA system.

Tell GMW.com what YOU think!

Do you think WHS grades should be weighted? Do you think the Board of Education should keep the district’s current policy of not weighting grades? Let us know in the poll below!