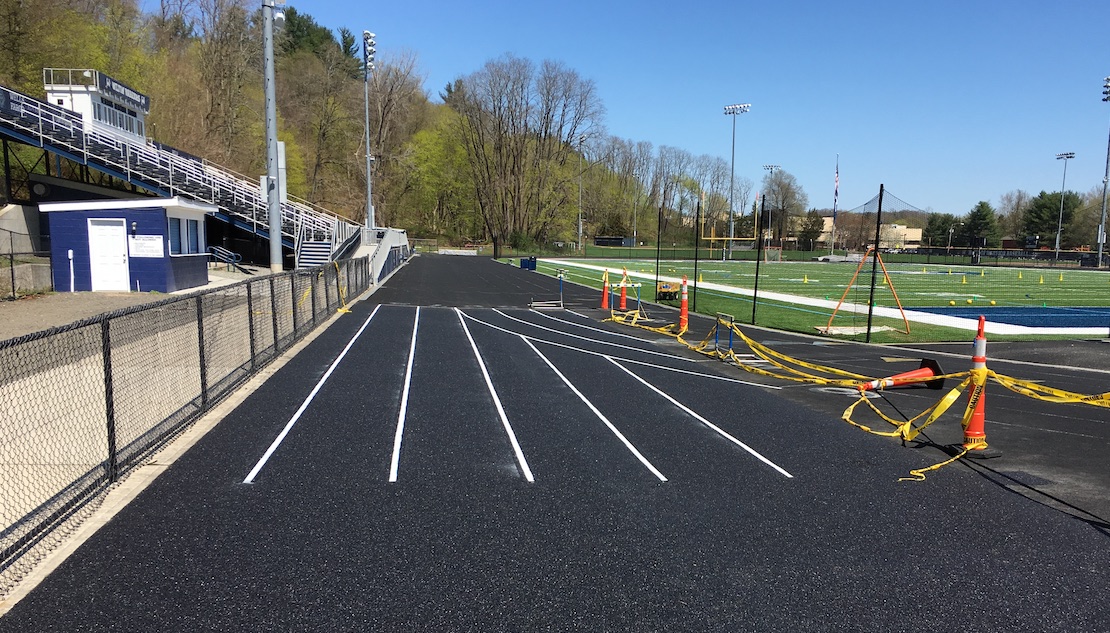 The Feb. 1 Board of Selectmen meeting had two major items on the agenda, including a Wilton Library budget review and an update on the proposed Wilton High School stadium track renovation. Both discussions were refreshingly upbeat with plenty of GOOD news.

The Schenck’s Island parking lot project, a last-minute addition to the agenda, found some momentum at the meeting, too.

After a lengthy search and planning process, the town has received a final bid from Cape and Island Tennis & Track, a Massachusetts-based contractor with over 600 New England high school and college track projects under its belt, for a “complete replacement of the existing running track surface” and other improvements, according to the proposal.

Insurance, surveys, perimeter structure protection, drainage inspection, electrical conduits, repairs to damaged drain encasement, installation of a pole vault base, and NFHS-certified line-markings, among other things, are also included in the base price.

Optional, colored track and D-zone areas were priced separately, starting at $42,300. These options are very desirable for track and field events (such as for relay race baton exchanges, for example).

In Nov. 2020, when the BOS approved the project based on preliminary estimates, the cost was expected to be over $1.2 million. The final budget numbers, even including optional elements, are far below expectations.

Making the final budget numbers even more attractive to the BOS was the donation of $80,500 toward the cost by Back the Track, a private group of Wilton residents that had worked closely with the Wilton Parks and Recreation Department in the early planning stages for the project in addition to doing fundraising for it.

In announcing the gift, Back the Track representatives Kevin Foley and Bev Hermann praised the work of Wilton residents Kim Dejana, Jen Davatzes, and Arlena Welch, and WHS coach Jim Gerwick in the fundraising effort that included events at Marly’s restaurant and Trackside, a 5k/fun run and countless individual donations.

Wilton Parks and Recreation Director Steve Pierce echoed the thanks for Back the Track’s early involvement, “to get us on the right track, no pun intended, to come up with what we anticipate will be a real asset to the community.”

Selectman Ross Tartell added, “This team put together a great proposal,” and summarized his thoughts on the project by saying, “I’m so pleased that we’re going to do something that will turn us into a destination for athletics. It really raises the level of the town and we’re doing it in a way that’s cost-effective… it’s going to pay off for the town.”

Pierce also exuded confidence in the project, saying it was “a very good price with a very reputable firm” (referring to Cape and Island Tennis & Track).

The BOS indicated its intention to finalize the contract pending a review by town counsel, but not before Selectwoman Deb McFadden inquired about potential cost contingencies, particularly in terms of issues with drainage and drain damage at the existing track.

Pierce responded that the proposal includes a 10% contingency on all aspects of the work, but said he was “very comfortable” that upfront work and inspections had been thorough enough to properly anticipate the scope of the work and “minimize surprises.”

The track surface also comes with a seven-year warranty.

One outstanding detail still to be determined is timing, with the high school spring sports schedule a key variable. Pierce indicated that depending on the sports calendar, work would be completed by August or September. The final contract is expected to include penalties for the contractor if the project is not completed on time.

After the meeting, Hermann told GMW that Back the Track’s fundraising efforts were now officially closed.  She also said, “We are so grateful to all of our donors big [and] small. It was a tremendous grassroots effort!”

Wilton Library executive director Elaine Tai-Lauria began her presentation by noting it had been nearly a year since she last updated the BOS, with the COVID-19 pandemic wreaking havoc in the meantime.

While the library doors may have been closed to the public much of the time, Tai-Lauria proudly highlighted the library’s many advances during the year, including, among others:

Acknowledging the extraordinary impact of the pandemic on Wilton Library’s operations, Tai-Lauria credited the staff with successfully “pivoting from in-person to digital platforms.”

“The pandemic did serve as a catalyst to change the way we do business,” Tai-Lauria told the selectmen, citing several examples such as launching live story-times for children via Zoom, re-designing programs for virtual formats, and enhancing digital resources to allow patrons remote access. The library even created the “Book A Librarian” program, offering 1:1 assistance to patrons learning to access resources online and navigate the library in the new environment.

But one of the major blows to the library during the pandemic was to fundraising. The annual gala fundraiser planned for March was postponed until November when the event was held virtually. The April book sale was canceled; book sales and other revenue were down 82% versus the previous year. The Annual Appeal was down 10%.

Kim Healy, treasurer of the library’s board of trustees, reviewed topline budget numbers from June and December of 2020. Despite the fundraising shortfall, the library is actually reporting a budget surplus for the 2020-2021 fiscal year, thanks in large part to a federal PPP loan of $375,000.

Healy reported that the PPP funds, used for payroll reimbursement, have been “entirely forgiven.”

First Selectwoman Lynne Vanderslice questioned how the 2022 budget would reflect the fact that the $375,000 was used to reimburse expenses that the town had in effect also paid for in the yearly Town Grant to the library. Vanderslice anticipated that some funds would ultimately go back to the town once the fiscal 2022 numbers were “settled.” Healy was in agreement.

In a preliminary forecast for the 2022 budget, the library’s town grant request is $2.852 million, an increase of 1.78%. The increase reflects, in part, a salary increase for employees following the previous year with no salary increases.

Library officials will have a bit more time than usual to finalize their budget request to the town. Not only is it relatively early in the budget planning process, but, in a break from the usual town budget timelines, FY-2022 final budget proposals will not be presented to the Board of Finance in early March.

Vanderslice explained that recent executive orders from Gov. Ned Lamont will allow the BOS to adopt a budget timeline that differs from what’s outlined in the Town Charter, in order to adjust for COVID-related interruptions.

Healy will complete her term of service at the end of the library’s current fiscal year (June, 2021). Incoming treasurer Mike Boswood was introduced at the BOS meeting. Michelle Klink, president of the library’s board, will also finish her term in June.

The topic of the Schenck’s Island parking lot was a last-minute addition to the Feb. 1 meeting agenda.

Vanderslice noted that the project has renewed interest following the recent EDC small business forum when the idea of using Schenck’s Island as a location for the Wilton Farmer’s Market was raised.