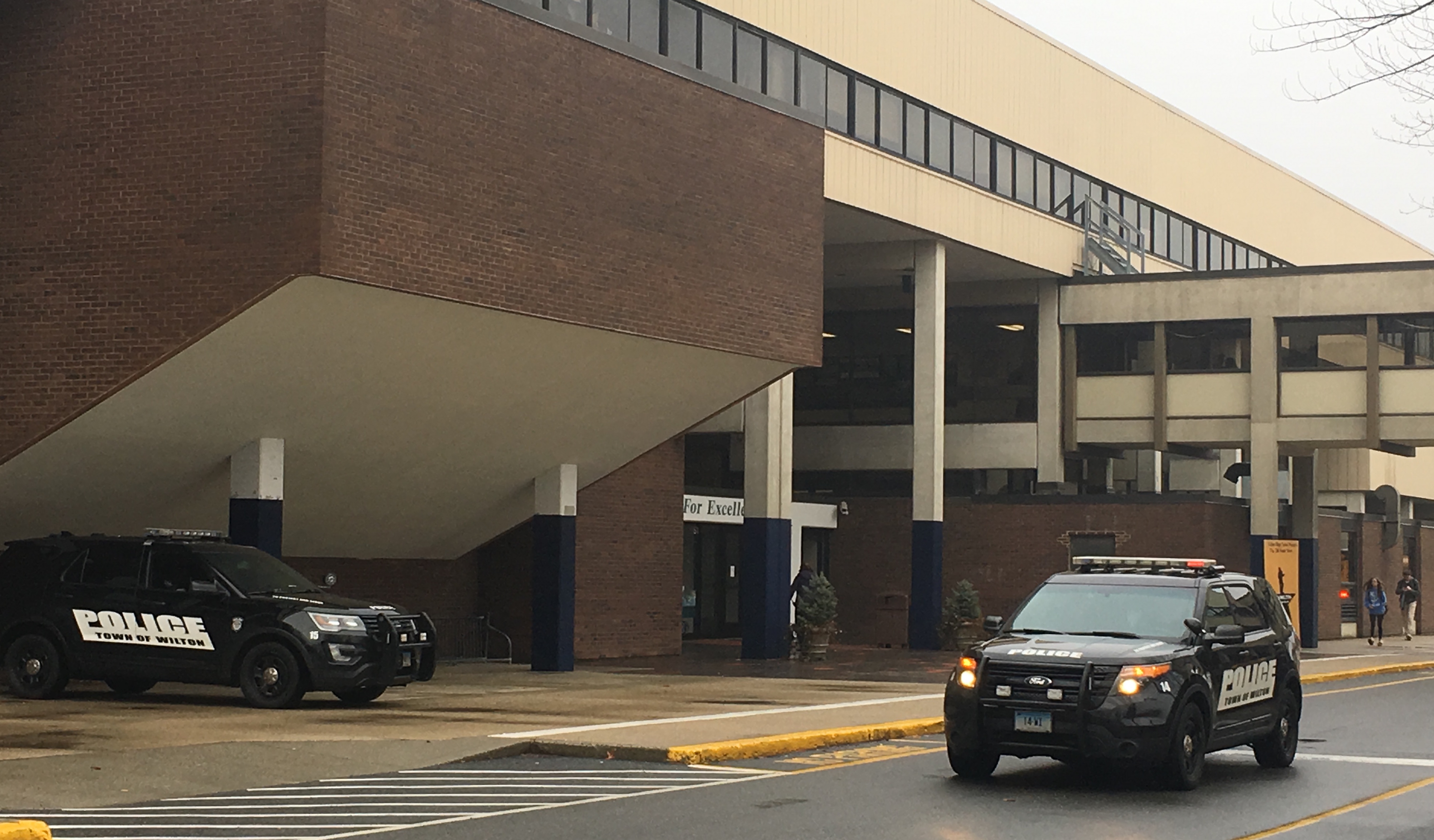 BREAKING NEWS, Wednesday, Nov. 20, 3:30 p.m.–Just a short time ago, Wilton High School principal Dr. Robert O’Donnell emailed a letter to members of the school community alerting them to a threat that had been made against the school by a student. Almost simultaneously, the Wilton Police Department issued a press release announcing that a student had been arrested on a breach of peace charge for making a threat against the school on social media.

On Sunday, Nov. 17, 2019, at approximately 7 p.m. the Wilton Police Department was notified about a video posted to the social media site TikTok involving a possible school threat. The post was a video made by a student from Wilton High School that suggested the threat of violence.

According to Capt. Rob Cipolla of the Wilton Police, members of the department’s Patrol and Youth Division were able to immediately identify the student that posted the video. Officers went to the student’s residence and contact was made with the student and the parents at 9 p.m. that same evening. Police interviewed the student at home; according to the police report, “the interview of the student revealed that it was not meant as an actual threat and was posted to gain likes on the social media site. The student also stated that it was taken down shortly after it was posted. The student appeared remorseful and understood the consequences of his actions.”

Cipolla noted that at no time did the individual have access to guns or any other weapon.

“The involved individual was cooperative, the parents were cooperative and we determined that this wasn’t a viable threat with any foundation or basis. Like we’ve seen previously with these kinds of things, youth really need to be cognizant of the social media platforms and space. People think that they can act in anonymity there and do what they want, but the same rules apply about stuff you wouldn’t say when you’re in school, you should be cognizant that it is not appropriate to say or suggest in the social media space,” Cipolla said.

In his description of the TikTok video posted by the student, Cipolla said the video showed the accused lip synching with what he believes was audio of a male voice from the video game “Call of Duty” playing in the background or dubbed over the video.

“He’s kind of lipping the words from the video game, but within it, there were some labels or captions that were placed within the video that make references to teachers–no one specifically, just ‘teachers’ to make it context of a school-type setting. At one point toward the end there are gunshot from the video game…not actual gunshot,” Cipolla described.

Cipolla reiterated there was no direct threat made against any individual or a specific threat of violent action. “At no time was there a viable threat from this individual. And there were no means to carry anything out of that nature.”

“The video would cause someone familiar with the person, would cause them alarm and concern. It wasn’t a direct [threat of], ‘I’m coming to school,’ but in the context with the video game, the words, sounds, and captions provided in the posting… would be reasonable to cause them alarm or fear [for the community],” Cipolla explained.

Aside from “Call of Duty” gun imagery and sounds of gunshots, there were no other weapons depicted in the video. There were no actual weapons or guns displayed by the student.

The student was arrested for breach of peace and was released into the custody of the parents. The individual is scheduled to appear in Norwalk Superior Court later this month. Police reiterated that, “Throughout the investigation the student and the parents have been cooperative with investigators.”

Police are not releasing any identifying information about the person or persons who made the initial complaint, except to say it was a resident who saw the social media post on the TikTok app.

“The person is anonymous, we obviously want to encourage people when they see things like these to feel comfortable coming forward and reporting their concerns so we have the information and can act on it as swiftly as possible. I don’t want to release anything that could potentially identify the person–we’re grateful,” Cipolla said.

According to the press release, in light of the investigation the Department has increased its presence and visibility in the school areas.

Shortly after dismissal at the end of the school day, WHS Principal O’Donnell sent the following letter to members of the school community:

I can share with you the following summary of the incident: On Sunday, November 17, 2019, at approximately 7:00pm the Wilton Police Department was notified of a video posted to a social media site involving a possible school threat. The post was a video made by a Wilton High School student that suggested the threat of violence directed toward the school. Members of the Department’s Patrol and Youth Division were able to immediately identify the student that posted the video. Contact was made with the student and the parents at 9:00pm on November 17, 2019, at their residence where the student was interviewed. District and school level officials have been working closely with the Wilton Police since the incident was brought to our attention. I reiterate that there is no threat to our school community as a result of this incident.

In an era when incidents of violence occur far too frequently, I will reemphasize that we all must remain vigilant in our common effort to ensure the safety and security of our community. As part of that effort, we again remind all members of our community that if they “see something, say something.” Doing so can have a profound positive impact on the lives of all members of our school community.

I would like to extend my gratitude to the Wilton Police Department. As always, if you have questions or concerns, please do not hesitate to contact me.

5:25 p.m.–Superintendent Smith just emailed a message to the school district reiterating assurances of safety and swift action on the part of police. He shared the letter sent earlier to the high school community by O’Donnell with members of the wider community.

In his message he wrote:  “I share this information with you so you have the facts and to reassure you that we have policies and procedures in place that prioritize the safety of our children. We are committed to being vigilant and will continue to rigorously assess our practices.

“Finally, I’d like to echo Dr. O’Donnell’s sentiment that as part of our common effort to ensure the safety and security of our community we ask that you report any concerns that may arise. As we repeat to our students, ‘if you see something, say something.’”

Learn What To Do in Emergencies, as CERT Offers Disaster Preparedness Training