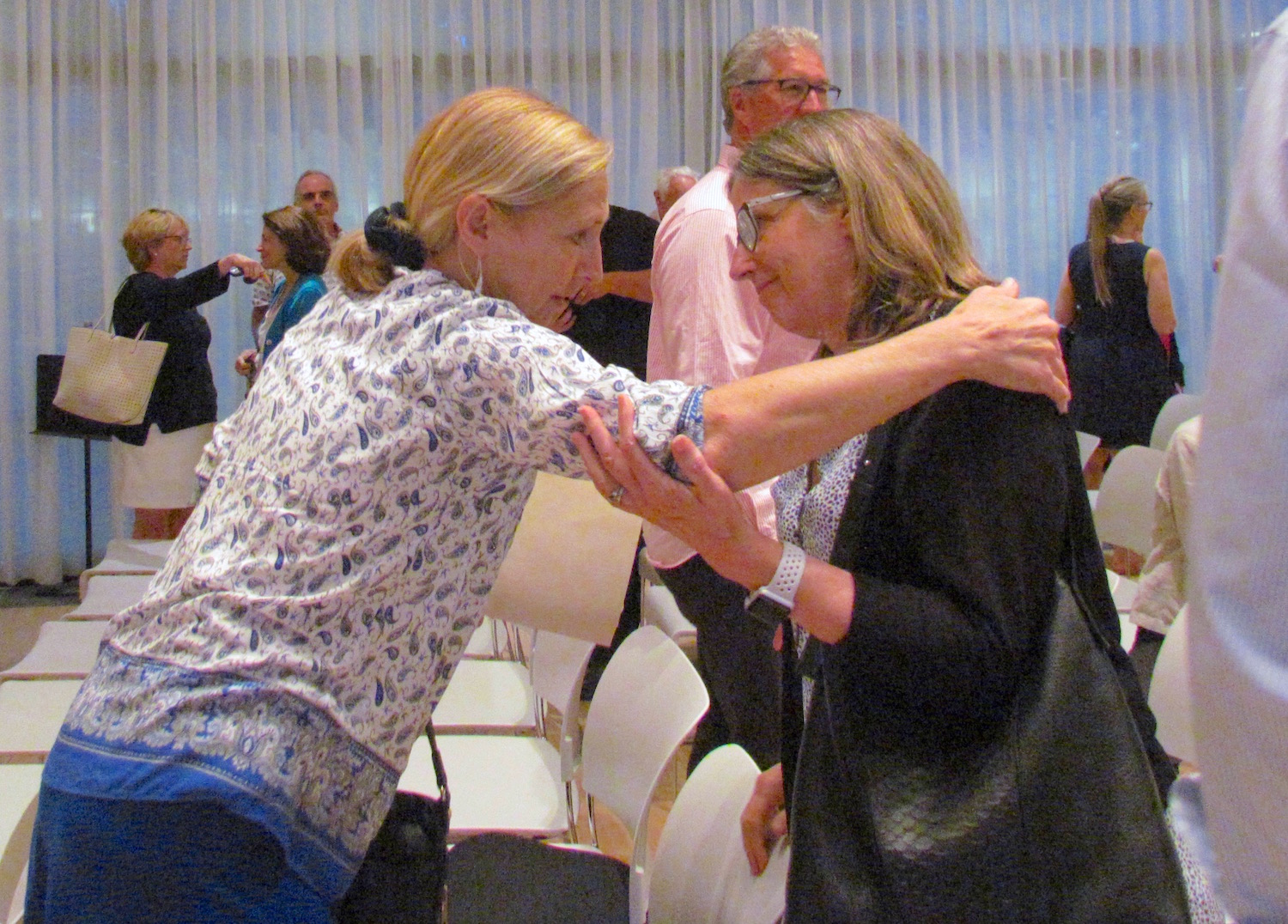 In a completely surprising development at Monday evening’s Planning & Zoning meeting, Wilton’s town counsel Ira Bloom informed the members of the P&Z Commission–as well as approximately 100 members of the public–that he was recommending that the town’s Age Restricted Development regulation (AROD) be rescinded.

Bloom’s recommendation followed his review of claims made in a lawsuit filed last week by Patricia Frisch, a Ridgefield Rd. resident, to block the town’s AROD regulation. Bloom said that lawsuit identified a “defect” in the way the town had posted public notice after P&Z  approved the AROD regulation in November. According to the lawsuit, the Commission had approved an effective date of Nov. 17, 2016; the public notice about AROD being put into effect was published in the newspaper on Nov. 17, 2016–the same day the regulation became effective.

“The state statutes, specifically section 8-3D, require that notice of any zone change or new zone regulation be published in a newspaper… before an effective date. It was published, in this case, also on Nov. 17. So the claim was that that was another defect, because the effective date was the same as the publication date,” Bloom explained.

“As a consequence, since we’ve confirmed with the AROD situation, we have the same defect and it’s a serious defect, I’d go so far as to say it’s very likely fatal issue that a court would conclude, undoubtedly, that this regulation would be void.”

Bloom had already briefed the P&Z Commissioners about his findings in an executive session that was held just prior to the start of the meeting. Now, explaining it to them again in front of the public, he pointed out that while he was recommending that they vote to rescind the AROD regulation, there was a complication that would prevent them from doing so Monday evening.

The commission decided to follow that recommendation and move the question of rescinding the regulation to that June 26 date.

Chairman Joe Fiteni let each of the commissioners have a chance to tell the public what they thought about the AROD regulation and everything that had led up to that evening. It was the first time that they had been able to comment publicly about the community’s response and the outpouring of opposition that had been expressed during the two prior public hearings.

Several said that while the town does need to take steps to diversify its housing stock and that some sort of responsible regulation is important, they came to recognize that the AROD regulation which had been put into place had its flaws. Many of the P&Z members commented on the impression that was made by such intense public response.

“You have enlightened me about a great number of things,” Tierney O’Hearn told them. “I want you to know that we hear you, and we’re listening.”

Rick Tomasetti echoed O’Hearn’s comments. “When I see almost every resident of Ridgefield Rd. show up, I have to look at it and say, what’s good and what’s bad about the regulation. The issue of who we are as a town and how we plan our future isn’t going to go away.”

Scott Lawrence noted that the public frustration grew out of a lack of communication. “If you think we’re not listening, we are listening.  Will be revisiting it, try and listen to what we heard, and try to blend into it what we’ve heard, considering new things,” he said, adding that the process for developing the Plan of Conservation and Development is designed to make sure that the public’s voice is part of the final revisions.

Knowing that the current AROD regulation will be rescinded, the commission did try to explain what will happen when it addresses AROD again and how it will make sure to better allow the public have more input.

“I can’t tell you when but we will be revisiting it. We will try to listen to what we heard and blend into it as much as we can what we heard. There will be a full set, it is a change in regulations, it will be noticed, it will be published, it will be clear about what we are doing so we don’t run into people saying they didn’t understand,” Fiteni said. “It will go through a full public hearing process, where everybody will have the opportunity to comment on any of the specifics that will be in any new AROD.”

Lawrence reiterated the same point:  “The community is going to be engaged.”

Public Reaction in the Meeting

Most members of the public in the audience were initially stunned. Then they started trying to understand what would follow once the AROD regulation was rolled back–both in the short term for the 183 Ridgefield Rd. project that they objected to; and in the long term and what it meant for how the town would pursue planning for more varied housing, and whether and more thoughtful approach to AROD–along with better communication between residents and town officials–might work.

There was some initial fear that even if the AROD regulation was rescinded, that the 183 Ridgefield Rd. LLC application for a zone change to AROD could still proceed because it had already been filed. When Frisch asked questions about whether that could happen, Bloom explained that the 183 Ridgefield Rd. application proceeding and getting approved was virtually impossible.

Bloom:  “The [183 Ridgefield Rd. LLC] application has been filed. It could be withdrawn. Or it could be denied. It won’t be granted after they rescind it. So you can be sure of that.”

Frisch wanted to confirm:  “So if it’s not withdrawn voluntarily, you’re saying the Board doesn’t have the power to say it’s no longer under consideration?”

Bloom began to say:  “They can’t tell an applicant that they won’t hear it, once it’s filed. So something has to happen. The two things logical to me are it gets withdrawn by the applicant–which I hope he does–”

Frisch:  “And if he doesn’t they can deny it because there is no regulation under which its authorized to grant it?” Frisch finished.

Frisch:  “And that leaves the applicant in the position where he can choose to go to court and challenge the board’s denial?”

After the hearing concluded, there were several fellow Ridgefield Rd. neighbors who congratulated both Frisch and Vicki Mavis,  the primary force organizing opposition to higher-density housing development on the road where she lives. The two women embraced as they celebrated the evening’s developments.

Frisch told GOOD Morning Wilton that she hopes her lawsuit will have a longer lasting, more far reaching impact than just halting the current AROD regulation.

“The Board will become more aware and thoughtful about what notices it needs to send out on all matters that come before it, and that its notices will be more informative in the future for the town residents. And that they’ll be more respectful of the technical requirements of the law.”

The other benefit, says Frisch, is the feeling that many residents walked away with, the feeling of being heard.

“The were all really careful to say words of encouragement to the community, that they were listening to us. That even though many of us sometimes felt that perhaps we weren’t being heard, that maybe we were being heard. They all assured us that we were, and lets hope to be true.”

For Mavis, the victory was in how active so many people in the community got around this issue.

“It was never, never a one person effort. This was really the town coming out like we hoped it would, to say, ‘This matters. This isn’t right to us.’ A lot of people came forward and made a difference. And actually, that’s the good news here, that this is really what Wilton is capable of, when it’s motivated to come out,” she said, later adding, “It shouldn’t be dismissed, is the important thing. People want to feel that they’re making a difference. People want to help with the burdens that our [first] selectwoman is dealing with.”

An associate with the authority to speak on behalf of Jim Fieber told GMW that he had no comment following the night’s events. UPDATE 9:40 a.m.:   Fieber released the following comment to GMW:   “We are considering all options at this time. The negligence and ineptness of process has caused irreparable harm and substantial damage.”