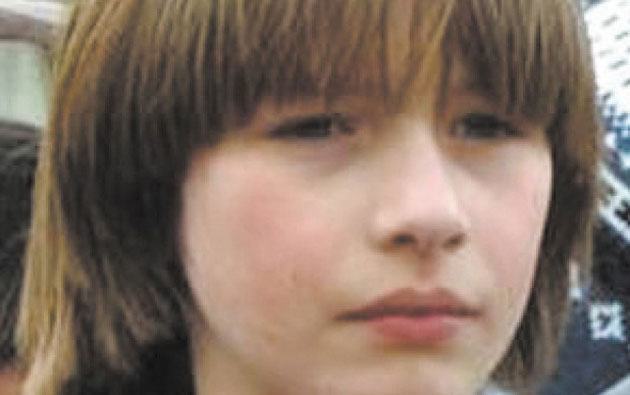 BREAKING NEWS, April 17, 2015  3:15 p.m.– In a Stamford courtroom today, the Parisot family of Wilton heard 18-year-old John “Tully” Knight say the words that they have waited almost seven years to hear:  he admitted responsibility in the death of their son, Nicholas Parisot on June 13, 2008.

In front of about 40 spectators, wearing a white shirt and glasses, his hair pulled back in a ponytail, Tully sat at the witness stand not looking at Nick’s parents, Kate Throckmorton and Rick Parisot, who were sitting at the plaintiff’s table just 20 ft. away. On the plaintiff’s table placed upright on easels were three photos of Nick, facing the spectators in the courtroom. Printed on the other side of the photos, facing Tully, were the chilling words, “Someone I love was murdered.”

With a slight, soft voice, that at times couldn’t be heard, Tully began to speak as he answered the question from the judge:   “Yes, my conduct was responsible for the death of Nick Parisot.”

Timeline of the Case

On that June day in 2008, 13-year-old Nick, was riding his motor bike on the trails he knew well between Hillbrook Rd. and Hickory Hill Rd. when he struck a rope someone had tied across the path. The medical examiner determined that Nick died as a result of the injuries and neck trauma he sustained. He was just two weeks shy of turning 14.

In the years immediately following Nick’s death, Police had identified one or more individuals as potential suspects but were hampered from making any arrests without eyewitness accounts. They made several public appeals for anyone with information in the case to come forward.

In June 2009, the Parisot family filed a civil lawsuit against another Wilton family, Glenn and Barbara Knight. The Parisots alleged that the Knights’ son was responsible for Nick’s death. In 2010, the Knights moved from Wilton to California.

In August of 2012, Wilton’s Detective Christopher Isidro flew to California and arrested Tully Knight in connection with Nick’s death. He was charged with second degree manslaughter and extradited to Connecticut. At the time police and media continued to withhold Knight’s name because he was still a juvenile. Only 11-years-old when Nick was killed, Knight is now 18.

When everyone was in the courtroom, shortly after 2:15 p.m. today, Judge Terence Zemetis made a statement describing the claims made by the Parisot family in their civil suit against the Knights. He stated that, according to the complaint, Nick was lawfully riding on the path, that it was a path he had an easement on which to ride, and that he was using the allowed equipment. Zemetis continued to state that Tully Knight was aware of this, and that together with [the previously unnamed] Sam Bell, he set a trap on June 11, tying a rope across the path. He stated that the rope was taken down and that Tully Knight put it back up on June 13. He stated that the trap was set on a curve to make it difficult to see. He stated that after Nick struck the rope, it broke and Tully removed that broken end of rope from the scene, that he attempted to conceal that he had done this, and that he made false statements. He finished by stating that the Parisots pursued their case against the Knights due to Nick’s anguish, emotional distress and horrible pain that was caused by Tully, cutting short the expectation for Nick’s long and healthy life.

The Judge then faced Tully and asked him if there was reason that he couldn’t voluntary participate in the hearing; Tully answered, “No.”

The judge then asked the same question of Tully’s parents and they responded, “No,” as well.

It was then that Judge Zemetis asked, “Do you admit that your conduct was responsible for the death of Nick Parisot?”

“Yes, my conduct was responsible for the death of Nick Parisot,” Tully said.

After Tully returned to his seat, the Judge asked if either Rick or Kate wanted to make a statement.

Rick stood up, and looked directly at Tully and his parents as he moved to stand at the front of the courtroom with the Parisot’s lawyer David Golub at his side. He began to address the court:

“On Friday the 13th June 2008, Nicholas Parisot lost his life to a premeditated, deliberate, intentional and malicious homicide.  He was murdered.

“The State of CT Juvenile Justice system has excused Tully Knight’s charge of manslaughter for negligent homicide. That display of justice forced upon myself and my family was obtuse, disgraceful and an insult.

“I believe that Tully Knight with his accomplice Sam Bell rehearsed a premeditated killing of Nicholas two days prior to Friday the 13th. I believe it was in order to act out some disturbing scenes from the horror movies and videos that Tully Knight’s parents offered him for his childhood entertainment.

“I believe that Tully Knight is a murderer, a pathological liar, he is mentally ill and he is a danger to society. I believe it is only a matter of time before he acts out again, possibly like Sandy Hook, Columbine or countless other violent tragedies. The State of CT should be monitoring him for the rest of his life. If he acts out again the State of CT Juvenile Justice system should be made accountable for his actions.”

When the judge asked the Knights if they wanted to say anything, their attorney, Kevin Murphy stood and told the court that they had nothing else to say.

The judge then turned and spoke directly to Rick, and said that he was personally expressing his own unfathomable sorrow, regret and compassion for the loss they had experienced. He called it a “horrible tragedy” and said that he hopes for the sake of the family that Rick can come to some sort of peace. “I hope that what you believe to be true is not, I’m not saying it’s not, but I don’t have the evidence to support that.”

According to a statement made by the judge during the hearing, there will be other details of Nick’s death that will be released when the investigation report will be released. He added that while some records will be disclosed, others will remain sealed.

Details of the Settlement

Following the adjournment of the hearing, the attorney for the Parisots answered questions from the media.

When he was asked if there was any financial settlement, Golub acknowledged that there was a payment made from the Knights to the Parisots, but said “That’s not what this is about. There was a payment but the case is really about the admission by Tully Knight that he did this. What the Parisot family wanted was that he acknowledge responsibility in causing the death of Nick. That’s all they wanted.”

According to Golub, the Parisots received $5,000 from Tully Knight, $51,500 from Glen and Barbara Knight, and $500,000 from the Knights’ insurance company. According to details of the settlement, the Knights gave those payments with the understanding the Parisots would not continue to pursue a trial that could result in a multi-million dollar settlement. Golub alluded that had the case continued to trial, the financial penalty the Knights could have faced could have been “much, much more.”

Golub also acknowledged that the events that occurred in the hearing–including Tully Knight’s statement–was worked out through mediation with the judge. He said that the mediation has gone on since late February/early March.

When he was asked if the statement that Tully made in court today was less than what the Parisots originally asked for, Golub said that today’s result is what they wanted. He repeated several times that the civil lawsuit was “not about the money,” but rather that, “it was about the acknowledgement of responsibility.”

Glob added that even though Tully Knight was only 11 years old at the time of Nick’s death, “he still did what he did,” and that the Parisots still wanted to hear him acknowledge what he did.

The order regarding disclosure of records from the case issued today by the court can be found online here.

CORRECTION:  The article has been amended to note that only Tully Knight was present on June 13, and not both Knight and Sam Bell.

Editor’s Note:  At one time, GMW editor Heather Borden Herve was involved with the Wilton organization ‘Stand Up For Nick,’ which, according to their website, stood in support of the Parisot family in their quest for finding out the truth of what happened to their son, and encouraged anyone with information on the case to come forward.