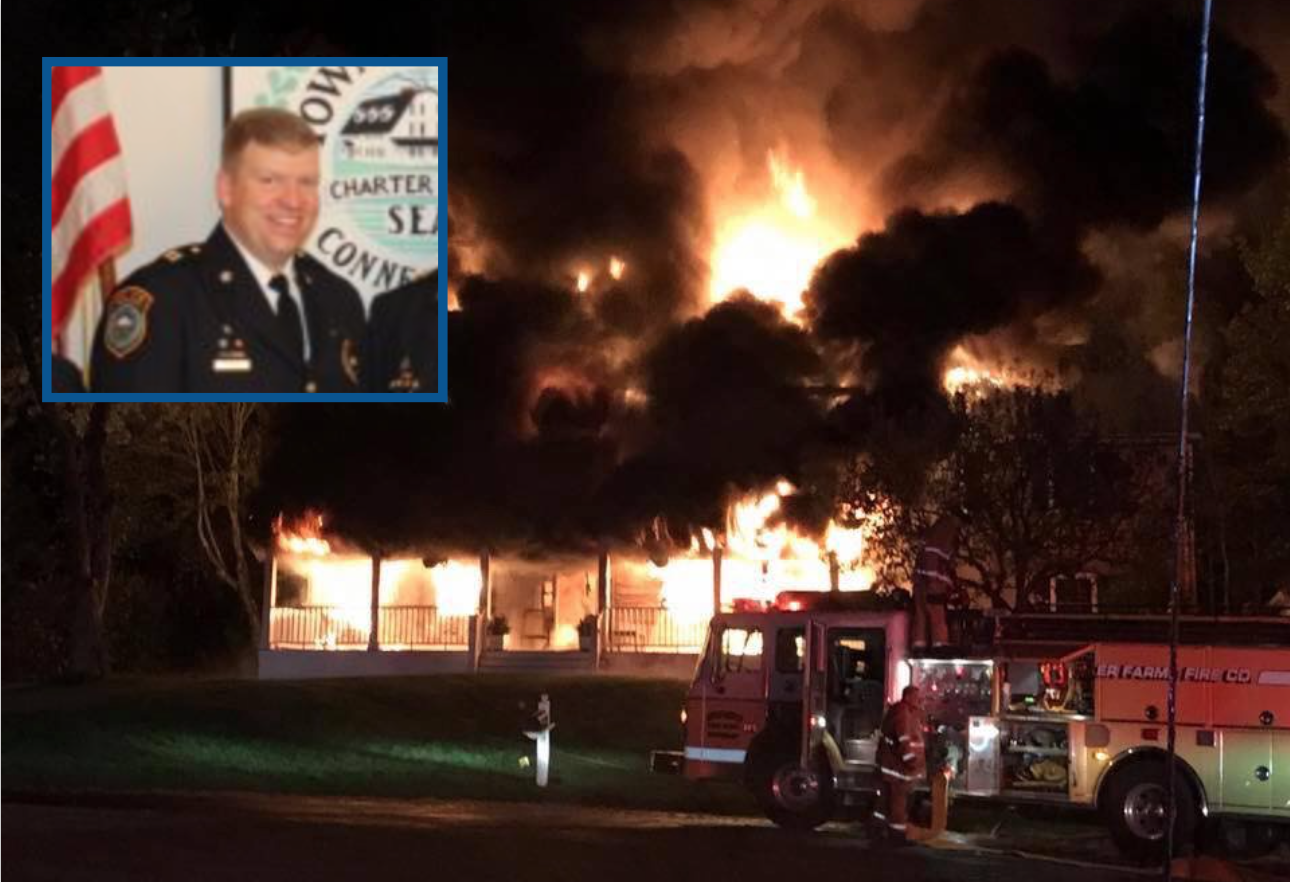 Thursday, Oct. 5 was Captain Tom Conlan‘s first full day back at work with the Wilton Police Department, following the devastating house fire that destroyed his family’s home in the early hours of Saturday morning. He said being at work was almost a welcome distraction from the aftermath of what his family experienced last weekend, as well as from the onslaught of dealing with the insurance adjusters, trying to secure temporary housing and the like.

It has also taken him several days to regain his composure, following the very frightening experience. He chokes up occasionally as he recounts what happened, understandably.

“It will take a long time. It’s getting easier, but if you had talked to me Saturday or Sunday, right after…” his voice trails off.

The fire started some time after 2 a.m. Saturday morning. Conlan wasn’t at home–he was three blocks down the road, at his mother’s house. There had been a family gathering Friday night–Conlan’s sister and brother-in-law were visiting from out of town and the extended family had gotten together. Conlan had stayed late to watch football with his brothers-in-law and nephews–but his wife and three children had gone home earlier, along with a niece who was spending the night with them.

That’s when his wife, Ashley, called, around 2:30 in the morning.

“I thought she was calling to say, ‘You’re out too late, you’ve got to get home.’ But what she said was, ‘I think the house is on fire,'” Conlan recalls. As he speaks, his voice catches, and you can hear how raw his emotions still are at the memory.

He tells how his wife had gotten all of the children out of the house–when their 8-year-old daughter remembered their dog was still inside. “My wife ran back in to get the dog out.”

It took him only a minute or two to get home. “As soon as I got there I told my wife and kids to get in the car. I didn’t want the dog running back in. And then I tried to put the fire out.”

At that point the flames weren’t clearly visible, but it smelled like smoke. Conlan walked through the downstairs and didn’t see any fire. It wasn’t until he walked outside in the back to try and find a hose that he saw the flames. “They were pouring out of the attic in the back of the house. I knew then there was no putting it out.”

Conlan and his wife decided they didn’t want the kids to see the house on fire, so she left to take the kids to Conlan’s mother’s house.

That’s where they’ve been staying since the fire, but as he describes, “We’re just stepping all over one another there.” They hope to move into another house they’ve rented next week. “Hopefully it will get easier, we’ll have our own space,” he says.

His children have been handling the situation well, all things considered. They even went back to school Monday morning. “We wanted to try and keep them in their routine. I think that’s made it easier,” Conlan says.

Little things happen when he least expects it to bring the emotion back–like when he found three, dry-cleaned shirts hanging on the back of his office door at Police Headquarters. “I just thought to myself, ‘Those are the only three shirts I have left.'”

What has been most comforting is the outpouring of support Conlan has received from both his local community where he lives in Oxford, CT as well as here in Wilton.

“It’s amazing. That Saturday afternoon, after the fire, the Oxford firefighters stopped by and gave us a bunch of pre-loaded gift cards so we could buy some things. Then the Oxford first selectman stopped by. Within a few hours we got emails from both our daughters’ teachers and the principal, the school nurse–right away they offered, ‘Don’t make lunches, the girls will just have lunch in school.'” he says. Those little things have much more significant meaning now.

His colleagues in the Wilton Police Department have been incredibly supportive, with donations of toys for the kids as well as financial assistance from the PBA and the union. So too have the teachers at the Bridgeport magnet school where Ashley works, rallied to offer assistance.

“There have been such generous donations–it’s really humbling,” Conlan says.

Among people who have reached out, Conlan mentions Lynne Vanderslice, Wilton’s first selectman, who he thanks for making a donation.”

“And seeing the YouCaring.com page. They’ve been so generous–people I know and then there are names I don’t even know,” Conlan marvels.

For now, the kids have received plenty of clothes. He says that toys would be welcome and, of course, monetary donations are the most helpful and go further.

Every once in a while, he regrets that with the fire so slow-moving, that he didn’t run back in to get mementos. “The laptop had a lot of pictures and memories on it. Look, as long as everyone is safe, but you can kick yourself for little things like that. But thank God everyone made it out all right. It is what it is, and hopefully within 6-12 moths, it will be a memory,” he says.

Conlan does have things in perspective:  “It could have been a whole lot worse. We’re lucky there.”

There’s a long list of people to whom he wants to say ‘thank you.’

“People in Oxford–people at town hall, the schools, the teachers. And people of Wilton have been, obviously unbelievable; The first selectman, she’s a really good first selectman, she made a donation; the teachers at my wife’s school. And then the people I don’t even know,” he says. “They’re donating money and leaving messages. It’s very humbling, and quite amazing. I never would have thought…”

Donations can be made via a YouCaring.com page that has been set up or through checks to the Wilton PBA, TC Fund which can be delivered or sent to the Wilton Police Department, 240 Danbury Rd.