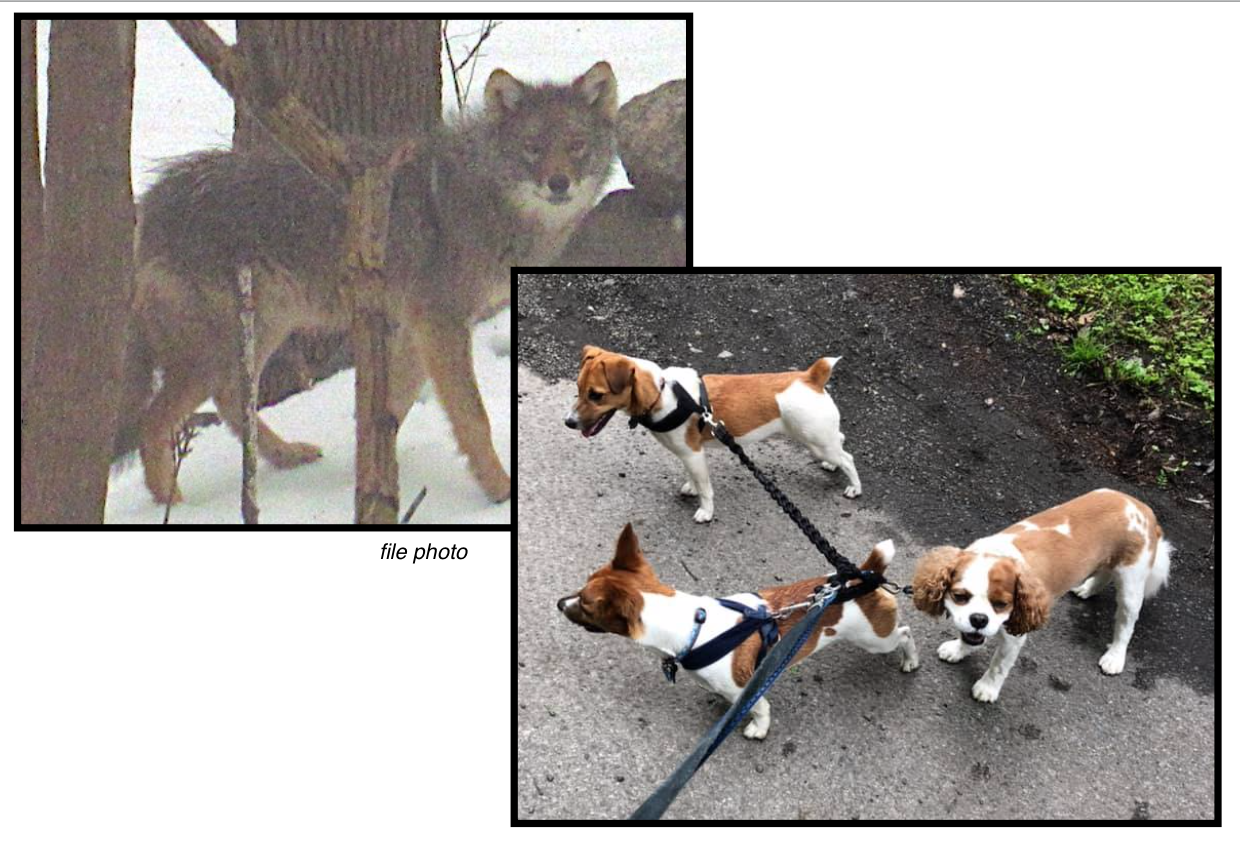 A close encounter between a coyote and a woman walking two dogs Thursday, May 30, on the Norwalk River Valley Trail has one Wilton family grateful to a stranger that their pets are still alive.

Phillip and Felicity Sissener‘s two beloved Jack Russells came face to face with a large coyote on the NRVT near the Sharp Hill Rd. parking lot, during a Thursday afternoon walk with the family’s au pair. That’s when a large coyote stepped out from the brush onto the path about 30 yards ahead of the woman and the dogs, before slowly turning to face them–and then began slowly creeping toward them.

“It got that close to her, maybe 10 feet  … so, at that point, she let go of the dogs in a panic,” Phillip recounts, “she was petrified.” The dogs, Emma and Charlie, ran in one direction, and the au pair ran in another.

That’s when Wendy Nadel, walking her own small dog on the NRVT, happened to come upon the scene.

“As I was approaching, I heard all this crazy barking, like crazy bark. And I heard somebody yelling which may have been the au pair. I approached a little slowly because it was around the corner. And as I peeked around the corner, I saw two Jack Russells barking away at this giant coyote, which I laugh now but at the time I was like, ‘Oh, no!'”

Acting on what she says must have been instinct, Nadel was able to scare off the coyote with some yelling. She grabbed the Jacks’ loose leash, and started to look for their dog tags to call their owner. That’s when the coyote returned, standing on the trail between Wendy with the dogs and her car parked in the Sharp Hill lot, just a few yards away.

At a couple points along the trail she looked back and spotted the coyote, some distance away but still following her and the dogs.

As she ran away from Sharp Hill, to Twin Oak, she managed to reach Phillip on the phone, and then also called 9-1-1. The dispatcher sent a police officer who met Nadel at the Twin Oak trail head, while Wilton’s animal control officer searched unsuccessfully for the coyote back near the parking lot.

A coyote bold enough to approach humans is not typical. Tricia Rosen, who supports several animal welfare and wildlife efforts, lives just around the corner from where yesterday’s incident happened. She thinks there may actually be a coyote den in the area–based on her own recent face-to-face meeting with a two coyotes nearby.

“I didn’t see the den but what I experienced makes me think so. I was walking home from the trail a week or so ago and made the turn onto Cherry Ln. A coyote came out of the woods and stood in the middle of the road and wouldn’t move. It finally moved into the brush and, as I tried to keep walking, another one came out from the other side and stood in the road and wouldn’t move. The first one had a baby in its mouth (it must have picked it up when it went back into the brush) and walked into the woods that run along the NRVT. The second one made noises at me so after a few minutes I backed off and had to call one of my kids to come pick me up. [The coyotes] did not want me to approach.”

That might offer some explanation for why the coyote that followed Nadel wasn’t as fearful of the humans. She theorized the same thing when she heard Rosen’s suggestion.

“That coyote wanted those Jack Russells for lunch. They were probably in defense and/or trying to bring back some food for their babies.”

Neither the two coyotes Rosen saw nor the one that followed Nadel appeared to be sick. “They were not sick. Just very bold and not backing away,” Rosen recalls.

Both women urge people not to overreact, however–just remain alert.

“I don’t want people thinking the coyotes need to be killed. [They’re] just more bold than we are used to. I normally run towards wild animals because I love seeing them. These coyotes were not having it,” says Rosen. The sightings won’t deter her from walking the trail, although she adds that she now carries mace with her when she does.

Although she will always be wary, Nadel will also continue to enjoy the trail, pointing out that in this part of Fairfield County, co-existing with wildlife comes with the territory.

“We moved into their world. We’re the invaders. So they really still think of this as their territory. But being humans, we’re frightened of them. I will carry something going forward. I don’t have mace. I don’t have anything like that. But I’m going to read a couple of those articles and figure out what I need to do,” says Nadel.

Nadel was lauded for her quick thinking and actions by people on Facebook. The Sisseners say they’re indebted to her.

“Honestly I think Wendy is a true heroine for doing what she did. I would have been petrified, and the fact that she just got in there and did that without even knowing whose dogs they were,” Felicity says.

Her husband, Phillip, agrees:  “There was a reason why she walked that path at that time, and it’s not like divine intervention, but I really think she’s a hero in our family. It could have been any other stranger that would have been like, “Not my dog, not my problem. She actually put herself at risk to save our two dogs. She really did a really great thing, and she needs to be recognized for that.”

For her own part, Nadel is a little surprised herself that she ran toward the danger rather than away to save Emma and Charlie.

“All I know is that I saw those two dogs, these little tiny dogs barking at this giant coyote. I love animals. I guess I couldn’t stand the fact of them getting injured or worse. When it backed off into the woods at first, I just grabbed their leash. It was very scary. I have seen coyotes. I have seen foxes. This guy was big. A lot of people would run away. And I don’t know why I didn’t. I don’t know, but I didn’t.”

Editor’s note:  GOOD Morning Wilton reached out to Wilton Animal Control but did not hear back by end of day. The story will be updated with any further information about any steps officers may take regarding the coyotes.

Photo note:  While the dogs pictured above are the ones mentioned in this story, the picture of the coyote is a file photo and not the animal involved in this recent incident.