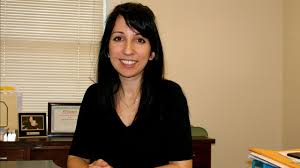 Alicia Kinsman, director of victim and trafficking services with the International Institute of Connecticut.

Sedate, bucolic New England. Who would ever imagine that the serious, dark topic of human trafficking had any relation to Connecticut or to Wilton.

Kinsman is an attorney from the International Institute of Connecticut, a statewide non-profit organization that aids victims of human trafficking. She will be the lunchtime speaker at an event hosted by the Wilton League of Women Voters, kicking off the group’s fall season on Friday, Sept. 20, 11:15 a.m. – 1:30 p.m.

That number Kinsman quotes consistently and significantly rises each year, a function, she said, of both an increase in this type of criminal activity as well as a direct result of agency investigative and identification activity. “Human trafficking is the fastest growing criminal enterprise worldwide, and I suspect the same here in the state of Connecticut.”

Wilton League president Amy Harris explained that promoting awareness and understanding of public policy and issues is core to the group’s message, both locally and at the state level. “Connecticut is not exempt from the issue of Human Trafficking and statewide, the League is having their Fall Conference regarding the scourge on October 26 in New Haven.  Locally, our League provides education on the issues and we have invited Dr. Kinsman to our Opening Lunch, open to all.”

The League also runs “Reel Mondays” in collaboration with the Library for showing a film and followed by discussion. Related to human trafficking, the WLVW will show “Walking Merchandise” in October.

Ms Kinsman, director of victim and trafficking services,  has been working with the International Institute  since 2010. Last year she traveled to Washington DC to accept the 2012 FBI Community Leadership Award for her outstanding work with survivors of human trafficking in Connecticut. Her presentation will describe the organization’s anti-trafficking work.

The meeting is open to the public with advance reservations by September 16. Contact Kim Nabulsi, 203-762-8496 or knabulsi@gmail.com for information.

The event, to be held at the Wilton Library’s Rimer Room, includes buffet lunch, and costs $15. Advance reservations are required.

The League of Women Voters is a nonpartisan, nonprofit political organization that encourages the informed and active participation of citizens in government. The League promotes understanding of public policy through studies, information, and advocacy. Members of the public and new members—men and women—are always welcome at monthly League meetings held at Comstock; schedule dates and times are available on the League’s website, at WiltonLWV.org.