Wilton’s Registrars of Voters, Karen Birck and Annalisa Stravato have more to juggle for Election Day than ever before. Not only must they oversee a complicated election process at three polling sites (plus one at Town Hall for Election Day Registration voting), ensure there are no errors, guarantee that each voter’s enfranchisement rights are upheld, and make sure votes are tabulated and reported in a timely way to the CT Secretary of State, they also have to do all that in a way that keeps voters, poll workers and others safe under the threat of the COVID-19 pandemic.

But they also have a track record for efficiency and running a tight operation. We spoke with Birck about what’s going to happen on Tuesday, Nov. 3 so that readers can get a clear picture of just how things will operate and be handled.

Voting Districts: Where do I vote?

Wilton is divided into three voting districts for all November elections (see below). All three polling places will be open from 6 a.m.-8 p.m. on Election Day. If you don’t know in which district you live, don’t fret:  the registrars’ webpage on the town website has a link to the voting district map. Look up which district you’re in and where you vote on the Secretary of State’s website. 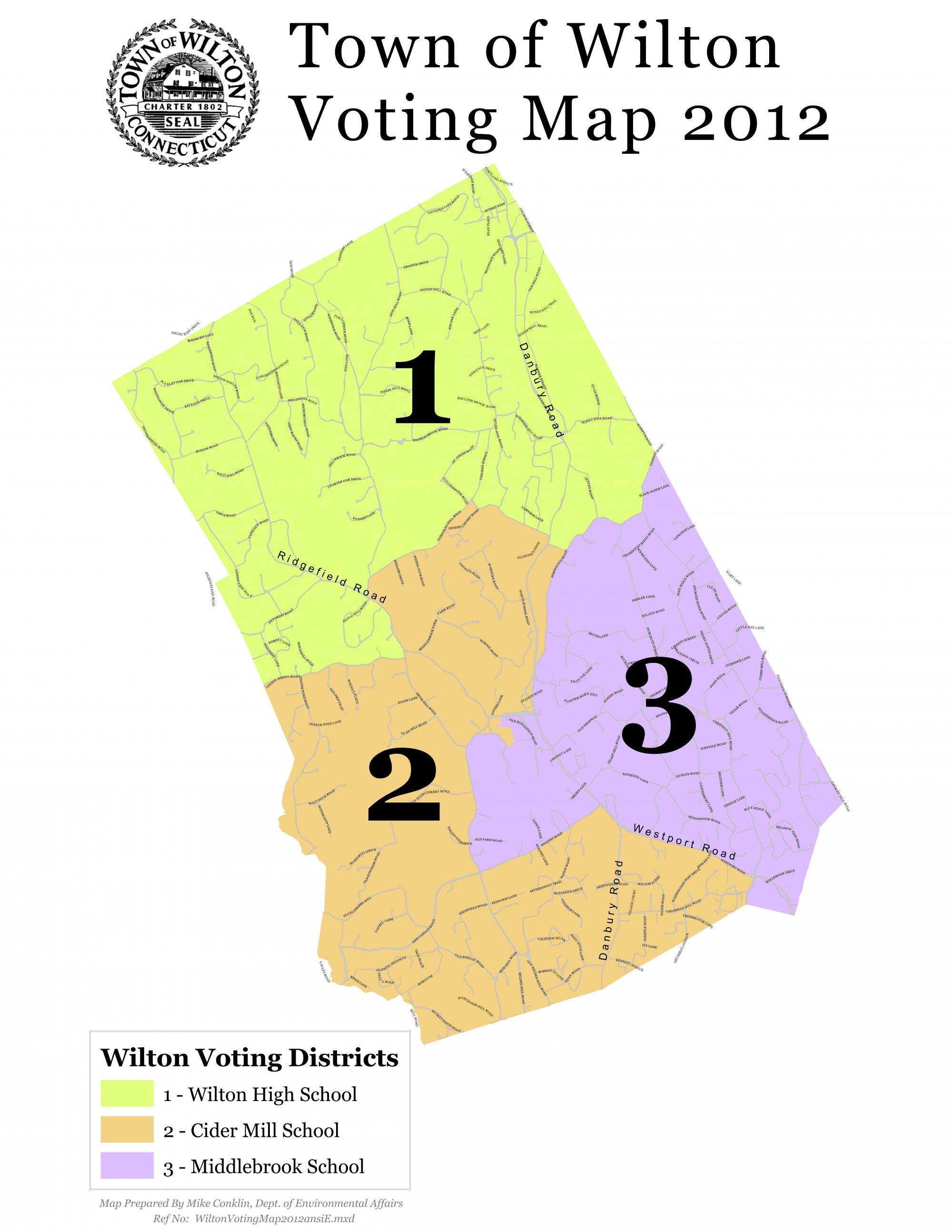 Registration: Am I registered? What can I do if I’m not?

You can check your voter registration status via the registrars’ webpage on the town website.

If you are not a registered voter but want to exercise your right (and responsibility) to vote, there is still one last option:  Connecticut offers Election Day Registration on Election Day.

Election Day registration (EDR) will be at Town Hall (238 Danbury Rd.) beginning at 6 a.m. and ending promptly at 8 p.m. EDR voters must prove their identity and Wilton residence (and a CT drivers license with a Wilton address on it will suffice for both). Allow extra time for registration and processing.

Important to note: The EDR location closes promptly at 8 p.m.; however, any elector in line by 8 p.m. at the other three polling places will be allowed to vote.

Do I need ID to vote?

Voters are asked to show ID to vote in Connecticut. Identification is any pre-printed form of ID that shows your name and address, signature, or photograph (e.g.  Social Security card, driver’s license, school ID, etc.).

If you do not bring ID, you can still vote. You will be asked to sign an affidavit instead and then vote normally. First-time voters without ID can cast a provisional ballot.

Will there be lines?

Birck anticipates the possibility that there will be lines at Wilton polling locations that people aren’t used to seeing, but she said it’s hard to accurately predict. No matter what, she did have one request of voters: “We ask everyone to be patient and respectful. We’re doing the best to make everyone safe,” she reminded.

What Protocols will be in place at the Polling Place?

Just as they did for the August primaries, the registrars have worked with Wilton Public Schools staff, Wilton Health Director Barry Bogle, and the Department of Public Works to plan with safety in mind.

Voters will be met at the door of the polling precinct by a greeter, who will offer gloves to everyone entering the polls. The greeter is also responsible for making sure that people maintain social distance if there are any lines to get into the polling locations.

Each polling place will utilize separate entrances and exits and one-way traffic, to minimize people crossing paths as much as possible.

Inside, social distance is also the overriding theme. Each voter check-in table and voting booth will be spread far enough apart that everyone should be able to maintain a minimum of six feet of social distance.

Poll workers will be separated from voters by plexiglass, and the registrars will have plenty of masks, wipes, sanitizers, and gloves on supply for anyone staffing the polls. There will also be extra masks for any voters who don’t have them.

Given the increased COVID-19 risk for people who will work inside the precincts, there was speculation about whether the registrars would have any difficulty getting poll workers. “There were a lot of people interested,” Birck said happily. “In fact, we couldn’t accommodate everyone who stepped forward.”

Are Masks a Must?

The state of Connecticut is currently operating under an executive order mandating the wearing of masks that cover a person’s nose and mouth when they are in a public space indoors or outside, if they cannot maintain social distance.

Poll workers must wear masks at the precincts, and while masks are not required for in-person voters they are strongly encouraged to wear face coverings.

Birck said that the Secretary of State’s office released guidance for registrars in case a voter wants to vote but isn’t in compliance with the current mask mandate.

State officials have advised registrars that the moderator and poll workers “should offer the voter options to vote in a manner that does not endanger the health of other individuals in the polling place.” Those options include offering the voter:

What if a group of maskless voters show up, or if a situation turns ugly? According to the Secretary of State’s guidance, “If multiple voters who are unwilling or unable to wear a face-covering or mask, seek to vote, poll workers should make efforts to funnel these voters outside, using best efforts to ensure six-foot spacing. Should any voter become unreasonable or attempt to interfere with the process of voting, they should be removed from the polls by the moderator or a police officer if necessary.”

According to Birck, the state statute allows registrars of voters to make that call. “We have decided not to allow them. We’re also not allowing ‘unofficial checkers’ and it has everything to do with COVID, not the political environment,” she noted.

Speaking of keeping politics out of the precincts, don’t even think of wearing clothing or other items bearing a candidate’s name or likeness–that includes shirts, masks, pins, and hats.

When will all the votes be counted?

Precinct results: Once polls close at 8 p.m., the moderator at each polling place will print a report from the vote tabulator. Those will be unofficial preliminary totals from each of the three precincts.

Election Day Registration (EDR) ballots: EDR ballots cast at Town Hall will also be run through a ballot counter after 8 p.m., and that report will also be printed and posted.

Absentee Ballots: Wilton’s Town Clerk Lori Kaback reported that her office had issued 5,276 absentee ballots for this election, and 3,882 have been returned, as of Monday afternoon, Oct. 26. For perspective, compare that to Election 2018, when 1,134 were issued and 1,053 returned–or the last presidential election in 2016, with 1,472 issued and 1,350 returned.

Absentee ballots can’t be counted until Election Day in Connecticut, and the unprecedented number makes counting absentee votes even more complicated. Registrar staff will begin running absentee ballots through a tabulator at 6:30 a.m., and Birck said they’re planning on two shifts to work through the day until after the polls close.

So, what about absentee ballots dropped in the ballot box (in front of the police station) by 8 p.m. on Nov. 3? Those get counted on Nov. 4, but not until the registrars double-check if any ballots were cast by someone who also cast a ballot in-person at a precinct.

Official vote counts:  CT state law give registrars 96 hours from the close of polls to report results to the Secretary of State. That’s Saturday at 8 p.m., which means Connecticut’s overall totals might not get finalized until Monday, Nov. 9. Birck says her office “fully intends to have ours done sooner than Saturday.”

GOOD Morning Wilton will announce results as soon as they’re printed and posted.

LETTER: Democrats Say ‘Thanks’ After Elections