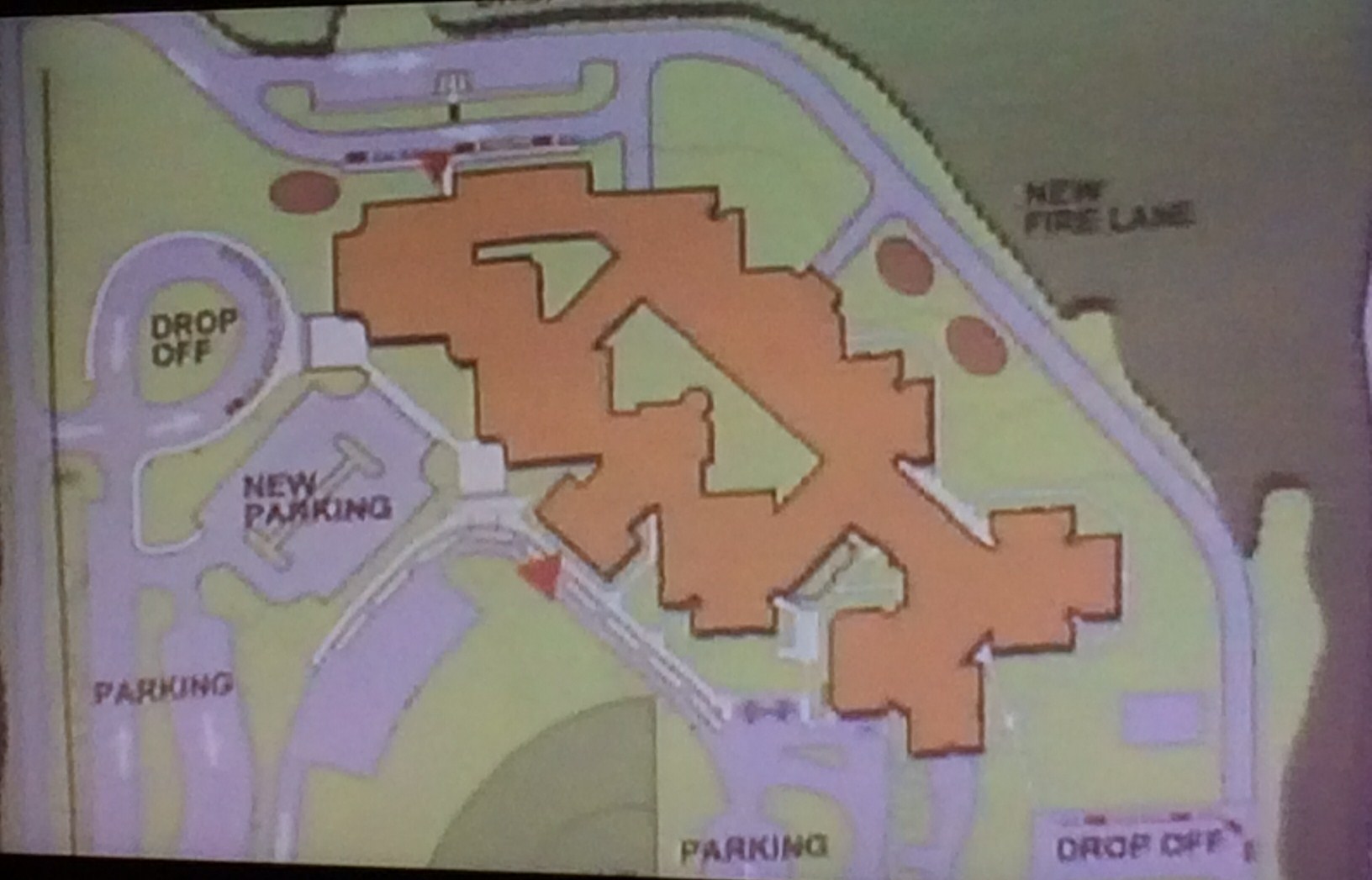 At last week’s Board of Selectmen‘s meeting, the Miller Driscoll Building Committee (MDBC) presented their recommendation for a proposed renovation plan for Wilton’s K-2 Elementary School. Based on the original statement of requirements, interviews with stakeholders (including school district staff, parents, security task force and others), and evaluations by project architects Tai Soo Kim Partners (TSK), the committee of 13 appointed members have “unanimously” recommended a renovation plan.

Renovation was determined to be the path of choice in September 2012 when the Miller Driscoll building was found to be “sound and structurally to have a significant life ahead,” according to MDBC chair Bruce Hampson, after what he said was “extensive examination.” The team evaluated five plans with very specific project objectives in mind:

Hampson said the committee narrowed their choice of renovations plans from five down to two that they determined were viable. Of the two, the option the committee calls “Option One” is the one they unanimously recommended, even though it exceeds budget guidelines set out by the selectmen; “Option Two” falls within the recommended budget numbers.

“We believe it represents the best value for the schools, for future educational needs and ultimately for the town,” Hampson explained.

He did remind the BoS that, “This is a renovation, it is not a new building. It is a compromise.” The goal of the committee, he said, was to look at “how to preserve what works in the current building–there are things that work and are good–and change what doesn’t.”

Randall Luther, the lead architect from TSK outlined the major requirements that need to be addressed by the renovation, including: “Option One” (pictured above) would locate the Pre-K wing in the back of the building at the lower level, and enable the current preschool section of the building to be demolished. This option would also relocate the playground areas to the rear of the school. According to Luther, this would improve circulation, parking and security. This plan would also replace the “Peach Core” section of the school with a new addition that would help organize the school in a better way, as well as increase flexibility. One major change would be the creation of one central cafeteria within the new addition. It would also free up the gym space for more dedicated play space as well as create an all purpose room area with a stage.

According to MDBC vice-chair Karen Birck, “the value that is added by Option One is that it greatly improves the efficient functioning of the building as a learning and teaching environment; it creates a [better] connection between pre-K and the K-2 program, to encourage more collaboration; 25 percent of the total school square footage will be new construction and almost one-third of the classrooms will have a more efficient rectangular layout.” She added that the new cafeteria layout and playground relocation would reduce congestion, improve circulation and it will reduce travel time for the children in the building–adding to increased learning time in the classroom. Birck also mentioned that it would be more energy efficient.

Terrie Schwartz, who represented the Wilton Security Task Force, told the selectmen that from a security perspective, “Option One was clearly better.” She cited the fact that the option would create a sense of security with the new configuration, especially with improved sightlines at the front of the school; enhance security by removing areas hidden from view; and protect students with play areas relocated to the rear of the building.

“Option Two” leaves the existing structure largely as it is today, with the exception of relocating the preschool to the lower, rear area of the current building. The same two-cafeteria plan that currently exists would remain, as would the parking and playground configurations. Luther explained that the similar configuration would continue to limit the school community and hamper flexibility.

Birck related a comment from a teacher who reviewed both options, and said, “Option Two is an expensive Band-Aid.”

Hampson mentioned the improvements that will be made to the HVAC systems, which he said will “meet the most stringent codes in the U.S.” and that the new design–to be used in either Option One or Option Two–will be optimal for “high quality indoor air quality.”

Responding to a question from the selectmen, Luther explained that any improvements and renovations would help reduce energy costs and because the footprint from Option One would actually be smaller than it is now, such savings would be even more significant.

Ty Tregellas from Turner Construction provided what he called “broad brush stroke” cost estimates for both options, calling them “conceptual numbers, based on conceptual drawings.” The numbers he showed to the selectmen as estimated costs to Wilton were $38,889,000 for Option One and $34,811,000 for Option Two.

He also estimated length of time each option would take: Option One would require 135 weeks of construction; Option Two, 97 weeks.

One thing he did mention was that when construction happens, any kind of “hazmat” concerns are monitored by a third party hygienist, and are rigidly structured, including barriers, timing and planning protocols that require approval.

He also mentioned that security is a new topic when it comes to school construction and renovation, but that there “are no actuarial numbers that support construction workers threatening or attacking a school, as it were. But we would isolate our program. We do badging, so we know who is on site. We do background checks to the extent allowable by law.” Having workers work ‘on shift,’ for example starting at 4 p.m., would likely add a $1.35 million premium.

Hampson explained that he also asked for estimates from Turner Construction on what building a brand new school would cost. Tregellas told the selectmen that it would likely cost in the ballpark of $59.7 million dollars, and would likely necessitate building in a completely new location in town. However, he said that was a “very rough estimate.”

In addition, part of the discussion centered on how the state of CT is actually discouraging towns from building new schools, and as a result they would penalize communities proceeding ahead with new construction by lowering the amount of money they reimburse to help out with such projects.

Given the lower rate of reimbursement and the inability to build on Miller-Driscoll’s current Wolfpit Rd. location, plus that the cost is seemingly prohibitive to Wilton voters, the selectmen have discouraged pursuing that route.

First Selectman Bill Brennan said, “We would all like to build new schools, new town halls, new fire stations, new everything. The reality is we don’t have the sufficient funds to do that, nor would it be acceptable to our citizens who would have to pay for it. So we have to find the best balance to find the most value for the objectives we are trying to accomplish. And that we are not wasting money by renovating a poorly constructed school.”

Selectman Ted Hoffstatter asked what the life expectancy of the building will be after renovating it. Turner Construction’s Tregellas estimated it would net the town another 25-30 years of usage. Brennan said that the BoS would “ponder” the MDBC’s  for a few more weeks, noting that the numbers would come under particular scrutiny. “We have to be really sure with these numbers. Where we have made errors in the past is where we have underestimated costs, particularly on the school side of town. A lot of the projects have been poorly estimated for cost, by the time we do them we end up paying more. We have got to be on the money with this.”

Hampson responded, “You’re talking to the team that handled the High School renovation, which was estimated at $20 million, and we did it for $17 million.” The selectmen have set their March 3rd meeting as the date to take a vote on the project question.

The committee has a website for the project that has been created for the public.