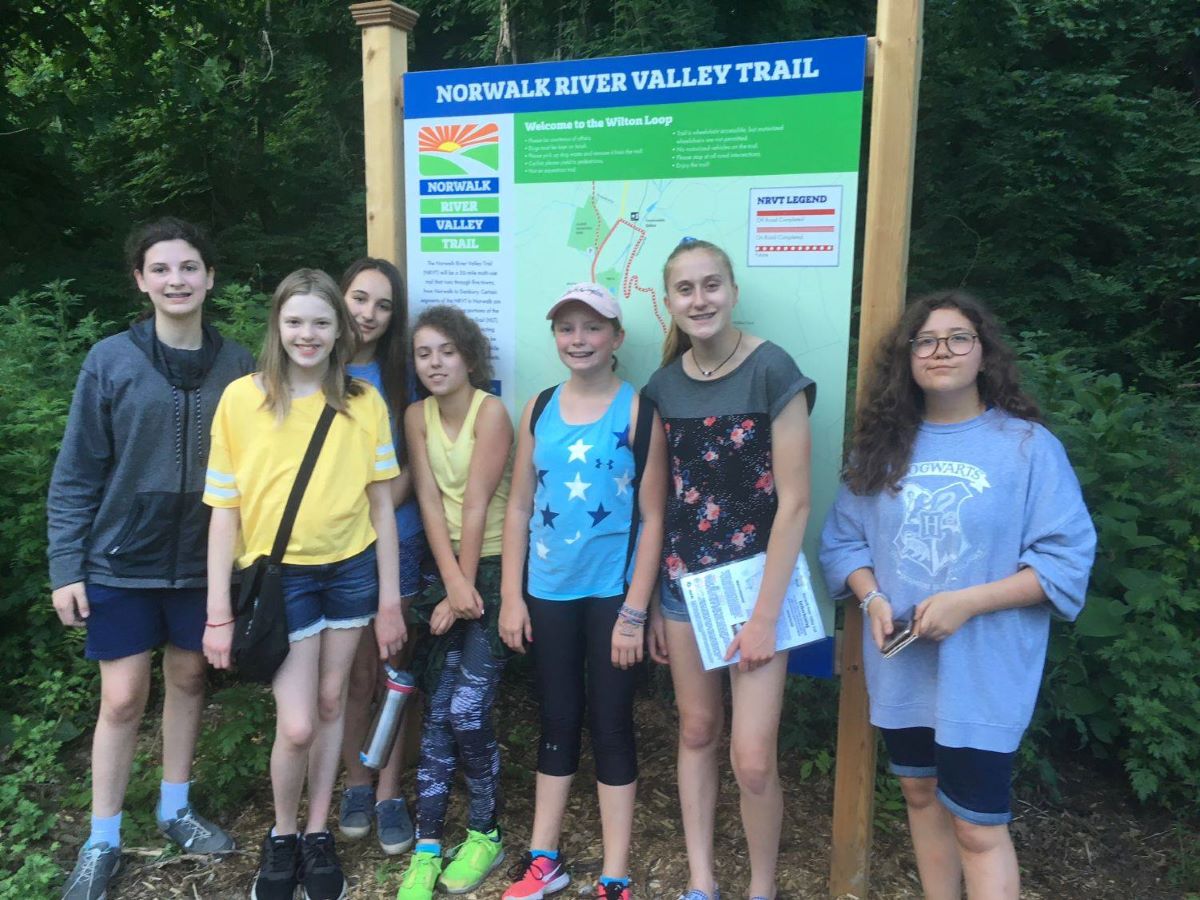 With summer’s arrival, kids and parents alike crave new sources of outdoor adventure within Wilton. But how many make it happen? Eight 13-year-old Girl Scouts, with some grit, leadership, and creativity, have done just that.

In letterboxing, participants embark on a treasure hunt-like quest for hidden boxes on certain trails, parks, or other public spaces by following a series of clues. Once one box is found, participants stamp an attached journal, and then analyze an attached clue to find the next box. Participants are invited to leave messages in the notebook as well.

For the Wilton letterbox adventure, eight boxes–one made by each girl in the troop–are slyly camouflaged in unique hiding spots throughout the NRVT. The hunt for boxes 1-5 embarks from the Rte. 7 commuter lot entrance on Danbury Rd., while the quest for boxes 6-8 follows the Autumn Ridge Dr. entrance. Clues for box one and six can be found on a flyer on Wilton’s NVRT Welcome Board by the Rte. 7 Entrance and on the Wilton Letterboxing Trail at the NVRT Facebook Page.

Participants must be prepared to think creatively to crack the girls’ carefully designed riddles and rhymes, and to soak in each of the trail’s nooks and crannies to make sure no hiding spot goes unexplored.

A traditionally English activity, letterboxing became increasingly popular in the United States in the late 1990’s after a feature article in the Smithsonian Magazine. Locations include Weir Farm, where the girls were first introduced to the idea on their quest to earn a badge. Passionate about the outdoors, the troop saw letterboxing as an opportunity to motivate more kids and families to get outdoors, fulfilling a niche they saw in the town. It will also mark a great opportunity for young Girl Scout troops in the area to earn their letterboxing badge without traveling, a way to give back to an organization the girls clearly love.

Troop member Masterson explains the project was inspired by the girls’ desire to get more of their peers off their phones and outside. “We wanted people to come out and go on the trail. Some people may get bored just walking back and forth… we thought if we put letterboxing on it, more kids would find it fun and want to [walk it].”

This endeavor was a Girl Scout’s “Take Action Project,” a collaborative effort by the whole troop to identify an area of need in their community and work to create a long lasting, positive impact. The project was completed in the Cadets’ pursuit of the prestigious Girl Scout Silver Award, what troop leader and former Girl Scout Jennifer Bendett describes as a “huge accomplishment.”

“It’s a big project,” Bendett reflects. “It’s not just something they can earn overnight. It’s a commitment.”

Making this change in the community was no simple endeavor. The project took six months to accomplish, but adamant and determined, the girls launched the project in January with a presentation to the Friends of the Norwalk Valley River Trail board to advocate for their idea and get it approved. The girls had to answer questions about how to promote the idea, how to make sure it wouldn’t impact the environment, and how it would be monitored.

The girls then spent the next few months scouting locations on the trail for the boxes, building and hiding the physical boxes, and making clues, Masterson’s personal favorite part. “When you go on the trail you’ll see the clues are really funny” she adds. “It was definitely a lot of fun to make the riddles and rhymes. We all did it together.”

Looking at nature through a creative lens thrilled the girls during the process, and they hope this project will inspire this creativity in every participant.

The Take Action Project is one of the last endeavors the troop will take on all together, marking a bittersweet milestone for a troop that has been together since Kindergarten.

Bendett, troop leader since the start, reflects on how “amazing” it has been to watch the girls grow. “When they were 5-year-old Daisies, it was a lot of craft projects, sort of like a big play date… Now they are really so independent, smart and articulate on their own and as Cadets, really lead the troop in terms of what their interests are.”

Masterson remarks the troop hopes letterboxing will encourage “staying healthy in a fun way and using the trail” within the town.

“It’s such a wonderful resource,” Bendett observes about the trail, adding that letterboxing is a great “extra way for people to stay engaged and be involved in nature.”

For all Wiltonians looking for some excitement to spice up their next sunny day, Troop 50471 has that covered. Lace up those sneakers, grab some sunscreen, and, with the first clue included below, GOOD Morning Wilton wishes you the happiest of trails.

Clue #1: “Start at the Route 7 commute lot. Find the board at the trail head and snap a picture of these clues. Start your walk on the trail. Cross 2 roads and after the mini stop sign you will pass 2 big rocks on the right side of the trail. Look for the 4 pointed tree, what you are looking for, there it will be. (80 kid paces from mini-stop sign).