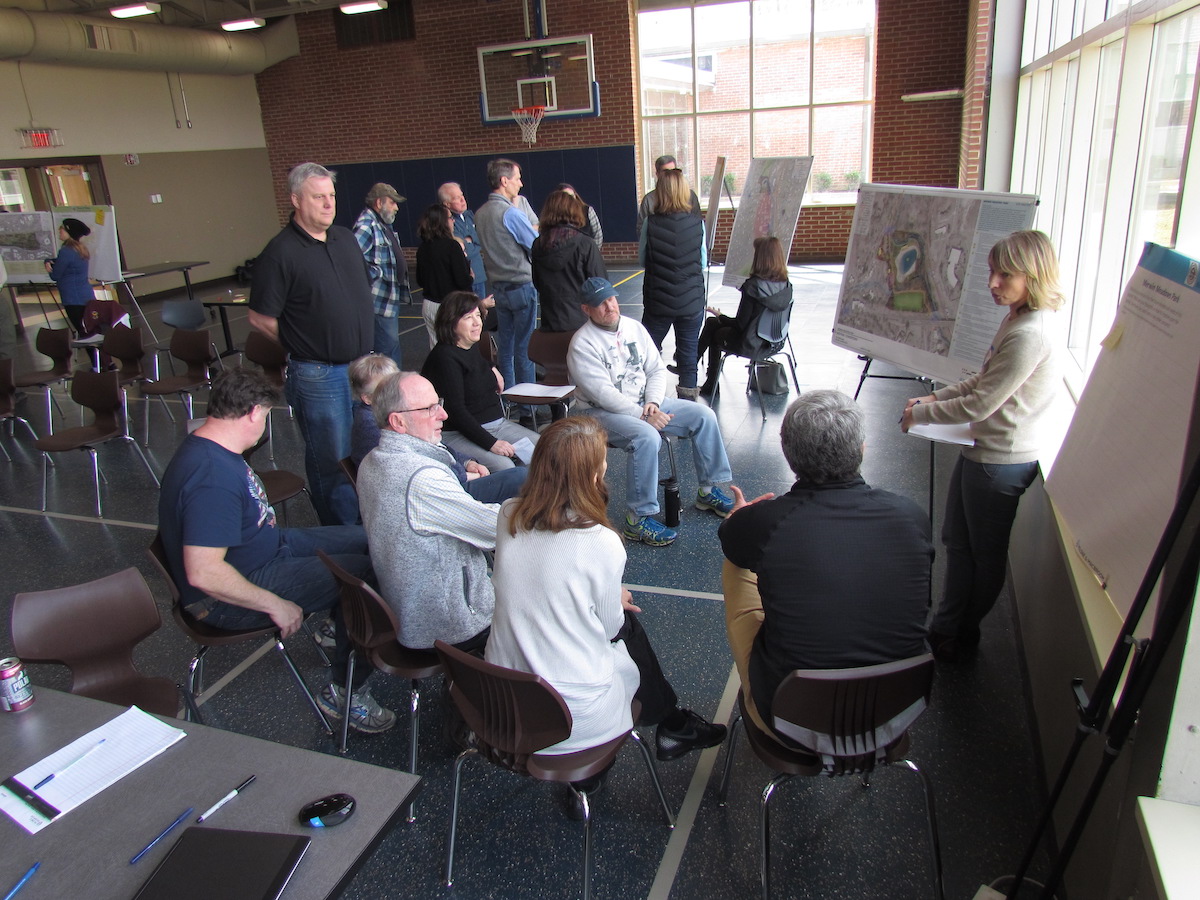 On Sunday, March 24, Wilton officials held the first of two preliminary meetings designed to get resident input on possible changes to Merwin Meadows and Schenck’s Island. The two open public spaces are visible parcels in the center of town and central to much of the recreational activity under municipal aegis.

The meeting was led by Milone & MacBroom (M&M), an engineering, planning, landscape architecture, and environmental science firm, that was selected by the town to develop a concept plan for a passive recreation plan for Schenck’s Island and a renovation plan for Merwin Meadows.

The number of residents that attended the meeting was underwhelming–fewer than 20 residents showed up to the session at Comstock Community Center on Sunday afternoon to take part.

Michael Doherty of M&M led the meeting and explained that the overall goal was to help residents define and identify for themselves how the two spaces should be reshaped, by getting a “snapshot of what the community’s group priorities are” for each of the spaces.

The objectives, he said, were improving the spaces; defining how the public could use each space in ways that were complimentary and which don’t double up on potential uses; encouraging stewardship of the natural environment; discovering the potential of each space for economic development as bookends to Wilton Center; bettering both spaces for all generations; and overall, refreshing, renovating and reimagining the parcels.

The M&M team asked participants to look at each space and identify their personal priorities in five areas:  connectivity; community; nature; recreation; and structures and amenities. The meeting allowed the participants to breakout into three smaller groups to discuss specific ideas and feedback.

While some participants were interested in suggesting new facilities and amenities, including new structures and events, other attendees expressed an interest in advocating for no changes and less activity, especially at Schenck’s Island, out of concern for environmental impact and damage. Care for the meadow habitat and the maintenance of the park at that location was of particular concern for some residents.

Resident Don Sauvigne made a statement that seemed to generate support from several other participants, reaffirming the protection of the natural environment but also trying to capitalize on what the two spaces could offer back to the town–especially in the context of being located in the town center and providing opportunities for connectivity and events that could tie into the economy of the town.

“How can we understand this from a business sense, and take a longer view, to enhance the value of these spaces that makes the town stand out better, by enhancing them, and also how can we create revenue, without increasing taxes or fees, by finding other uses, without violating the intent of both locations?” Sauvigne asked.

Doherty reinforced that M&M was not advocating for any wholesale change, nor had the firm prepared any master plan for the spaces. “We’re just trying to get guidance, and want a vision based on community input, not ours as designers. We want to hear from you,” he explained.

The preliminary exercise reinforced that people were interested in focusing on structures, amenities, and recreation as the highest priorities at Merwin Meadows; and at Schenck’s Island, the priorities for focus there were community and nature.

Milone & MacBroom has a second opportunity scheduled in April for additional feedback. They will compile the community feedback from Sunday’s meeting as a basis for discussion at the next meeting on Sunday, April 28, from 1-3 p.m. at Comstock Community Center.