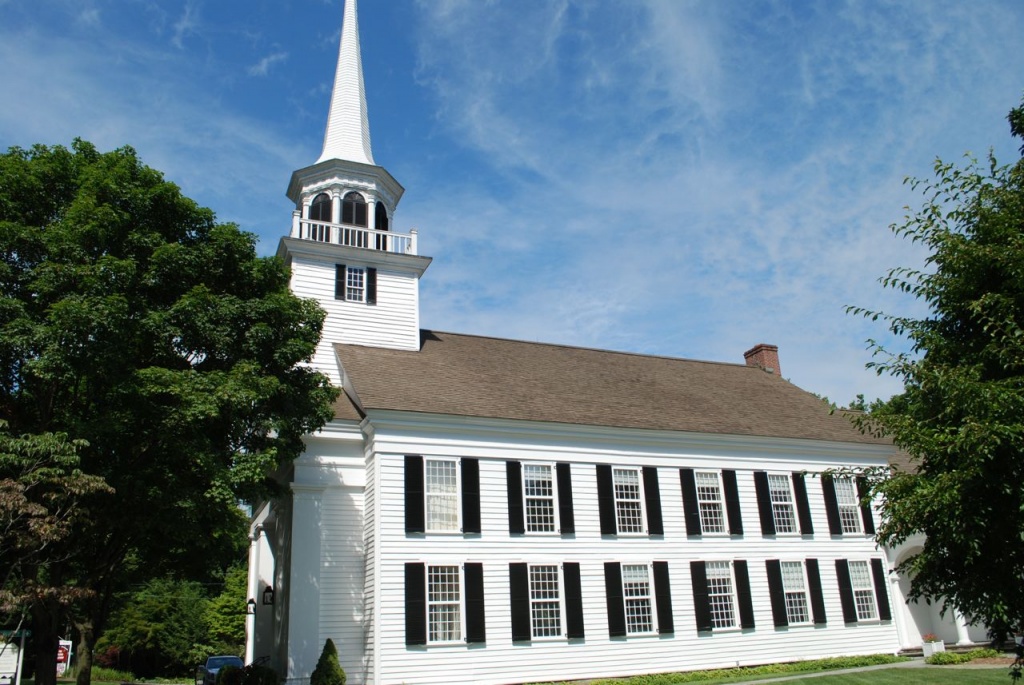 Wilton’s Historic District and Historic Properties Commission met Tuesday evening, June 1, to consider an application by the Wilton Congregational Church for a “certificate of appropriateness” (COA) for the installation of a new emergency generator.

The church wants to install a generator to provide power during major power outages, which would enable the church to be “opened to the community as a heating/cooling shelter, soup kitchen, and charging station during these emergencies.”

A COA is required for any alterations which can be seen from any right of way on properties located in historic districts. Built in 1790, Wilton Congregational Church, located at 70 Ridgefield Rd., has been designated as such a historic district.

“No building or structure within a historic district or designated historic property can be erected, altered, restored, or moved until a Certificate of Appropriateness application has been submitted to and approved by the Commission,” according to the town website.

Giff Broderick, chair of the Building and Grounds Committee at the church, presented detailed plans to the commission. (The COA application materials can be found on the town’s website.)

As proposed, the generator would be located on the northwest corner of the church’s property, adjacent to Lover’s Ln., in a parking area that is currently paved.

The church retained the same architecture firm (Paul P. Bailey, Architect, of New Haven) that designed the church’s sizable 2008 addition, in an effort to make the generator’s enclosure “in keeping with the historic facade of the church.”

A rendering (seen below) of the structure shows how it would look from the Ridgefield Rd. vantage point.

Cognizant of the generator’s visibility and potential noise disturbance to neighbors, the church carefully considered all options, but ultimately determined the proposed location would be best, Broderick told the commission.

He explained that locating the generator behind the church was not feasible for a number of reasons, including the location of drain pipes, a handicap access ramp, and necessary truck access for deliveries, recycling, and other church operations.

Though at the expense of some parking spaces, the proposed location was “the best compromise,” Broderick said. “We’re limited on where we can put this generator.”

The two closest neighboring homes would be 125 feet and 190 feet, respectively, from the generator.

The church’s COA application reflects the church’s effort to redesign and enlarge the generator’s enclosure in a way that would not only “meet the stringent noise requirements of 55 dba at the property lines” but would have an added benefit of obscuring, at least partially, an electrical transformer that is already located there.

Reaction by the Commission

The commission reviewed the church’s initial application back on April 6. Commissioners acknowledged that the church’s latest plans took their earlier feedback into account, notably in terms of improved soundproofing and visual appeal.

They particularly liked the stonework envisioned for the base of the fencing, which would relate to the existing stonework at the historic church. The white clapboard look (wood or possibly composite material) was also seen as consistent with the church’s architecture.

Still, commissioners were quite wary of certain aspects of the applicant’s plans.

Of greatest concern was the fact that the fencing would not fully surround the generator. It would only be on the south and east sides, with just a short return on the Lover’s Ln. side.

With most of the side facing Lover’s Ln. unfenced — and with only a 10-foot setback — the commission felt the visual impact from Lover’s Ln. could be a significant issue.

Broderick countered that the landscaping (namely mature forsythia and shrubbery that is already there), along with a “significant elevation drop” on Lover’s Ln., reduced the need for fencing on that side.

Without a rendering of the view from Lover’s Ln., the commissioners were unsure how to assess the visual impact.

Also of concern to the commission was the overall size of the structure, which is a full 40 feet on its longest side. The fencing would be six feet tall, slightly shorter than the actual generator enclosure.

“We’re trying to be good stewards to the community,” Broderick said, hoping to satisfy the commission and weighing all factors against the benefits of having an emergency generator for the community.

In the end, commission chair Allison Sanders indicated she was not yet comfortable with the commission voting on the application. She said she preferred to wait until the church received decisions from the other town boards involved in the decision process, to be sure no further modifications would be made.

Approval has already been given by the Inland Wetlands Commission. In addition to the COA application with the Historic District Commission, the church must also obtain approvals from the Zoning Board of Appeals (ZBA) and the Architectural Review Board (ARB).

Broderick indicated he has not yet received a date for ZBA and ARB reviews/decisions.

He clearly had hoped to obtain the Historic District Commission’s blessing at the June 1 meeting. Sanders assured Broderick she did not wish to hold up the church’s plans and would hold a special meeting over the summer to avoid further delay.

While he said the church had hoped to install the generator in time for hurricane season, Broderick feared the window of opportunity might be closing due to the time required to get through the town’s review process.

“[It’s a] big generator, directly on the road. I would be surprised if questions were not asked,” Wrinn said.

Wrinn noted that the church’s application has been evolving, including the addition of the enclosure box to improve noise control. “This added a requirement that they revise their application to ZBA, to add a coverage variance along with the setbacks variances they are asking for,” Wrinn explained.

Those variance requests are significant. Wilton’s regulations call for 50-foot setbacks, but as the site plans pictured above show, the generator would have a 10-foot setback on two sides of the property.

Broderick told the Historic District Commission, “We’re meeting the state’s noise requirements which are more stringent than the town’s. Frankly, there’s nothing more we can do. If this doesn’t get through ZBA, the project would just have to be canceled. We don’t know of any other place to put it.”