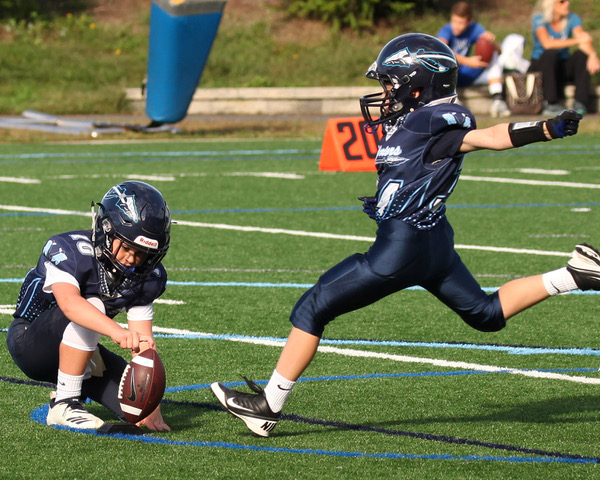 The Wilton offense was led by Kerry Dodman, Charlotte Mannix, Kelly Mancuso, and Preethi Vijay with both Claire Rosolen and Rachel Phippen finding the net as a result of the efficient ball movement. Defensively, Sasha Handel, Lilah Crispino, and Nitya Pandit were relentless in stopping the Westport attack. Ava Ray and Kara Mobyed mined the Wilton goal with skill and purpose.

The Wilton Girls White U14 earned a well-deserved and exciting victory against Westport, 2-0 on Sunday.

In the second half, Lamond scored Wilton’s first goal with a free kick. Alger, scored the second goal with a great shot, finishing the game with a win of 2-0.

The Sunday matchup between Wilton Girls White 2010 and Westport’s U9 Gold team resulted in a 0-0 tie.  Wilton dominated the first half offensively, but was unable to connect with the net. Amazing offensive runs came from Savannah Quick, Lillian Flatt, Taylor Setterlund, and Avery Galligan. Defensively, Nora McGrath, Hannah Hall, Mia Bayonne, and Ellie Satrazemis worked together to keep the ball moving. Samantha VonLoeser‘s powerful defensive kicks out of the backfield prevented Westport from gaining possession. Sophie Duvall and Ava Lafiosca had impressive stints as goaltenders for Wilton each making three important saves. (Allison Massaua is sidelined with a wrist injury hoping to return to playing soon.)

On Sunday, Sept. 23, Wilton Girls U9 Blue faced off against archival Darien at Merwin Meadows field. It was a highly contested game between two evenly matched teams. Darien actually came into the game undefeated. In the first half both teams went back and forth with strong rushes at the net. Wilton was led on the offensive end by Zoe Blum, Grayson O’Donnell, Victoria Jankowski, Audrey Lepore and Andie Langeland. Unfortunately, Darien struck first in the first half to take a 1-0 lead. Wilton kept the score 1-0 at halftime because of strong defense by Sophia Solomon, Sadie Sherman, Gabby Ray, Ally Phelan and Madeline Rayment. Alexandra Jankowski was strong in goal making a few saves to keep Wilton in the game.

In the second half it was a different story, with Wilton outplaying Darien. Wilton had some nice rushes to the net by the aggressive play of Phelan, Lepore, Ray, Langeland, Rayment and Blum. Wilton’s restless pressure finally paid dividends when Jankowski scored the tying goal midway thru the second half. The rest of the game both teams went back and forth with excellent rushes. Wilton had some strong clears defensively by O’Donnell, Sherman and Solomon that kept the scored tied. The goaltending in the second half was stellar by Victoria Jankowski. Wilton did have a late rush by Casey O’Connor that the Darien goalie made a great save on to keep the game even. The game ended in a hard fought 1-1 tie. It was a great soccer game to watch.

Wilton’s boys U10 Blue, led by Coach Ritesh Mitrey, played a hard game on Sunday versus Stamford. Wilton’s offense, Jacob Albanese, Philip Jeschke and Sean Kaliski started off strong and had two quick goals by Jeschke and Albanese. Wilton’s goalie for the first half, Jack Hamilton did a great job keeping the score 2-3, he had multiple saves. Wilton’s defensive team, Caio Thakur, Giacomo DePaola and Gavin Toohill supported the goalie and diligently kept the ball upfield.

As second half goalie, Toohill had many impressive saves. Throughout the game Mario Coppola, Joshua Comiskey, Hugo Dall and Gavin Levenherz were able to play both defense and offense to support their team. It was an intense game and although these boys fell short 2-7. they never gave up the fight.

The 6th grade Warriors got off to a fast start on offense and forced three turnovers to keep the Blue Wave off the scoreboard. Wilton marched down the field on their first drive behind stellar line play from Maja Driscoll, Cole Galante, Jack Huntley, Ryan Luchetta, Liam McKiernan, Ryan Meenan, Jack Santosky, Cole Siegel, Jaxon Thomas, and CJ Young.  Henry Soojian, who was slowed by an injury this week, cheered on his teammates from the sidelines. Luke Ginsburg took the hand-off and scored a touchdown from five yards out to put the Warriors up early. Two drives later, Wilton engineered a long, nine-play drive with Cael Dexter and Jack Schwartz moving the ball consistently down the field. Liam Snyder capped off the drive with a pass to Ray Ferranti for the second touchdown of the game. On Wilton’s next drive, Dexter broke a 40-yard run for the final touchdown of the game. Ginsburg was perfect on three “live” extra point attempts, giving the Warriors a 24-0 lead.

The defense did the rest, consistently getting into the backfield to disrupt the Blue Wave offense and forcing turnovers. Darien’s offense had barely gotten started when Ferranti forced a fumble and Siegel was there to recover the ball for the Warriors.   The second turnover came when Driscoll put pressure on the Darien quarterback and Ryan Stocker came up with the interception.  On Darien’s next drive, Stocker came up with his second interception of the game at the goal line, robbing Darien of their best scoring opportunity of the day. Strong tackling from Ferranti, Siegel, Ginsburg, Young, Schwartz, Santosky, McKiernan, Luke Perna, Huntley, Will Cristini, Cole Galante, Snyder and Charlie Keller shut down the Darien offense and sealed the shutout for the Warriors.

The 4th Grade Warriors faced another formidable New Canaan Rams team this past Saturday on Dunning Field; the first day of Fall provided perfect football weather. The Rams won the toss, and the Warrior Defense took the field, and began with punishing tackles from Denny Dustin, Liam Pierson, and Nick Skillin, all topped off by a Jaxon Lin fumble recovery! The Warrior offense answered by unveiling the ‘Beast Package’–Pierson at quarterback; flanked by Bly Christianson and Wyatt Kreter; August Furman at center; Mark Whitman, Finn Snyder, Jack Condon, Cole Herbst, Matthew Fogarty, and Wyatt Hoffstatter on the line; and Skillin as the wing decoy–forming a wedge on every play of the drive. After four Pierson runs behind the ‘Beasts’, the Warriors put six points on the board.

The Rams’ next drive was met with strong tackling from Michael Duarte, Brady Corry, and Colin Faherty, but ended in a touchdown pass and kick, making the score 6-8 in favor of the Rams. The Warrior offense went three and out. Despite strong defensive efforts from Charlie Heffernan, Trey Rivera, Cody Korpan, and Cooper Rekow, the Rams scored another touchdown followed by a kick to make the score 6-16. Before the end of the half, a promising drive ending with a Michael Lenz pass for a first down was called back due to a penalty.

The second half proved to be frustrating for the Warriors, despite offensive efforts by Dylan Flanagan, Colton Korpan, Cody Korpan, Emmett Sommer, Skillin, and Corry, followed by stoic defensive efforts by Henry Snow, Heffernan, and Skillin. A day that began with great hope ended in a 6-23 loss for the Warriors. Moving forward they must focus on all of the positive things that have happened this season, dig deeper, stay physical, and fix the mental mistakes. Win on three!

Saturday’s crisp fall air brought another victory for the 5th Grade Warriors against Darien’s White team, 22-0.  This win can be attributed to fantastic all around team work.

The first quarter saw a long drive ending in a handoff by Charlie Calabrese to Craig O’Neill for a first touchdown and two extra points courtesy of Mason Behar. Strong defensive play by Max Totten, Theo Satrazemis, Hunter Lishnoff, Evan Christianson and Josh Meltzer resulted in a Darien fumble that was recovered by Curtis Jackson to put Wilton back on the offensive.

A new play allowed O’Neill to run in a second touchdown and Behar to kick another successful two points. Marco Chila had an amazing day defensively, crashing through the middle and stopping Darien’s offense before they could even get started. More fantastic team work by Emma VanHeyst, Jake Padilla, Cayden Stevens, Ray Slough and Kieran Wiseman again shut down the Darien offense putting the halftime score at 16-0.

The third quarter opened with a pass play to Charlie Roy, who ran almost 50 yards for the Warrior’s third touchdown. Blake Ongley, Grant Santosky, and Trevien Goldman helped to stop any traction Darien managed, keeping the score 22-0. With less than one minute to go on the clock, quarterback Patch Angerame was brought in and threw a successful pass to running back Will Byrnes, ending the game in a third shut out for the 5th Grade Warriors.

The Wilton 8th Grade Warriors, who have been plagued by early season injuries this year, travelled to Ridgefield’s Tiger Hollow Saturday afternoon with a roster of only 14 eligible players. From the onset Wilton’s line on both sides of the ball was able to control the line of scrimmage.

After some back and forth on Wilton’s side of the field, Randol recovered a forced fumble on Wilton’s 6-yard line, eventually setting up a 99-yard touchdown pass from Capone to Rath to score Wilton’s second touchdown of the afternoon. Capone added the extra point. Edge pressure from Duncan and up the middle pursuit from Snyder forced Ridgefield into another three and out situation.

On Wilton’s first drive of the second half  Stengrim broke a 62-yard touchdown run up the middle behind key blocks from Garcia, Snyder and Enman. Stengrim added his third touchdown of the afternoon with a 55-yard interception run back. From that point on Wilton was able to run the clock down behind power running from fullback Duncan.  Wilton’s defensive line of Bobby DiPalma, Sam Kahn, Jake MacIntyre, Snyder, Garcia and Enman did an admirable job keeping Ridgefield’s running game at bay all afternoon with little or no substitution. The whole team was grateful for all of the extra conditioning they had received that week and were looking forward to more.