Monday afternoon, First Selectwoman Lynne Vanderslice announced her intention to run for reelection as Wilton’s top official. She did so in a announcement sent to GOOD Morning Wilton listing the promises she said she made to Wilton voters, and kept, “together with town employees and the Board of Selectmen” in the three-and-a-half years since taking office.

As she did during her campaign four years ago for first selectman, Vanderslice says she will not ask for or accept campaign contributions, and instead will self-fund her reelection efforts.

The promises Vanderslice says she made during her first campaign and fulfilled include:

In the announcement, Vanderslice calls herself a “pragmatic problem solver” and someone who builds “consensus between people of differing views and backgrounds.”

She points to several instances where she demonstrated leadership and a “willingness to stand up for Wilton’s best interests,” among them:

Vanderslice outlines initiatives she looks forward to working on in a second term, including a “Wilton Center master plan, renovations of the WHS stadium track and municipal buildings, improved recreation/athletic facilities, and shared services with other municipalities to further reduce costs.”

In campaign mode, she makes an appeal for voters’ support in order to work with her to keep what attracts residents to Wilton ‘true for future residents’:

“Residents were attracted to Wilton for our schools, our natural beauty and open spaces, our low crime rate, and our affordability versus surrounding communities. Together, we can ensure this, and more, remains true for future residents.

“Every day I wake up eager to work with our town employees and boards to achieve more for Wilton.  I hope my efforts and outcomes have earned your support.

Editor’s note:  Vanderslice requested that readers be able to access her announcement directly, and view the version sent to media. It is shown below 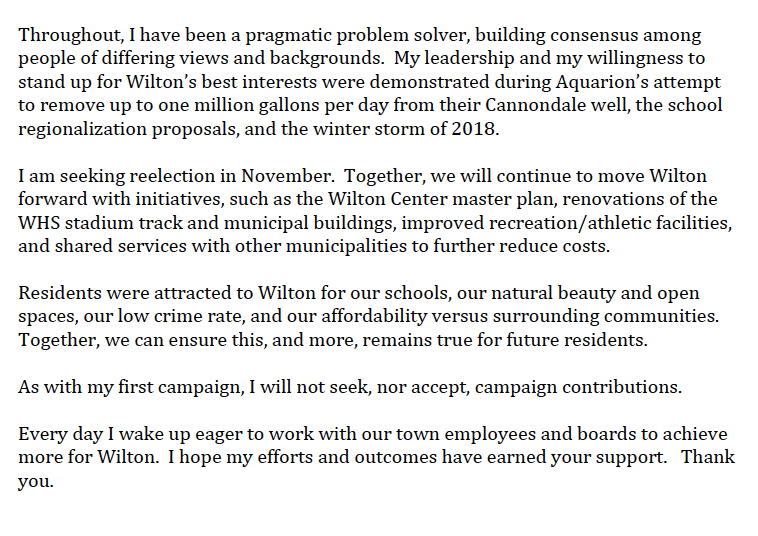